Happy New Year! It's 2009 already. I'm finishing up my 60th year on Earth, and we are already well into our 6th year in France. 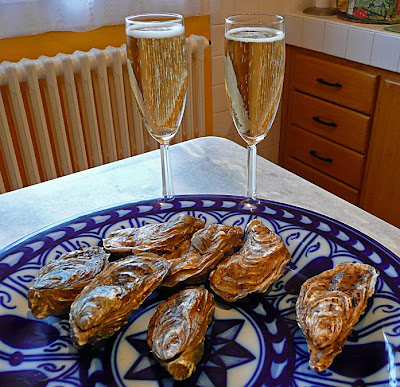 Oysters to be opened and Champagne to be enjoyed
New Year's Eve and France mean just one thing to me. Oysters! Fresh from the market. Washing them. Opening them. Making mignonnette sauce. Photographing them. Eating them.

Yesterday's post was almost all words with no pictures. Today's brings the picture average back up. 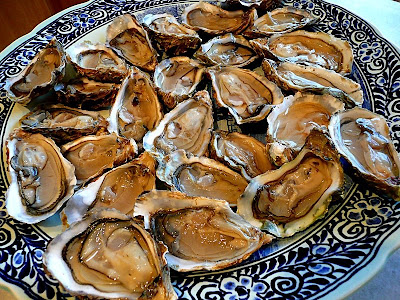 The oysters, 26 of them, opened and ready to eat
We went to the special New Year's Eve market in Saint-Aignan yesterday and bought two dozen oysters. That cost 8.00€ and the man selling threw in a couple more for the price. He was selling them at 5.00€ a kilogram. At the supermarket, they were slightly cheaper, but it's nice to get them at the outdoor market.

We got no. 4 oysters. Those are the next to smallest. No. 1 is the largest size. The smaller ones are better, to my taste, especially for eating raw. 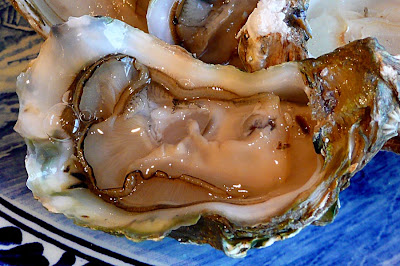 Une huître
How do you open them? With an oyster knife or a flat-head screwdriver. Hold the oyster with a thick towel all folded up to the right size, and insert the knife blade into the hinge at the narrow end of the oyster. Apply pressure and wiggle the blade around until it slips into the hinge and the oyster's top shell pops up. The insert a sharp knife into the shell, scraping the inside of the top shell to cut the muscle that holds the oyster shut. You've done it. Try not to lose too much of the water inside the shell. 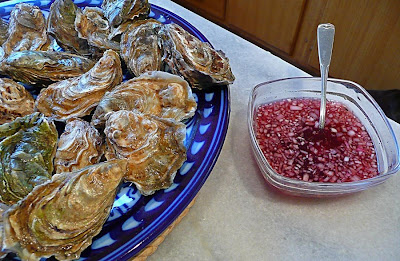 That's mignonnette — red wine vinegar with
diced shallots and pepper — in the little bowl.
What do you eat them with? Some people like lemon juice. I prefer vinegar, because that's what we ate with oysters in North Carolina. And vinegar is served with oysters in France too, in the form of what is called a sauce mignonnette. That's about half a cup of vinegar (we used red wine vinegar, but it's your choice) with a finely chopped shallot steeped in it for a few minutes. Grind in a good quantity of black pepper and stir. That's it. Spoon some vinegar sauce, or squeeze some lemon juice, on the oysters as you eat them. 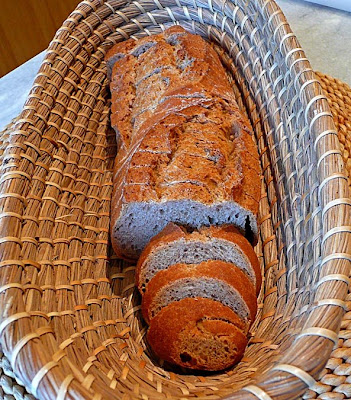 A loaf of good French rye bread, called pain de seigle
The other accompaniment is bread and butter. Rye or some other dark bread is especially good. You might be surprised to see what a French rye loaf — un pain de seigle — looks like. We got ours at the Chêne du Renard bakery up in the vineyard, and had it sliced there. I bought some beurre demi-sel to have with the oysters, rather than the sweet butter we normally use. 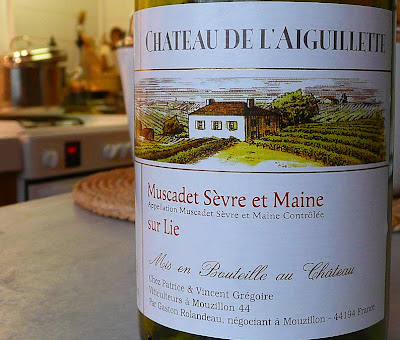 A bottle of Muscadet wine
from the Loire Atlantique département
And that's it, except for the wine. They say the best wine with oysters is Muscadet, which is made down at the mouth of the Loire River in what is the southeastern corner of Brittany. I bought a bottle of Muscadet at SuperU for the oysters.

But then I went to see Jean-Noël Guerrier to buy some of his red Côt (a.k.a. Malbec) wine and he gave me a bottle of his new 2008 Sauvignon Blanc as a gift. I admit it: I tried both the white wines with the oysters. I couldn't decide which one I liked better. Jean-Noël's was much more florid and fruity. The Muscadet was leaner and bone dry. Meanwhile, Walt had Champagne with his oysters, thanks to Jill Hertzmann, who bought him a bottle of Périer-Jouët when she was here in September. 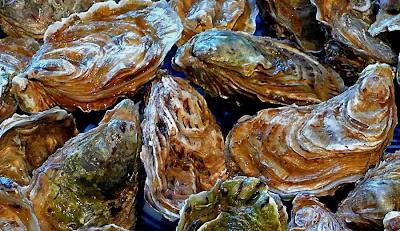 Oysters
That's oysters then. They were delicious. They came from Brittany, but we didn't find out what town or area they were from. They weren't really small, even though they were no. 4s. No. 3s would have been bigger than what we like.
Posted by Ken Broadhurst at 09:01