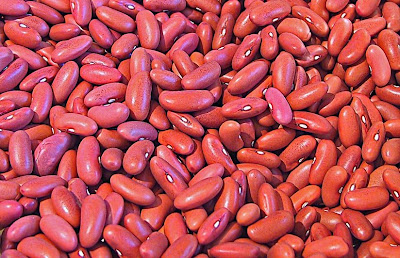 Haricots roses stand in for red beans
After all, Loulou used to live in New Orleans, so it wouldn't be surprising for her to be cooking Louisiana food. I never lived there, but I've been to Louisiana a few times in my life. Here is Loulou's post about Red Beans and Rice. 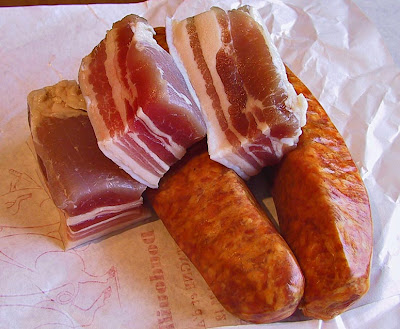 Brined pork belly and smoked Montbéliard sausages
from Chez Doudouille at the Saint-Aignan market
My inspiration for making beans, sausages, and rice was an e-mail that I had received a few days earlier from another blogger, Elise in California. I'm on her mailing list, and glad of it. She is the author of the Simply Recipes blog, which is a treasure of food ideas — as is Chez Loulou. Elise posted a Red Beans and Rice recipe on January 14, billing it as "a Southern classic." Maybe Loulou had seen it too. 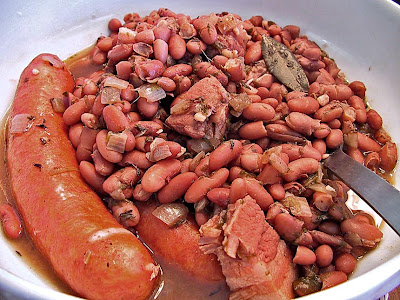 Pink beans, sausages, and pork belly
Another coincidence was that I had bought a kilogram of dried pink beans — haricots roses — on a shopping expedition in Blois a few days earlier. After getting Elise's mailing I consulted Paul Prudhomme's Louisiana Kitchen cookbook and The Joy of Cooking. I didn't have any Cajun spice mixes, but that wouldn't stop me, because in the kitchen cabinets we had plenty of the right kinds of spices and herbs — thyme, bay leaves, hot paprika, smoked paprika, and so on. I like to improvise in the kitchen, anyway. 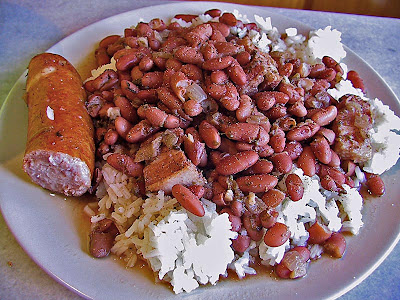 Pink beans and rice
My conclusion from looking at all these recipes was that Red Beans and Rice is just what we would have called "a pot of beans" when I was growing up. So I made a pot of beans with a few Louisiana-type spices thrown in for added flavor. And with some French ingredients.

Poitrine de porc demi-sel is better than
any salt pork I've ever eaten in the U.S.
The day before, I had gone to the outdoor market in Saint-Aignan to get some meat. Red Beans and Rice calls for smoked pork — hamhocks or pork shanks, for example — and smoked Andouille sausage, a Louisiana specialty. I couldn't get that kind of Andouille, but I could get good French smoked sausages in the form of saucisses de Montbéliard. That would provide plenty of smokiness, so I asked for a piece of brined pork, porc demi-sel, to go with them and the beans.

The Chez Doudouille charcuterie stand was the source of all the meats. There I not only get good pork products but good conversation when "Madame Doudouille" isn't too busy to have time to chat. We talked about her daughter's struggles with learning English at school, her upcoming trip to England, and her burning desire to travel to the States. 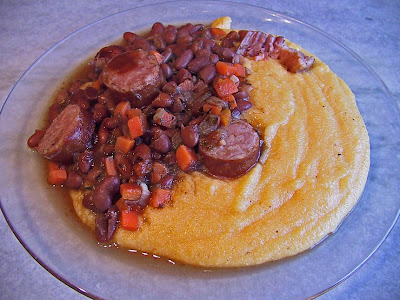 Leftovers: beans and sausages with some
cooked diced carrots added, and served
with polenta (yellow grits) cooked with cheese
So there it is. Red Beans and Rice inspired by one blog and cooked on the same day another blogger was making the same thing. It's a virtual world with so many more connections than ever in the past. But good cooking requires real products, and the quality of the foods I find here in France are one of the main reasons I live here. But I don't think I'd enjoy life nearly as much without the Internet and blogs, or without the variety of good foods available here.
Posted by Ken Broadhurst at 08:54