To make the puff pastry — la pâte feuilletée — for a Galette des Rois, or for croissants, here's what you do. Walt will correct any misconceptions about the process that might slip into my descriptions.

First take about ½ lb. of butter (250 g, or about two sticks) and roll it out with a rolling pin.

Meanwhile, make a dough with ½ cup of water (12 cl), ½ lb of flour (250 g), and a pinch of salt. Knead the dough until it comes together, wrap it is plastic wrap, and put it in the refrigerator to chill for 30 minutes. 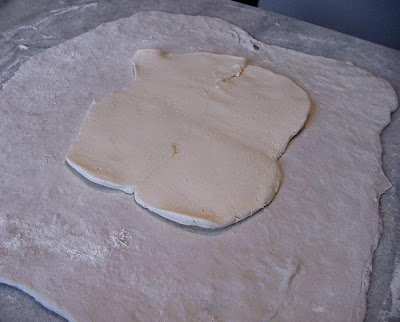 Put the softened butter between two sheets of plastic wrap and flatten and roll it out with a rolling pin into a rectangle about ¼ in. thick.

On a floured surface, roll out the chilled dough into a rectangle that is about twice as large as the rectangle of butter. Lay the butter on middle of the dough and fold the sides of the dough up over it. Roll that out slightly, re-wrap it, and put it back in the refrigerator for 30 minutes or more. 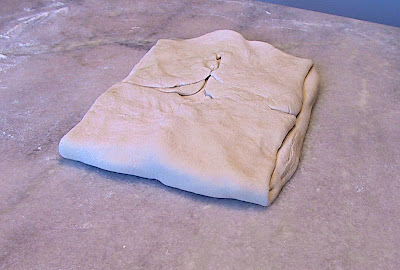 After 30 minutes, take the dough out, fold it on itself, and roll it out again. Re-wrap it and put it back in the refrigerator. Repeat that process 6 or 8 times. It takes several hours of folding and rolling and chilling.

Finall, take the chilled puff pastry dough out of the refrigerator and, for a Galette, cut it into two pieces. Roll out each piece so it's ¼ to ½ in. thick and cut out a round of dough using a dinner plate as a template. For croissants, cut the dough into triangles and roll them up. 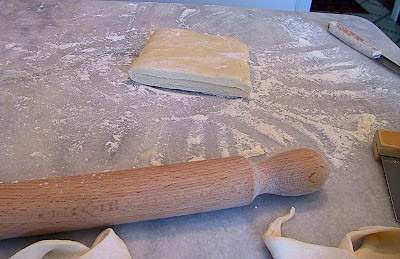 After folding, rolling, and re-chilling the pastry 6 or 8 times,
cut it in half and roll each half out flat.

The important thing is to keep the dough nice and chilled all the time and to roll it out on a well-floured, cold surface. 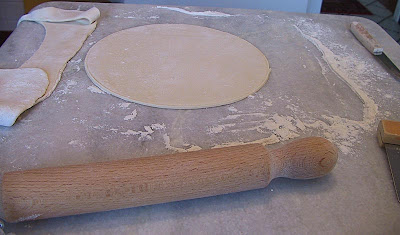 For a Galette, cut out two rounds of pastry.

Doesn't that sound easy? Well, not to me, because I've never had to try it (but I've watched). Certain people say it's pretty easy — it just takes patience. And the result is great.

If you can get French-style butter, it might be easier to work with. One brand is Plugrà, if I remember correctly. French butter has slightly more fat and slightly less water in it than American butter does, so it rolls out more easily, without being too brittle or crumbly. In some places you can buy butter imported from France.
Posted by Ken Broadhurst at 09:16