You've probably heard about the big windstorm that swept across southwestern France and northern Spain yesterday. Down there, a lot of trees were uprooted or broken off, power lines are down, and roofs have blown off. Up here in the Loire Valley, 400 to 500 km north of Bordeaux and Toulouse, we were spared. It rained most of the day yesterday, but there was little wind.

Jets fly over daily and on clear days we see them,
but we never hear them.
We've had 35 mm of rain over the past week. That's nearly an inch and a half, and the ground is soft and squishy. We had a few hours of strong winds a couple of days ago, and now the yard is covered with branches and twigs that blew out of the apple, linden, and birch trees. One day we'll be able to get back outside and clean all that up. For now, it's too muddy. 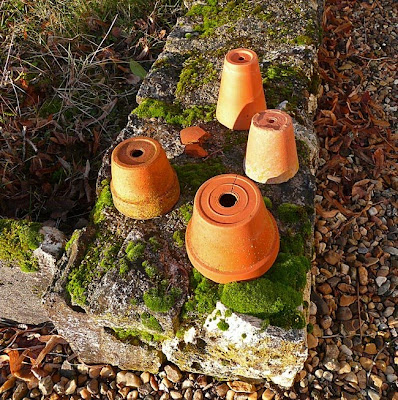 On a sunny winter afternoon, flowerpots
remind you of the coming of spring
But we are having some nice days and the weather isn't cold any more. It's all relative, I know. Our lows are in the mid-30s with highs in the upper 40s or low 50s. Between 2º and 12º on the Celsius scale, autrement dit. That's normal for winter here in Saint-Aignan. 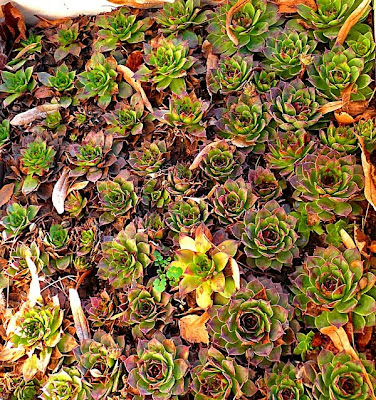 I thought my succulents would have frozen,
but they've survived. I'll soon start re-potting them.
It appears that the bitter cold we had in the first half of January didn't kill as many of our outdoor plants as I was afraid it would. Even plants in pots seem to have survived. I had moved the pots up close to the house on the south and west sides, and I guess that worked.

Now there are days when it positively seems like spring. This morning, for example, skies are clear and the sun is shining. But unless they have changed the forecast since yesterday, rain is supposed to start falling by afternoon. 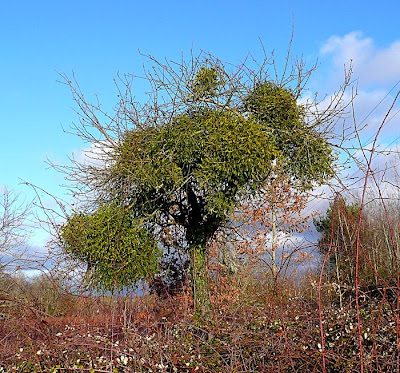 This is not a green tree. It is a nearly dead apple tree
out back that is being taken down by mistletoe.
The pictures in this post are ones that I took last Wednesday, January 21. You can see it was a nice day. Now, one month after Christmas, the sun comes up a little earlier (but still around 8:30 a.m.) and, best of all, it goes down later, around 6:00 p.m. So all in all, the atmosphere is significantly less gloomy than it was just a short time ago.
Posted by Ken Broadhurst at 08:37