Last night when I went to bed, I noticed an unusual white light behind the bedroom shutters. I could see it through the cracks and around the edges, and the whole window/shutter assembly was sort of glowing. 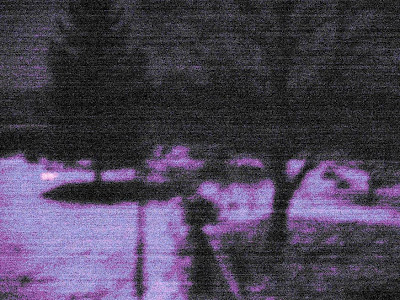 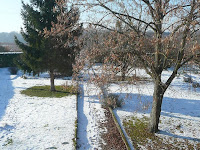 I got up and went into the bathroom to look out, because the shutter on that window wasn't closed. It was the moon. I knew it was nearly a full moon, because I had seen it in the late-afternoon sky when I went out for the walk with the dog. The light from the big white moon was intensified by reflecting off the snow we still have on the ground. You could see shadows from the trees, including the network of shadow cast by the bare branches of the big linden tree out there. 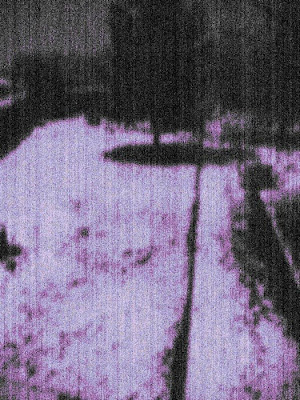 The snow is not getting much chance to melt. 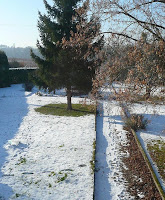 I thought that it was too bad I couldn't capture the moment with my camera. And then I thought, what the heck, it's worth a try. So I snapped half a dozen pictures and went back to bed.

Daytime equivalents of the two night shots are on the right here and above so you can see what it looks like. 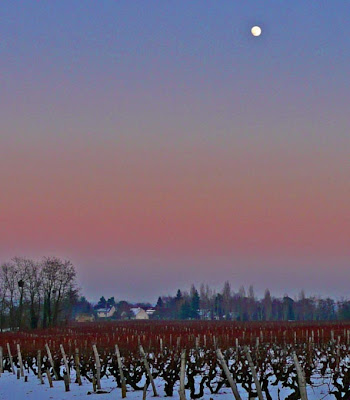 The moon over the vineyard late yesterday afternoon
This morning I looked at the pictures. They were just 6 black-filled rectangles on the computer screen. Thanks to the magic of photo editing software, however, I have been able to process them into recognizable patterns of light and dark. 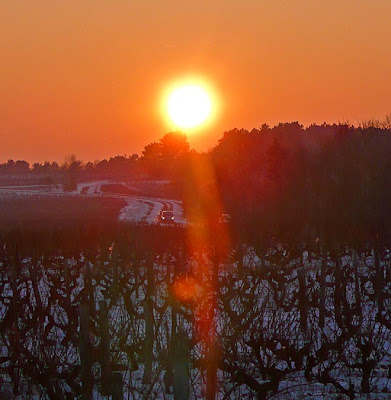 Sunset yesterday out where the gravel road
meets the paved route touristique
It is –8ºC again this morning. That's a little colder than yesterday morning — about +16ºF. Callie and I went out for our walk as usual. It's about two miles out to the end of the gravel road and back, through the frozen vineyard. 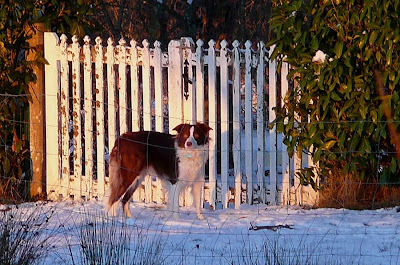 At the end of the walk, Callie waits patiently by the
back gateto be let back in. She walks faster than I do.
At one point Callie's feet slipped out from under her and I thought she was going to end up sprawled across the road. But she was able to right herself and seemed embarrassed when I laughed at her near pratfall.

* * * *
By the way, on the subject of spices and herbs in broths, soups (like turkey-barley), and stews, and how you might fish them out at the end of the cooking, here's a picture of four tea balls that we have. The smaller ones work for a pot of tea, and the bigger ones we use as spice balls, if that's a term. They solve the "fishing" problem. 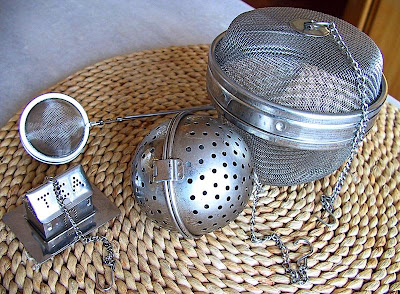 The big mesh ball is good for keeping garlic cloves, chopped onions or carrots or celery, bay leaves, other herbs, hot red peppers, and spices like allspice berries and peppercorns from floating around free in a soup or stew. The medium-size round one in the middle is the one I use most often, though. Notice the chains and hooks you can use to hang them off the side of the pot for easy retrieval.
Posted by Ken Broadhurst at 09:12