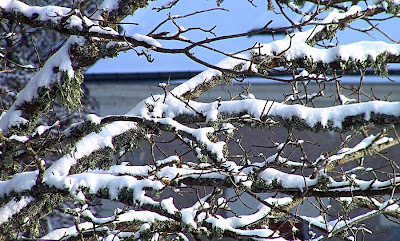 Scenes from yesterday afternoon, when the sun came out

This is the coldest morning we've had since we moved to Saint-Aignan in 2003. The next coldest was two or three winters ago when the temperature went down to minus 8ºC (+18ºF). If that doesn't seem very cold compared to where you are, remember that houses here are not built to withstand such temperatures. This is a pretty rare occurrence in Saint-Aignan. Our house has very little insulation except the air spaces inside the brick and concrete blocks it is built out of. 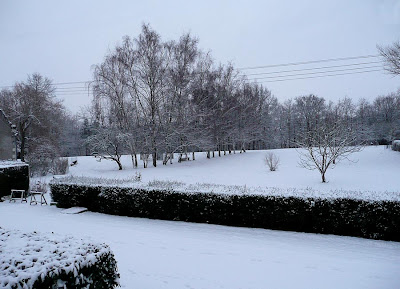 The neighbors' property across the road from our house

So far we haven't had any frozen pipes — and that makes me think I might do well to go check the downstairs shower, which is in an unheated room and has pipes running right up against a cold exterior wall. And so far our heat is working fine. We usually just turn on the boiler and heat up the radiators in the morning from about 7:00 until noon or a little later. Then we turn it all off and when it starts to feel chilly in the house we build a wood fire.

Today I think the radiators might just have to stay on all day. I just checked the temperature in our little "sun porch," where I put vulnerable outdoor plants to spend the winter. The temperature there is down to +2.4ºC (36ºF). It's the first time I've ever seen it colder than 6ºC (42ºF) out there. 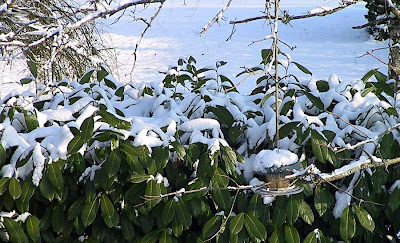 We're trying to keep food out for the poor birds.

I hope those plants survive. I'm afraid many of the plants I left outside for the winter, thinking we would have another mild one like the last two, will be lost. Some are in pots and I didn't have room for them inside. Others, like the artichokes and collard greens, are in the ground. We hope our wisteria won't freeze, or the cala lillies. Or the thyme and rosemary bushes. And so on. We'll see. 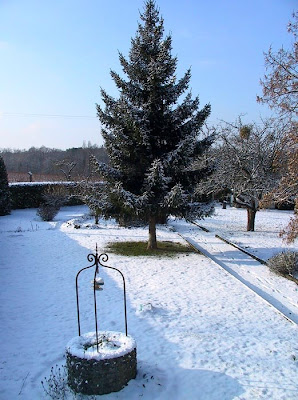 The frigid back yard

Our outdoor thermometer is in a protected spot on the north side of the house and it reads a little warmer than what the official MétéoFrance temperatures show. According to MétéoFrance, it is minus 12ºC in Tours this morning. Romorantin, on the other side of Saint-Aignan, is usually colder than Tours, but I haven't seen reports about it. 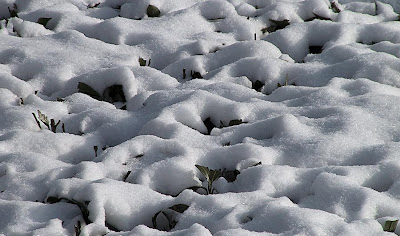 This is the top of the hedge.
We'll have more turkey-barley soup for lunch today, I'm sure. I'm glad I made it, because it's very warming. I'll post about what goes into it in a day or two. We both thought it turned out to be very good.