Ever been to New Bern?

Yesterday I bought my ticket for a February trip to the U.S. to visit my mother, sister, and other family members. I didn't go back to the U.S. at all in 2008. I'm looking forward to being there, but not so much to the getting there. I've never really enjoyed flying, though I've flown across the Atlantic Ocean 65 or more times in my life. 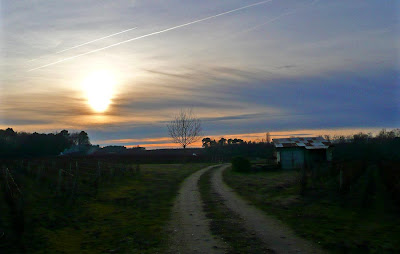 Late yesterday afternoon in the vineyard
The trip from Saint-Aignan to New Bern, North Carolina, is very long and pretty complicated. First I have to take the train to Paris. Because I need to be at the airport between 10:00 and 11:00 a.m. on the day of my departure, I'll have to go to Paris the day before and spend the night in a hotel. I've got that all arranged. 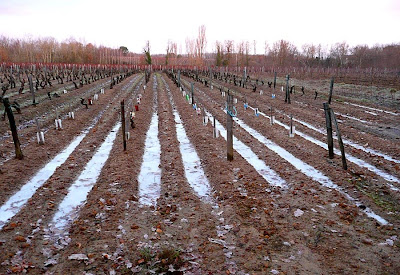 Ice down the rows in the vineyard this morning
I'll take the train to Paris from the little town of Onzain, on the Loire River between Amboise and Blois. Walt will drive me up to Onzain, which is just across the river from the château at Chaumont- sur-Loire. It takes about 40 minutes to get there by car. Then it's a two-hour train ride. The train will put me out at the Gare d'Austerlitz in Paris. Arriving in Paris is always a thrill, even if it's only for a 24-hour stay. 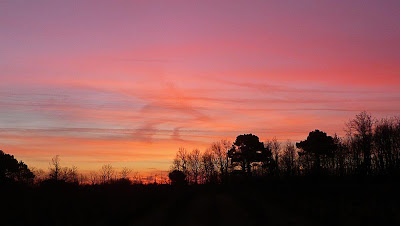 This morning's sunrise, no. 1...
My hotel is in the Latin Quarter. It's only three metro stops from the Gare d'Austerlitz. I decided to stay in Paris this time rather than in a chain hotel out at Charles de Gaulle airport. I'll be able to spend the afternoon — if the weather cooperates — wandering around the Paris neighborhoods where I used to live and work, taking pictures and enjoying being "back on the street again." 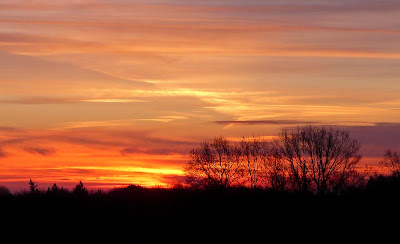 ...and no. 2. Thanks to Callie,
I'm up and out there early enough to see these.
If you take into account that I'll have to leave Saint-Aignan the day before, that makes it a 48-hour trip all told. That kind of sustained activity is hard on an old person's body. Not to mention the stress of all those connections, take-offs, and landings.

I'll be glad to get there and enjoy being back in my home town for a couple of weeks. I imagine I'll eat a lot of seafood. I'll shop 'til I drop. I'll see a lot of relatives and friends. It'll be a good time. 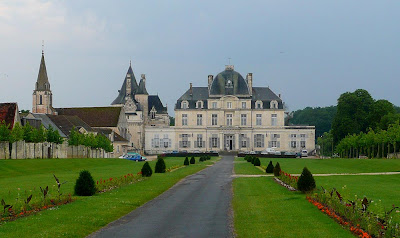 I'm publishing this picture I took last June
at the château in Verneuil-sur-Indre, near Loches,
for Simon and CHM. See Susan and Simon's blog for context.
Posted by Ken Broadhurst at 09:13