Yesterday the morning was cloudy and even a little foggy, but a brisk wind was blowing all the clouds away by the time I went out with the dog for the morning walk. 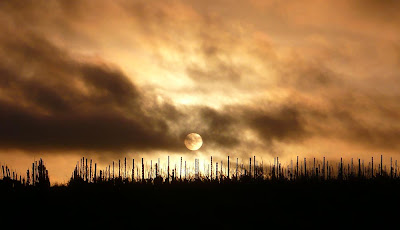 Sunrise over the vineyard on 20 January 2008
It turns out that that was very nice weather, though chilly. Compared to today, that is — a light misty rain is now falling, and the temperature is barely above freezing. It looks like we'll have a gray day today.

Like many Americans, we spent a good part of the day watching the Inauguration ceremonies and events on TV. We get CNN International on our satellite system, and the news network's international service gave us a live feed from the U.S. all day long. Usually, the programming is European, without a lot of U.S. news.

So my morning walk was the only time I stuck my nose outdoors. Walt did the afternoon walk, and he went out early so that he would be back in time to watch and hear President Obama's inaugural address. With the six-hour time difference, we saw the speech just after 6:00 p.m. in France.

Don't think that the photo of that spectacular sunrise means we had a dreary day. Far from it. 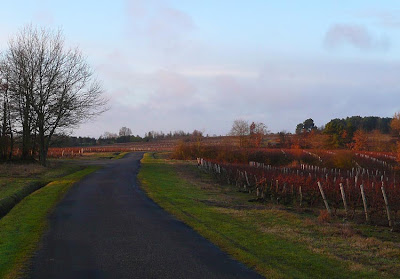 The tourist road and vineyards at sunrise
After I took the picture looking toward the sun, I turned 90º to the right and snapped the shot just above. As I said, the clouds had almost entirely blown away, and a beautiful day was dawning.
Posted by Ken Broadhurst at 08:34