Last Monday, we ordered a Galette des Rois from Sylvie la boulangère, who does our daily bread deliveries now. This galette is a special cake that people in this part and many other parts of France eat traditionally in January to celebrate the Catholic holiday called the Epiphany (The 12th Day of Christmas, a.k.a. Old Christmas). 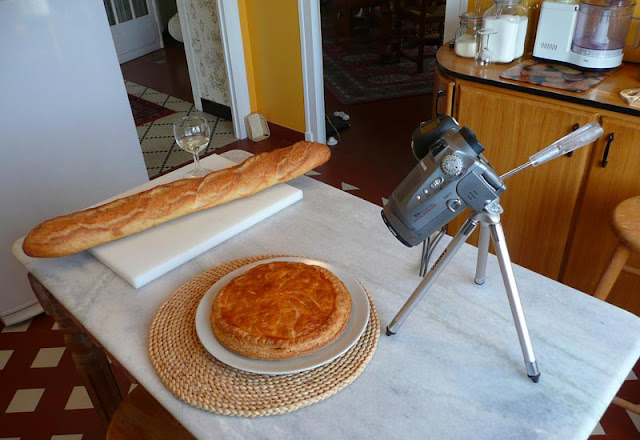 Here's how I take pictures in the kitchen these days, using my big
old Canon digital camera on a tripod. The cake is Walt's galette des rois.
When Sylvie came by Tuesday morning (despite the snow) she brought us the cake, which is a puff pastry shell filled with almond cream (crème d'amandes, a.k.a. frangipane). There is a little ceramic token baked into the cake, and part of the fun of eating these galettes is seeing who gets the prize and becomes king for the day. 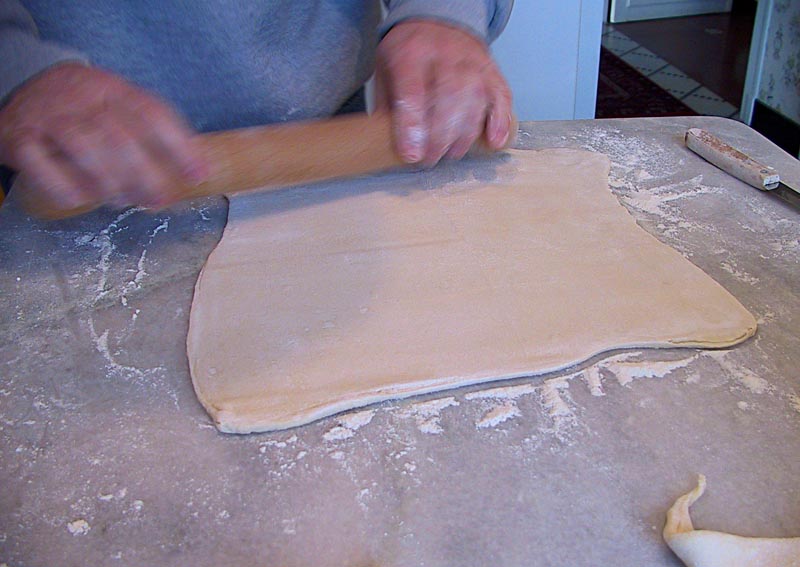 Walt rolling out the puff pastry dough he made.
Walt went out to the gate to get the bread and cake from Sylvie last Tuesday morning, and when he came back it he said wow, she charged 10 euros for the galette. That's 13 or 14 dollars. Now I know it's freshly made AND delivered, but still. At SuperU, you can buy the same cake for €3.50 (though I'm sure it's not as good). And in past years, it seems to me the going rate for a fresh, made-in-the-shop Galette des Rois ("Cake of the Kings") in bakeries has been between 4 and 6 euros. 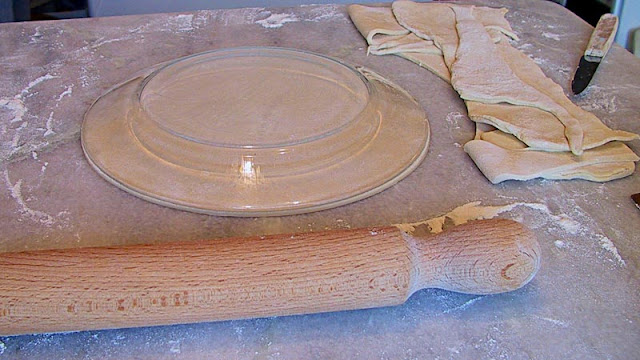 Use a plate to cut out two rounds of puff pastry.
On of the nice boulangeries in Saint-Aignan had a special program last year where they gave you a "fidelity" card when you bought your first Galette and then stamped it each time you bought another one. After you bought four, you got the fifth one free (and you didn't have to take it right then; you could go back for it another day). We ate five Galettes des Rois over the course of the month of January that year, for sure. 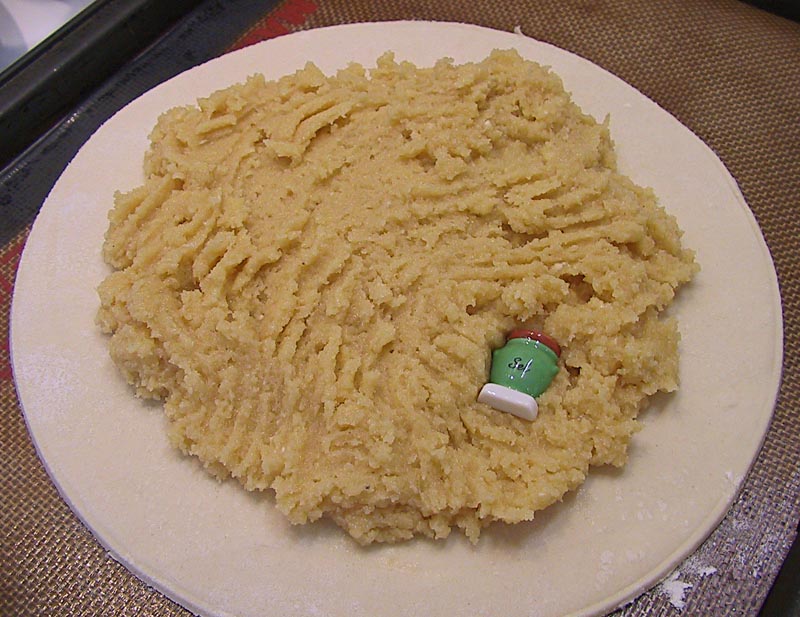 Spread the almond cream filling onto the bottom round
of pastry, and insert a prize token if you want.
Well, we've had icy roads all week and no real incentive to take the car out of the garage (except my grocery store run on Thursday). It would be interesting to go to some other bakeries and see what kinds of prices they are charging for a Galette des Rois this year. But we haven't done that — yet. I know the price of flour has gone up. 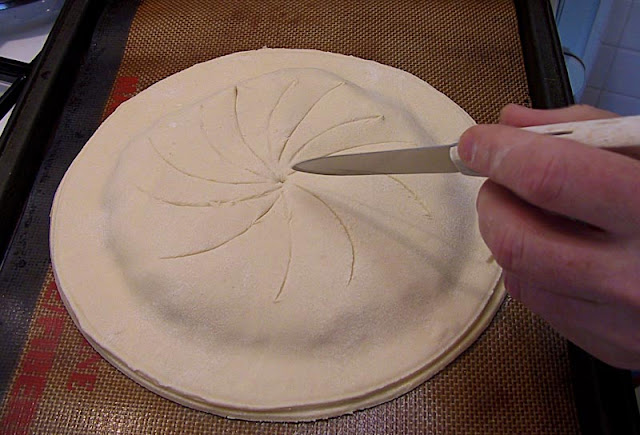 Make cuts in decorative patterns in the top of the galette.
Meanwhile, Walt said he wouldn't mind trying to make his own Galette des Rois. We looked up recipes on the Internet and found one that looked good. We had all the ingredients in the kitchen: butter, flour, salt, almond powder, milk, eggs, etc. So Walt got busy Friday afternoon. 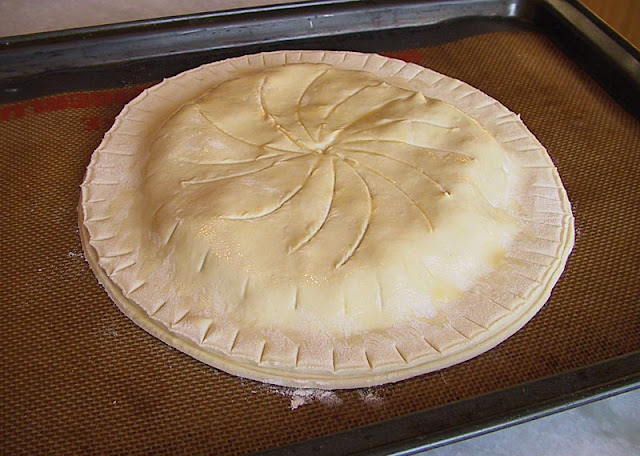 Paint the top with beaten egg for nice browning in the oven.
The ingredients in the recipe included this one: 600 grams of puff pastry dough. You can buy that kind of dough in packages at the supermarket or, better still, from a local baker's shop. But we weren't going out, so Walt decided to make it himself. I'm not going to describe that process for the time being. It's really the hardest and longest part of the recipe. But you can buy puff pastry dough ready-made. The other component of the Galette is almond cream, a simple mixture of almond powder (ground almonds), sugar, butter, eggs, and vanilla or almond flavoring. 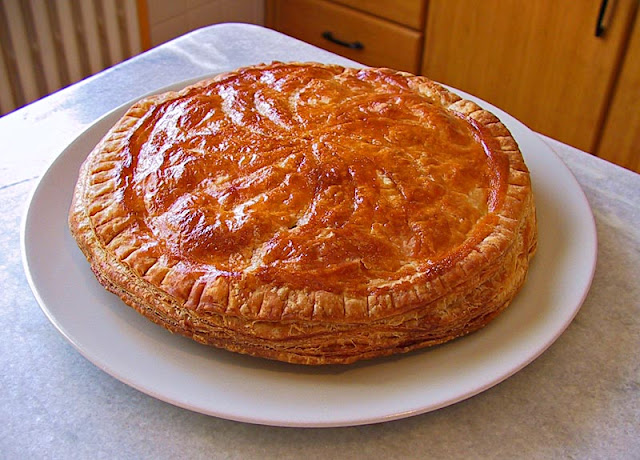 Et voilà, la Galette des Rois, faite maison —
a home-made Cake of the Kings.
Then it's just a matter of rolling out the puff pastry dough and cutting two rounds out of it. You put the frangipane on the bottom round, paint some beaten egg around the edges, and lay the second round over the top. The beaten egg seals the two together. Cut some decorative slits on top and around the edges of the cake, and then paint the top with more beaten egg so that it will brown nicely. 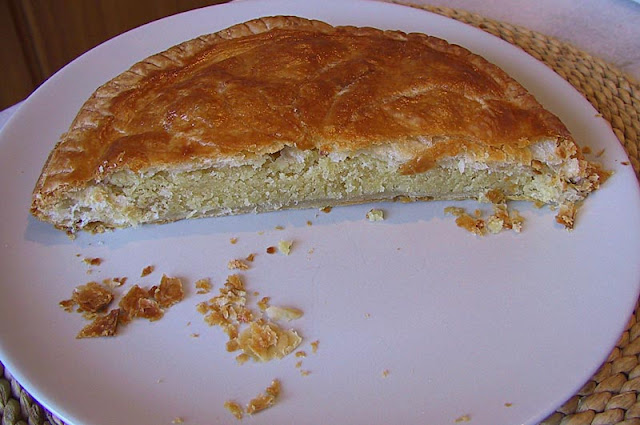 And here's what was left over. Nobody got the prize
yesterday (so I guess I'm still King!)
Put the cake, which you make right on a baking sheet, into a 400ºF/200ºC oven for 30 to 45 minutes, until it is golden brown. Let it cool slightly before you cut it. Don't break a tooth on the ceramic token!

Here's a link to the recipe in French, and here's my adaptation in English:

For sealing and browning the cake:
1 beaten egg (or 1 egg yolk beaten with 1 Tbs. milk)

Make the filling by creaming together the ground almonds, sugar, and softened butter. Mix in the eggs one by one, and then mix in the vanilla or almond flavoring.

Roll out the pastry and cut two 10-inch rounds out of it. (Save the extra pastry in the refrigerator or freezer for other recipes.)

Place the bottom round on a baking sheet and spread the filling on it, leaving an inch or so of uncovered pastry around the edge so the two rounds can seal togther. Put a ceramic token in the filling if you want. Brush beaten egg on the pastry around the filling and lay the top round over all, stretching it a little to fit and pressing down lightly on the edges for a good seal.

With a knife, cut decorative patterns into the top of the cake and around the edge if you want.

Paint the top of the cake with beaten egg so it will brown nicely. Put the cake into a hot oven (400ºF or 200ºC) for 30 to 45 minutes. Reduce the temperature as it cooks if necessary to keep it from burning.

Serve the Galette warm — reheat it in a low oven before serving if you make it in advance. That's what people in France do with the Galettes they buy from bakeries or supermarkets.

Fact is, this cake is also known in France as a Pithiviers and is a specialty of the town by that name, which is north of Orléans and not very far south of Paris. Here's a link to a Gâteau de Pithiviers recipe in French.

We figure the ingredients for our home-made Galette cost us about two euros. Here's a link to a photo on Walt's blog to show you the second Galette he made in January.
Posted by Ken Broadhurst at 08:44