We drove up to Blois yesterday to look for new hiking boots and to stop in and buy supplies at the Paris Store up there. 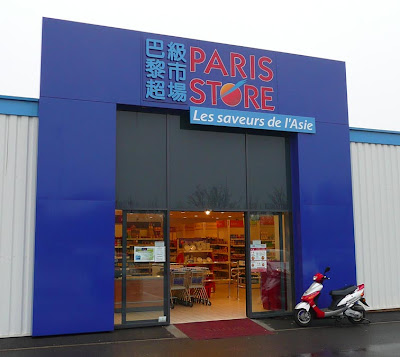 The Paris Store in Blois (with the employee's scooter)
Maybe with new boots I will be more nimble on my feet out in the vineyard. We were both successful. We first went to a Décathlon store out on the north side of Blois, but the merchandise there had really been picked over. They didn't have anything we liked in our sizes. 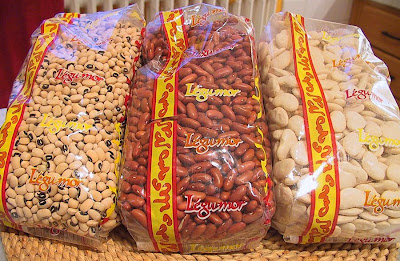 Dried beans from the Paris Store
Then we stopped in a the Paris Store, which is just off the Ave. de Châteaudun right next door to an establishment called American Car Wash. I hope Paris Store makes a go of it. It's a great place to find Asian food products of all kinds, from fresh vegetables to dried noodles and rice, canned goods, and a lot of frozen food. They stock foods you don't find anywhere else out here in the provinces. 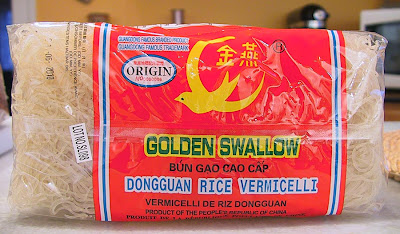 Rice vermicelli for nems
For example, we bought 2 more kilos of those big lima beans, a kilo of black-eyed peas, and a kilo of haricots roses — pink beans. We bought two or three kinds of rice- and wheat-flour noodles. One of our upcoming projects is to make a big batch of nems — Vietnamese-style egg rolls or spring rolls — to put in the freezer. For those you need rice vermicelli, along with carrots, onions, dried mushrooms, and meat. We plan to use pork, duck, and shrimp. 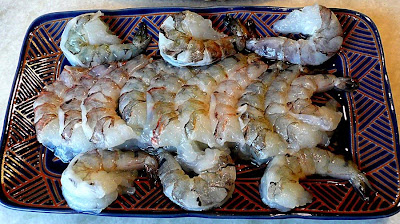 Raw shrimp peeled and de-veined
So we bought two big packages of frozen shrimp. We had taken a cooler and a couple of ice packs with us. By the way, I made Loulou's corn chowder recipe again and added shrimp to it this time. I just dropped them into the cooked soup and let them simmer for three or four minutes until they turned red. Delicious. It is really nice to get these shrimp — raw, headed, and frozen — from the Asian market. 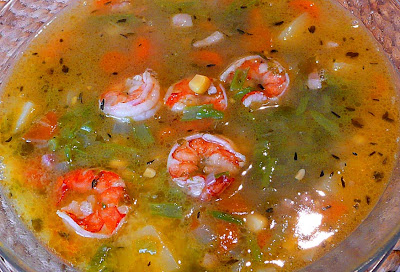 Corn chowder with shrimp
I think I'm turning into a food hoarder. You should see the stockpile we have in the cellar — not to mention the freezer.

We were successful in finding boots at another store in south Blois called Go Sport. And they were on sale — mine were 40% off and I'm optimistic that now I'll have drier feet and an improved footing.
Posted by Ken Broadhurst at 08:11