I just did a search on the word "mushroom" to see if I had ever posted a topic about nearby mushroom caves. I was surprised to see that I hadn't. I don't know if you ever use the search feature on the blogs you read, but it is pretty handy. Just time the word or expression you want to look for in the search field at the top left of the Blogger screen, and you can see all the topics where that term appears. 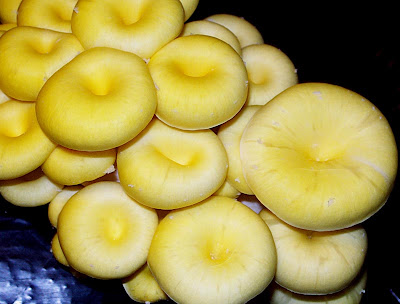 Mushrooms growing in the caves at Bourré
The other thing that surprised me is how many topics I've written and posted that contain the word "mushroom." I found posts about wild ones and cultivated ones. I use mushrooms a lot in cooking, I realized. We put them in quiches and omelets, on pizzas, and in all kinds of stews. Many of the French classics from bœuf bourguignon to coq au vin and blanquette de veau wouldn't be authentic without mushrooms. 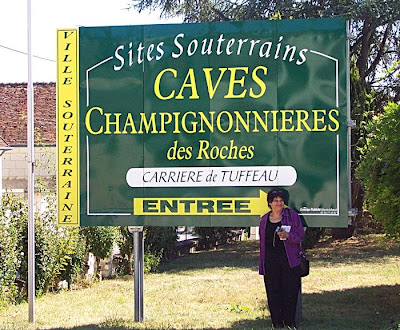 That's our friend Cheryl in front of the billboard in 2003.
Anyway, I started blogging in October 2005, and we had already lived here for 2½ years by then. We first visited the mushroom caves in the nearby village of Bourré back in September 2003, when he first arrived in Saint-Aignan. I'm finally posting some pictures I took that day. I think we went back to the mushroom caves in 2004, but I haven't found those pictures yet. 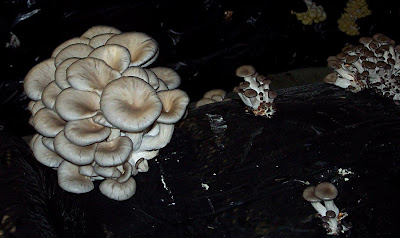 Bourré is a village on the Cher River where there are big limestone cliffs along the riverbanks. It's next door to Montrichard and about 12 km from Saint-Aignan. A lot of the stone used in the contruction of the Loire Valley châteaux was quarried there. Bourré limestone is reputed to be the whitest and purest in the region. As a result, there are literally a couple of hundred kilometers of caves, or tunnels, called galeries in French, carved into the cliffs and hillsides at Bourré. 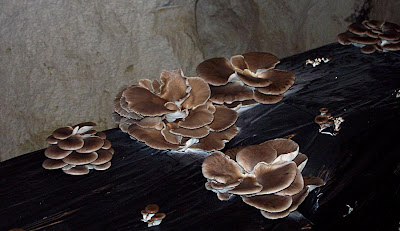 One good use for such caves in growing mushrooms, because the temperature and humidity in the tunnels stays constant year-round. The temperature is about 14ºC — that's in the mid-50s F. It's cold and dark in there — at least it feels cold in summertime when it's 25 or 30 degrees warmer outside. 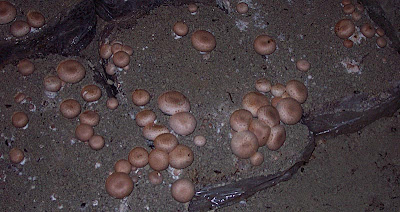 As I've said, growing mushrooms here in the Loire and Cher river valleys is not a big business the way it used to be, but some are still grown for the local market at least. You see signs for mushroom caves here and there, and often you can stop in and buy fresh mushrooms. 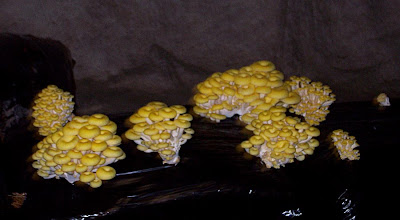 At Bourré, site of Les Caves Champignonnières des Roches, you often see a tour bus or two parked out front. It's a tourist attraction on the Loire Valley circuit now. There's a guided tour that takes an hour or two, and there's a shop selling fresh mushrooms of several varieties, as well as mushrooms and mushroom soups in jars and tins. There's even an "underground village" carved into the cave walls, but I've never seen that part. 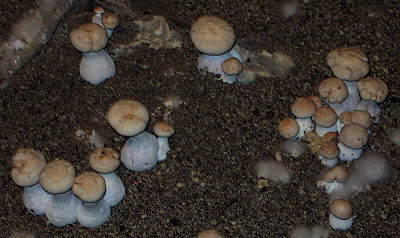 As a growing medium for the champignons, the guide told us, they use sterilized horse manure packed in black plastic sacks. They punch holes in the sacks and introduce spores for the kind of mushroom they want to grow. I remember there were oyster mushrooms, shitakes, something called le pied bleu or blewit, and of course button mushrooms. It was much cleaner in there than you might think it would be. 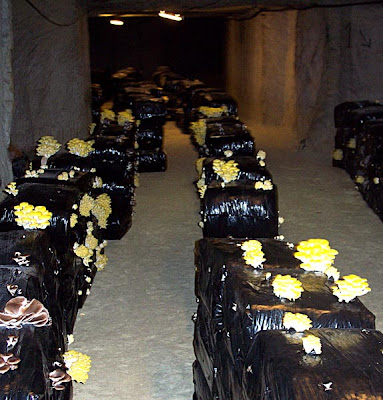 This gives you an idea what it is like in the mushroom caves.
It's not easy to take pictures in dark caves, but I tried. You can judge the results for yourself. Some of the mushrooms were beautiful.
Posted by Ken Broadhurst at 09:05