Saint-Aignan and the whole Loire Valley are again under the moderating influence of a maritime flow. Gone is the cold continental or Scandinavian air mass — a high pressure system — that dominated the first part of the month and brought us snow and ice. 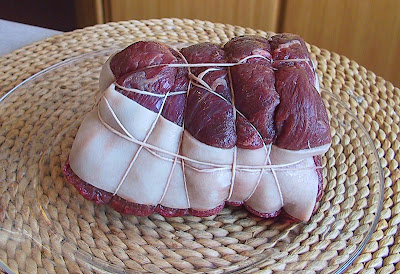 This is called un rosbif. It weighs about a pound. Cook it
for 15 minutes in a very hot oven and then let it rest,
covered, for 15 minutes — if you like it rare.
Now things are back to what I consider "normal" winter weather in Saint-Aignan: clouds, breezes, and rain, with temperatures in the 40s and 50s Fahrenheit — 5 to 15 degrees Celsius. This morning's low is just above 5.4ºC, which is about 42ºF. It is supposed to rain today. 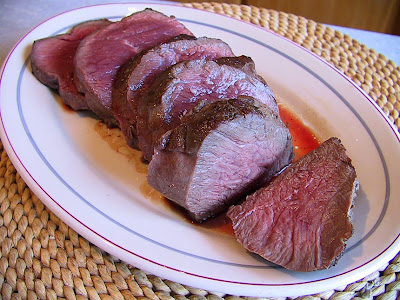 Un rôti de bœuf — very typical French food
It's market day in Saint-Aignan and I have some errands to run. It will be fun to be out with the crowds. Everything is relative, and when I say crowds you shouldn't think of masses or mobs. Finding a parking space is not a problem, and you don't feel pushed and shoved as you walk through the outdoor market. You might have to stand in a line at the seafood or cheese merchant's stand, though. Or Chez Doudouille, the pork butcher's. 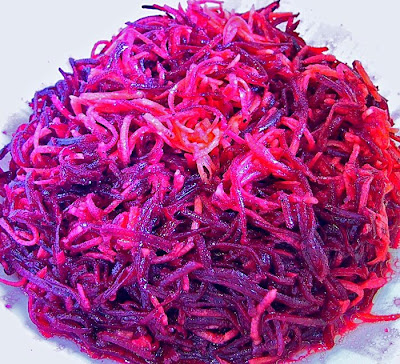 Grated raw beet and carrot as a mixed salad
Yesterday was a meat and potatoes day. We had a nice rosbif, all tied up in twine by the butcher and ready for the oven. And French-fried potatoes. I also finally got around to grating up that raw beetroot I bought on New Year's Eve — in fact, Walt did it in the food processor. The beet had waited patiently in the refrigerator and was none the worse for it. I ended up cooking the other two red beets I bought. 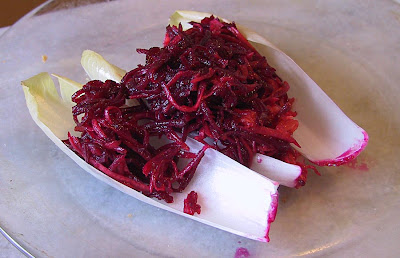 Carotte et betterave râpées, sur des feuilles d'endive
This one didn't look like it would be quite enough for a big salad, so we added two carrots. We grated them up in the food processor to, and then seasoned them with red wine vinegar, vegetable oil, salt, and pepper. That's all. It made a good salad, with a few leaves of Belgian endive. In America, where beets are sold raw, this is a good, quick way to prepare them. 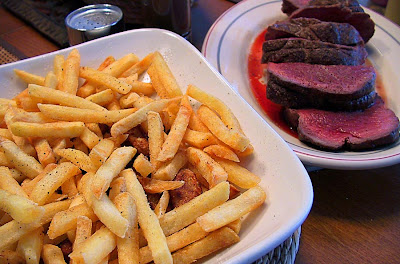 Rosbif-frites
There's a protest in the village today. Or a show of support, I guess you would call it. The French postal service wants to close down the village post office, and some people are unhappy about it. The mayor, our neighbor, has called for people to turn out at 11:00 this morning to demonstrate their support for keeping the office open. Already it operates on reduced hours compared to five years ago, when we first arrived here.

P.S. Noontime. An icy rain or sleet started falling at about 10:45 so I didn't go to the manifestation. I wonder if others did.
Posted by Ken Broadhurst at 08:56