I keep coming back to childhood foods. When I was growing up, we ate a lot of beans. Pinto beans, black-eyed peas, great northerns, and navy beans. And one kind I've seldom found or eaten over the past 40 years since I left home: big lima beans. And I really like to apply French cooking methods to food products you don't normally find in France.

A few weeks ago in Blois we went shopping again at the Paris Store, which is an Asian grocery chain. There I came upon a bag of giant white lima beans. Dried, of course. In French they are called pois du Cap, which I think means "Capetown peas." 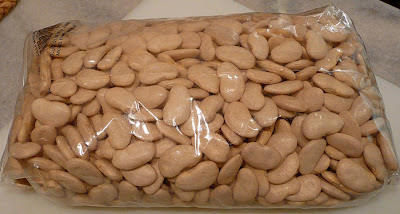 This is a kilo bag — that's 2.2 lbs. — of big lima beans.
They were grown on the island of Madagascar.
Even the Larousse Gastronomique food encyclopedia knows that pois du Cap didn't originate in South Africa — even though a lot are grown on the nearby island of Madagascar, it seems, and in other African countries. When you look up pois du Cap in the Larousse, the book refers you to the article on beans — haricots — where you find a short section devoted to haricots de Lima — lima beans.

I'm sure I'd never found giant limas in France before seeing them in the store in Blois the other day. The are beans that originated in South and Central America and were associated with Peru and its capital city, Lima. Hence the name. 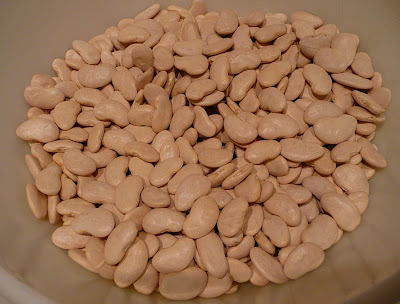 It's hard to tell how big the lima beans are, but
take my word for it. They're big.
I read around about dried limas on the Web and in some cookbooks. I learned that you should soak them in cold water for 12 hours, meaning overnight. That's what I did. I put them in a big bowl and covered them with water. When I got up the next morning, it looked as if the beans were trying to climb out of the bowl. They had soaked up nearly all the liquid. 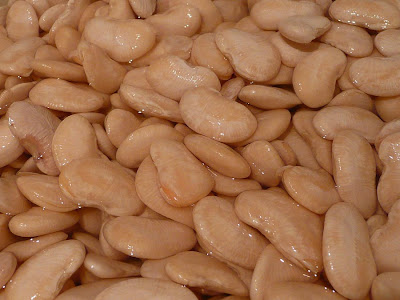 Here they are after a 12-hour soak in cold water.
Big limas and what we call "baby lima beans" in most of the U.S., or sometimes "butterbeans" in the South, are two different species, apparently. The smaller limas are canned or frozen while they are still fresh and green. The big limas are white after drying. I've never seen "baby" limas in France. I put that in quotes because they are no more "baby" beans than those little ground-down carrots in the supermarkets are "baby" carrots.

I read one piece of advice from somebody who loves beans — I think it was on Chowhound — but you'd have to love them to be so meticulous. The person said you can slip the skin off each lima bean after you've soaked the beans in water for several hours. Then when you cook and eat the skinless beans, you won't suffer quite as much from their well-known digestive side effects. 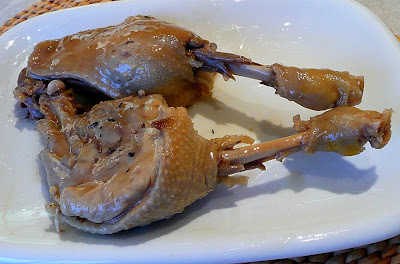 Confit de canard
With my lima beans, I decided to make something cassoulet-like, as I've done in the past using black-eyed peas. Since I have some duck leg-thigh pieces that I slow-cooked in duck fat a few weeks ago, that was it. Such duck is called confit de canard in France. I also had some Toulouse sausages in the freezer.

Toulouse sausages are plain pork sausages whose claim to fame is that the filling is not run through a meat grinder but finely chopped by human hands wielding a sharp knife. I'm sure that a lot of the saucisses de Toulouse sold in France today are fakes nowadays, at least from that strict point of view. But they are nonetheless delicious. 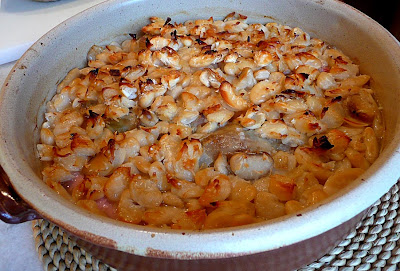 The beans browned and ready to serve
First, cook the soaked and rehydrated beans for a couple of hours at a low simmer, with aromatics like a whole, peeled onion, a couple of cloves of garlic, a few bay leaves, some allspice berries, and some black peppercorns. A couple of carrots and maybe a stalk or two of celery would be good too. In a separate pot, poach some Toulouse sausages for 15 or 20 minutes.

Lay the pieces confit de canard and saucisses de Toulouse in the bottom of a big baking dish. Salt the beans after their long slow cooking — salting them too early tends to toughen the skins, they say. Then spoon a good quantity of the cooked beans over the meats, with some of the cooking liquid. 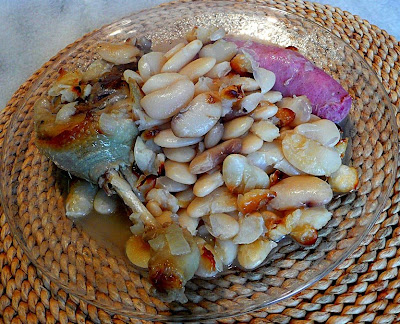 Cassoulet de haricots de Lima
Put the pan in a hot oven with a cover on it for 30 minutes, then uncover it and let the top brown a little. Some of the liquid will evaporate too, making the beans and meats less soupy.

Speaking of soup, I have enough lima beans left to make a big pot of soup with celery, carrots, onions, a chopped up sausage, and some smoked pork lardoons. That's for tomorrow.
Posted by Ken Broadhurst at 08:13