End of the ice age

Callie woke me up at 5:30 this morning. She didn't mean to. She came into the bedroom and lay down. But her stomach was gurgling and growling so loudly that I couldn't get back to sleep once I heard it. I wonder what nasty thing she ate on her vineyard walk yesterday afternoon. 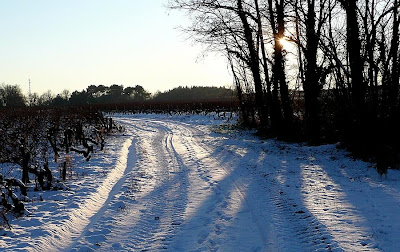 The road into the vineyard a few days ago
After a few minutes I decided to get up and let the dog outside for a while. Maybe that's what she needs, I thought. When I went downstairs and opened the back door, I was surprised to see that all the snow was gone. I stepped outside in my shirtsleeves and it didn't seem very cold. I checked the thermometer and saw that the temperature was above freezing, even at 6:00 a.m.

Part of me says, well, that icy weather was fun while it lasted. 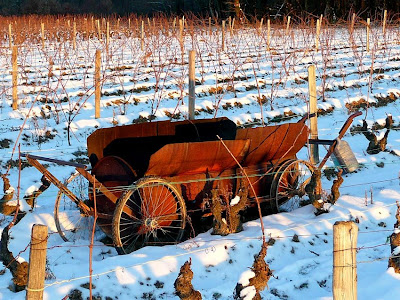 A home-made wagon used for burning vine clippings
Now I have to get the car out and do some errands. It's time, and I no longer have snow and ice on the roadways as an excused to stay holed up. Things will get back to normal. So here are a few parting shots of our snowy days. Of course we don't know if it will happen again this winter.

About Sylvie, la boulangère, a few days ago I said that because of icy pavement she apparently hadn't been about to make her daily rounds last Friday. We were here in the house and we never heard her toot her horn to alert us that she had arrived with the bread. But we were busy with our annual plumbing emergency. 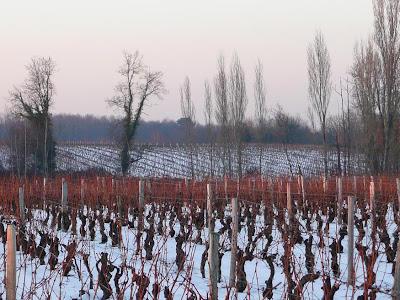 The Renaudière vineyards in their January disguise
Saturday morning Sylvie did stop at the usual time. I was just getting back from my walk in the vineyard with Callie. Walt came out of the front door with the money for bread. We both talked to Sylvie, in other words. And she assured up that yes, she had come by at the usual time Friday morning. She said she honked the horn a time or two and when we didn't come out of the front door, she drove on off. She figured we had gone grocery shopping so some such. 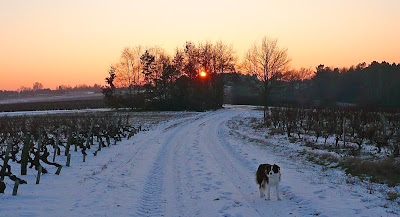 Callie out at the end of the snowy gravel road
Being semi-housebound makes you start thinking about traveling. When we moved here, we thought we would travel a lot more than we have turned out to do. Before moving to France, Paris and other parts of France were about the only places we ever chose as a travel destination. Now that we are here, why would we want to go anywhere else? 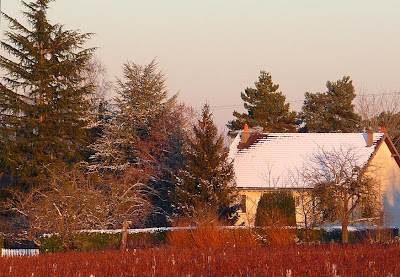 Our house and yard on a cold sunny day in January
Because we're getting cabin fever, that's why. Where would we go if we decided to go? Probably England, Scotland, and Wales. It would be fun to rent a camping car, some kind of recreational vehicle, and drive around from village to village, campground to campground, for 3 or 4 weeks, talking to people and eating pub grub. With the dog of course. Maybe we'll do that some day — when the weather is decent, when there's no garden to put in or tend or harvest, when the dollar gains strength... when pigs fly.

Oh, I almost forgot to mention: it's supposed to rain today in Saint-Aignan.
Posted by Ken Broadhurst at 06:30