Southwestern France was really devastated by the storm this weekend. More than a million households were without electricity until yesterday, and more than 500,000 still are today. It will take the rest of the week to get all the current turned back on.

Eight people were killed in storm-related accidents, many because of falling trees. Rooftops and roof tiles were torn off.

Three-fourths of the pine forest, France's largest, in the region called Les Landes has been destroyed. The last storm of this intensity hit at Christmas in 1999. Back then, people say, the ground was dry but trees were just broken off above ground level by hurricane-force winds. This time, the ground was saturated with water and the trees were mostly uprooted.

Trees fell on 1500 km, 1000 miles, of rail lines across the southwestern region, blocking the tracks and pulling down the power lines used to run electrified locomotives. It will take a while to repair all that.

So that's the 7:30 news. I'm translating what I just heard on France 2 TV's Télématin newscast. 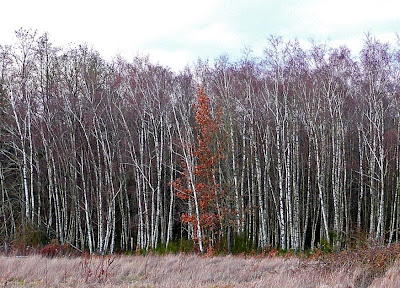 Aspen trees, called trembles in French, line the ravine
formed by a stream near our house that runs down to the Cher River.
Here in Saint-Aignan, lucky us, there was rain but no wind. It rained all afternoon again yesterday. We didn't see any hunters' cars during the day — on Sunday afternoons in wintertime, a little red van and a little white van are often parked out by the wine-grower's shed out in the vineyard, which we can see from our back windows. Those are "our" hunters' cars.

At about 4:30, I decided to take Callie out for her walk, despite the steady rain. As I stepped outside, I heard hunters' horns, dogs barking, and gunshots. So instead of walking out into the vineyard, in the direction of all the commotion, Callie and I walked down the paved road, around the neighbors' big yard across the road from our house, and then through a little section of woods to the vineyard plots on the north side. 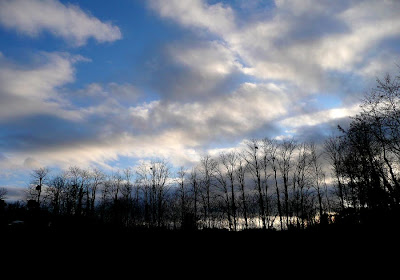 Trees on the edge of the vineyard — you can see
a big ball of mistletoe in a tree on the far left,
and smaller ones in other trees.
As we got out there, away from the road, the noise of dogs baying and some other animal, I think, barking or crying very stressed, panicked sounds — almost shrieks — seemed to be getting closer and closer. I made Callie stay close to me, hoping we wouldn't see whatever animal was being tracked or the dogs tracking it. Callie would probably take off to join the pack if she saw that. I wondered if the hunted animal was a roe deer, or maybe a fox.

The animals got pretty close to us — they must have been very near our house, but on the other side — before they suddenly started moving away. Callie and I looped on around toward the back gate. The barking, panicking animal was definitely moving farther out into the vineyard, toward the tree-lined ravine at the bottom of which there is a little stream that runs down to the Cher River. Its high-pitched squeals were definitely not the barking of a hunting dog. 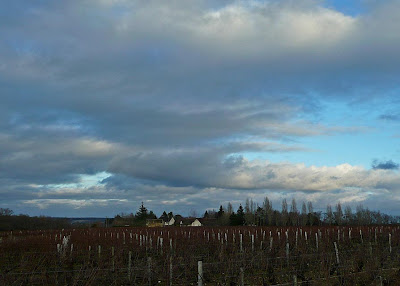 Looking back toward our hamlet from out in the vineyard.
I took all the pictures here last Wednesday, 1/21.
It was with great relief that I shooed Callie into our yard and closed the gate behind us. And with a slightly sick feeling in the pit of my stomach. I hate Sunday afternoons during hunting season, which, I'm glad to report, ends next weekend.
Posted by Ken Broadhurst at 07:58