Fish in a Paris market

Things here are quiet and calm. Even the weather — it's chilly but the sun is out during the day and there's no wind. C'est le train-train quotidien : blogging, cooking, walking the dog, reading the papers (via the Internet), watching a movie or a documentary on TV. Life could be worse. 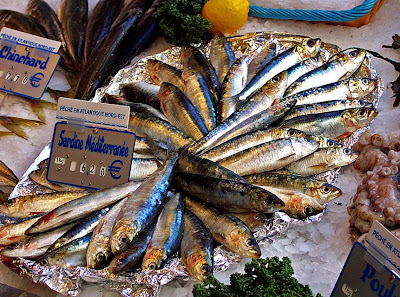 Sardines for sale in a Paris market
I've been looking back at a lot of old pictures. By old, I mean all the photos I've taken since we moved here in 2003.

This is how crevettes — shrimp, prawns,
gambas — are normally sold in France: cooked.
At the end of January 2005, four years ago already, we put the dog in the car and drove up to Paris to see an old friend of Walt's from California. They had been grad students together at Berkeley. He was in Paris on some kind of work junket, and he'd never been to Paris before.

A nice display of poissons.
We tried to show Jim everything in the space of about 36 hours. That's was all the time he had. We went to a big outdoor food market — I think it was the Marché de la Place Monge on the edge of the Latin Quarter. Then we walked down the Rue Mouffetard. 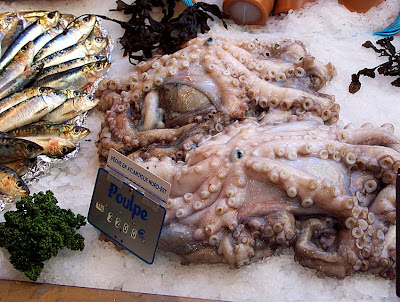 Want some octopus for dinner?
We went up to Montmartre. We walked along the Seine near the Louvre and the Eiffel Tower. We had dinner at the Petit Prince de Paris restaurant near the Panthéon. We wandered through the Marais — that's where Jim's hotel was. We had the dog with us, so our options were limited mostly to outdoor activities. Luckily, the weather was good — about like now.

It's the time of year it is. It makes you think back: Now how did we entertain ourselves in Januaries past? Well, this was one way: we drove to Paris and we wandered around the city playing tour guides.
Posted by Ken Broadhurst at 07:40