We are waiting for the snow to start this morning. Sylvie la boulangère came by and delivered our daily bread — une baguette ordinaire, that's what we usually get — at about 9:00 a.m. I asked her if she could bring us a Galette des Rois tomorrow, January 6. That's the day called the Epiphany, the 12th day of Christmas. It's the day the Three Wise Men from the east arrived in Bethlehem, according to Christian legend, following a bright star, bearing gifts for little Jesus.

A baguette ordinaire from our village bakery, as delivered
And in France, on that day (and on into January) the tradition is to eat a cake — une galette — with a little token hidden in it. The person who gets the token in his or her piece of cake is king for the day and gets to wear a crown. Everybody enjoys the tradition, especially children, and we all enjoy the cakes. Around here, it's a puff-pastry confection filled with either almond cream (frangipane) or apple sauce. We like the almond cream version.

Anyway, Sylvie and I talked about the weather, as everybody here does. She said she would bring the cake tomorrow if she can get up the steep hill on the road that leads to La Renaudière, the hamlet where we live, through all the snow and ice. We laughed. Obviously, neither one of us really believes it will snow much at all. 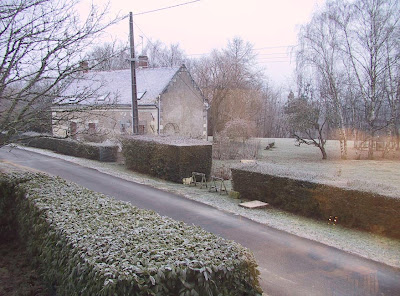 The view out our kitchen window a few minutes ago.
No snow yet, but lots of frost.
This is our sixth winter in Saint-Aignan. We've had several snow flurries in past winters, and one year — 2006 — we actually had about 5 inches of snow that stayed on ground for a week. But then last winter we didn't have any snow at all. Because we live in a big river valley, not that far from the Atlantic Ocean and the Gulf Stream,we have a fairly mild climate.