C'est la pagaille dans les aéroports ! Chaos in the airports — that's what they said on the TV news this morning. A thousand of more travelers have been stranded at Charles de Gaulle airport outside Paris since yesterday morning. The snow that fell over much of the northern half of France yesterday is to blame. 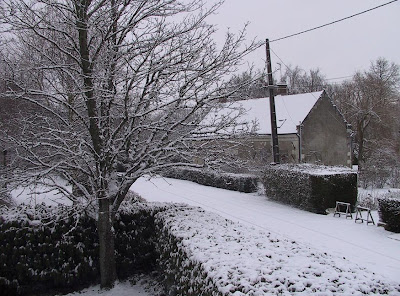 Looking out the kitchen window early this morning
The high speed trains on lines north of Paris are running with significant delays too, because of the weather. And France set an all-time record for daily electric consumption yesterday. The authorities are asking people to go easy on the electricity today, to avoid power failures. 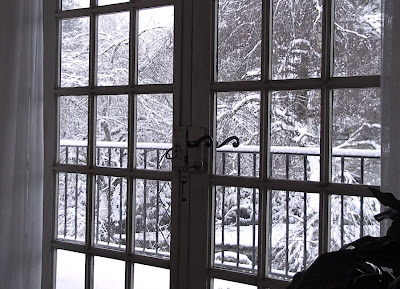 Snow out the French doors in the living room
Callie wants to go outdoors. It's her time. She's never seen snow before, in her two short years on the planet.

Two hours later... I took the dog out for a quick walk in the snow. She loved it. She ran around like a maniac. There were deer tracks everywhere, and that got her excited I'm sure. It's all about smells. 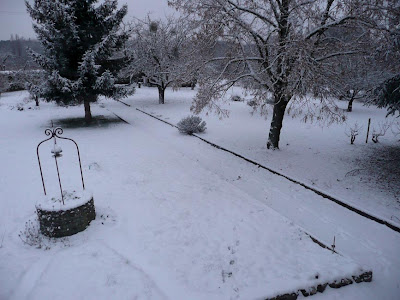 And looking at the back yard out the bedroom window
We are wondering whether Sylvie will be able to get up the hill with our bread and special cake today. She usually gets heres between 10:30 and 11:00 on Tuesdays. But not a single car has come up the hill this morning. Our neighbor the mayor did go out, a little later than usual, but she was sliding down the hill in her Peugeot, not spinning wheels to try to come up it. Duty must have called.

It's also garbage day. Will the truck make it up the hill? No sign of salting, sanding, or plowing yet.

P.S. Sylvie did make it up the hill with our daily bread and our Galette des Rois. She was about 30 minutes later than usual, and she said our hill was the worst one she had to drive up this morning. So lunch is turkey-barley soup, cheese, and then galette as dessert.
Posted by Ken Broadhurst at 08:07