My blog counter is up over 101,000 "hits" or "visits" now. It started counting your visits in late January 2006, nearly three years ago. If you open the blog four or five times a day to look at comments or whatever, you get counted each time. So I have no idea how many different people actually look at the blog over the course of a week or a month, or just how many times any one person open it. 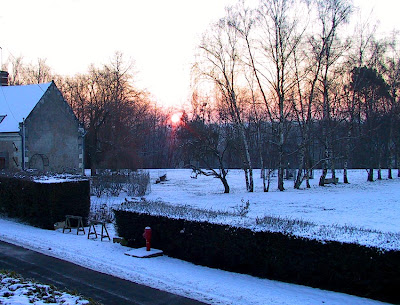 Today's sunrise, from the kitchen window
But once a month or so I'll get an e-mail from somebody who has been reading and who wants to let me know, but who doesn't necessarily want to leave a comment. I got one of those e-mails just the other morning, from a French woman who has been living in Austria for many years. Saint-Aignan is her home town, and she said she discovered Living the Life in Saint-Aignan a few months ago when she was doing a Google search for recipes for quince jelly (gelée de coings, which I made and blogged about a couple of years ago).

She said she couldn't believe there would be Americans living in Saint-Aignan, and at first she thought to herself that I couldn't possibly be writing about the Saint-Aignan where she grew up — there are at least 14 towns and villages in France named Saint-Aignan. But reading a little and looking at pictures convinced there that I really am in "her" Saint-Aignan. I'm always happy to receive such e-mails and to know people are looking at my posts and photos. 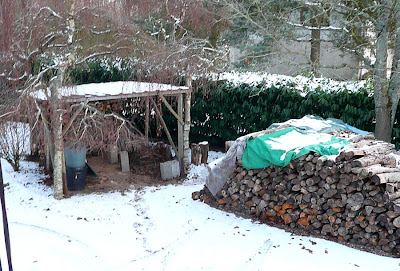 Thank goodness for the woodpile this winter.
Just a couple of days earlier I had an e-mail from a French woman who is a make-up artist working in the movie industry in Los Angeles. She said she's been living there for many years and likes reading my blog as well as other expatriate Americans' blogs including La France Profonde and Chez Loulou. "I can't tell you how happy I am reading these different blogs (and checking on the people who comment on yours...)," she wrote. "It helps me stay in touch with France."

The e-mailer from L.A. continues: "I was laughing as I was going through your blogs. It is sooooo French to comment on the weather." She says her husband, a native Angeleno I presume, used to always wonder why her parents would give on many details about the weather they were having when they got them on the telephone. "We don'treally have 'weather' in Southern California and this just dawned on me," L.A. says. I know what she means, having lived in California for many years. San Francisco has weather but doesn't really have seasons — at least not the way France and eastern parts of the U.S. have distinct seasons. 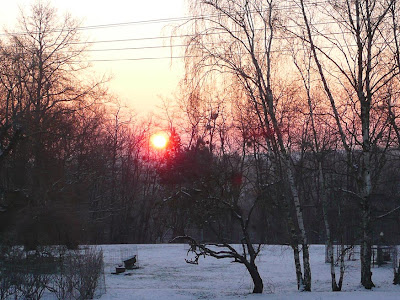 January sunrise close-up
(Speaking of the weather, it is back down to –7.7ºC this morning, or +18ºF. Some of the snow and ice on the roads melted yesterday, but now it is frozen solid again. It must be treacherous out there. Walt said the snow in the vineyard is still powdery this morning. He just got back from his walk with Callie.)
A few years ago, I got an e-mail from a psychotherapist in San Francisco who said my blog made for good morning reading before the day's professional appointments began. I've also heard from and ended up meeting a professor from Montréal who grew up in Saint-Aignan and whose mother still lives here. Plus an old friend from my Paris days 30 years ago who got in touch to say he had found my blog. And Claude, of course, of Blogging in Paris, a Parisian woman who I feel I've known for 40 years because of mutual friends back in Illinois but who I actually met for the first time in person about 3 years ago after finding her blog completely by accident. 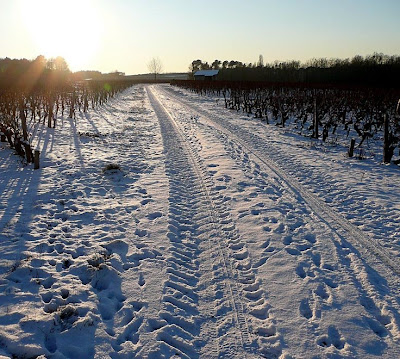 Snowy vineyard road
Among the commenters on this blog, too, are many interesting people. There's the retired U.S. government translator who was born in Paris, has lived in America for 40 years, but who still has his apartment in Paris. There's the IBM software engineer, one of my best friends, who used to teach French way back when and who visits us often. There are people who are or were employed at e-Bay, HP, Apple, and other companies in the S.F. Bay Area, where I used to work, including one who has now re-located to North Carolina. And a couple of current and retired Microsoft employees, one still in Seattle and another in south Florida.

Not to mention a librarian in small town in Pennsylvania who loves France and eastern North Carolina as I do (we were destined to be friends). An American woman who teaches French in St. Louis, Missouri, and whom I first knew in Paris more than 25 years ago. A woman in Alabama, now a good friend, who with her husband, a retired surgeon, has invited me and Walt into their home there and who has visited us here in Saint-Aignan several times.

A church organist who used to live in St. Louis and then in Alabama but who now lives and works in North Carolina — she and I were grad students in Champaign-Urbana at the same time back in the late '70s, but we met only a couple of years ago when she visited us in Saint-Aignan. A woman from Ontario, Canada, who lives in town about 30 miles from where I grew up, and who has also visited us in Saint-Aignan. A retired U.S. government writer and editor from Chicago via Washington DC who now lives in California and has long been a good friend to me. 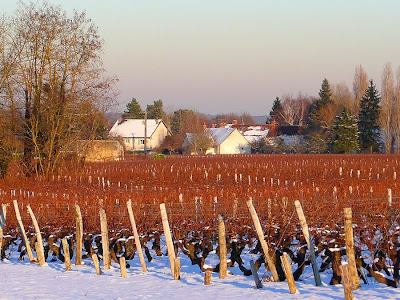 La Renaudière, near Saint-Aignan-sur-Cher
Other readers and commenters are American expats in France, including Loulou and Betty C., who we hope to meet up with in person before too much more time goes by. We have already met and enjoyed spending a little time with Susan and Simon, the Australians who have a house in France not far from Saint-Aignan, and blog on Days on the Claise.

These are only some examples. Many others have written e-mails to say they were coming to visit the area and wondered if we might get together. And we have gotten together. I've left many out, including a lot of regular commenters. By the way, it would be interesting to know what happened to Claudia in Toronto, who left so many good comments in the past. 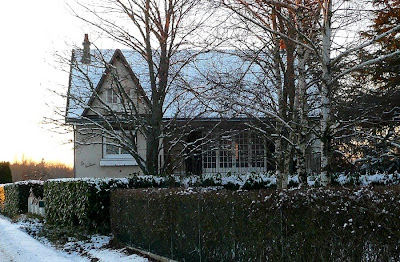 Our house from the road, after a snowfall
Walt has a whole list of other people whose blogs he reads and who leave comments on his blog. There is some overlap, of course, but we have our own blog lives and circles of blog readers and writers.