Yesterday morning at this time the temperature was about 20ºF colder than it is this morning. That was the fastest and shortest-lived cold snap on record. It's just barely below freezing right now, but it's supposed to stay that way all day. Unlike Dan in Texas, I won't have to pull the bermuda shorts out of storage before April or May. 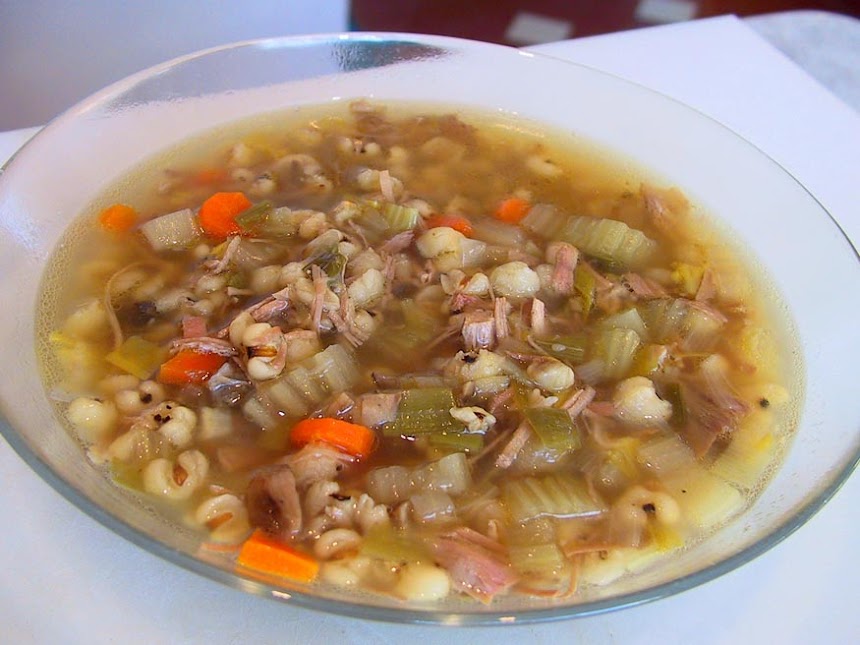 Turkey & barley soup
I'm so glad I decided to make turkey and barley soup a couple of days ago. Eating it — slurping it — has kept us warm during our mini ice age. It was Walt who remembered that we had a package of pearl barley down in the pantry. It was one we had bought at the Paris Store in Blois (an Asian grocery) and it was imported from Thailand of all places.

And I knew we had an enormous turkey thigh in the freezer, plus a couple of blocks of chicken broth that I had put away after we poached a capon for Christmas dinner. That turkey thigh must have weighed between 2 and 3 lbs. I buy them at Intermarché when they go on sale (€2.99/kg) and put them in the freezer. 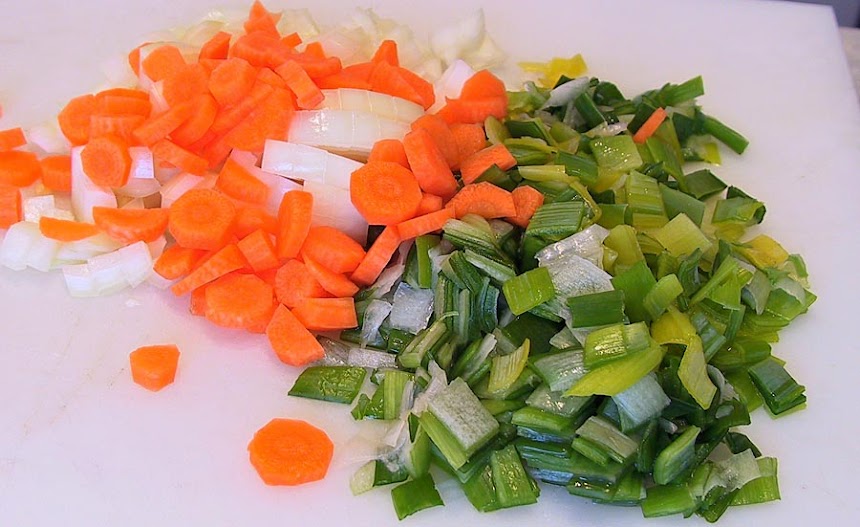 Onions, carrots, and leeks
To me, a soup like turkey & barley is all about the broth. Then it's about some turkey, onions, carrots, celery, and mushrooms. And barley, which has a nice nutty flavor.

When I make chicken or turkey broth, I always put 3 or 4 allspice berries, 8 or 10 black peppercorns, and 2 or 3 bay leaves in the pot. If I'm making a lot of broth, say 6 to 8 quarts, I'm liable to also throw in a whole star anise fruit and a small stick of cinnamon. You don't want spices to overpower the poultry taste, but you want their flavors in the background. Oh, and don't forget to put in an onion and a carrot or two. A dried hot red pepper is optional. Salt is required. 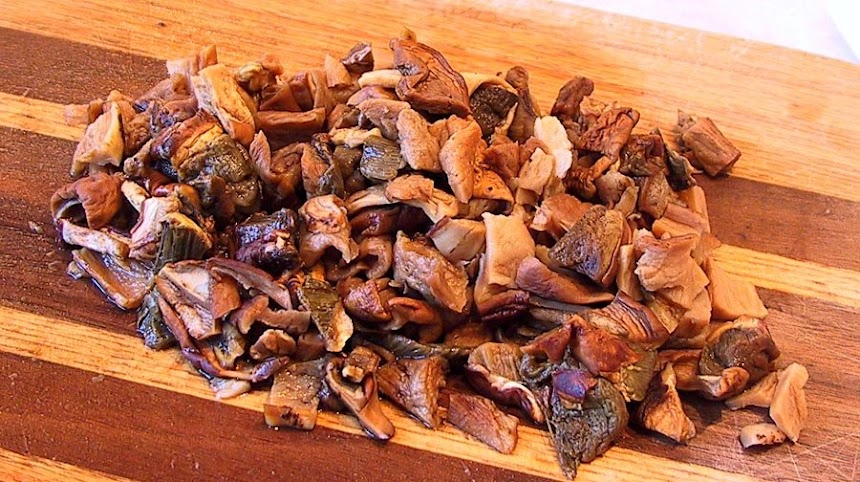 Dried porcini mushrooms, rehydrated and chopped
That's pretty much how my capon broth (6 qts.) was flavored. To make the soup, I put the big turkey thigh in the broth in a stock pot on the stove and cooked it at a bare simmer for a couple of hours. I wanted it to give most of its flavor to the broth, so I put it into cold liquid and then slowly heated it up. When it was cooked, I left it to "marinate" in the broth overnight, in the fridge or in my case in the cold downstairs pantry, as it cooled down down. 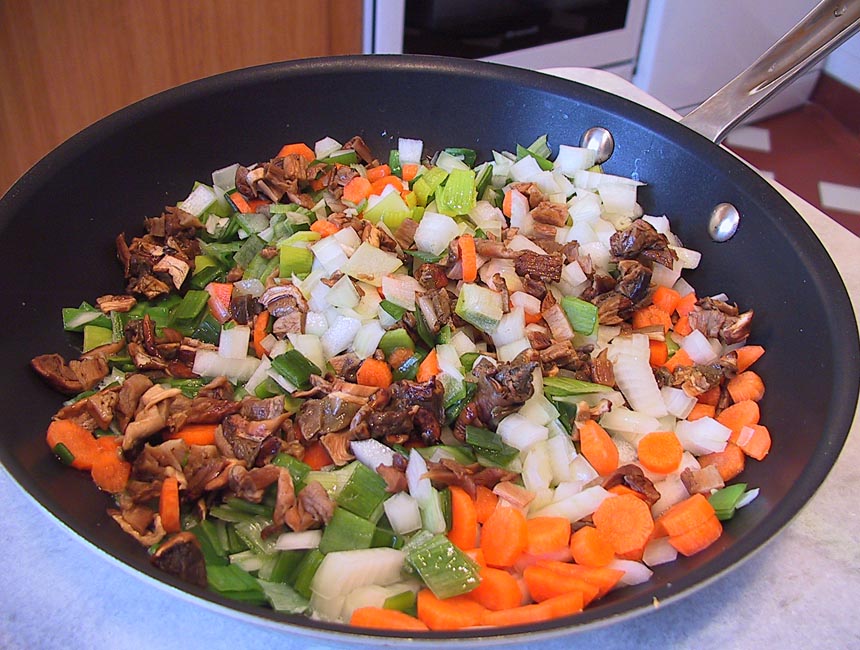 Sauté the vegetables lightly and then put them in the soup.
The next morning heat the pot back up slightly while you chop some leek leaves, a big onion, a couple of stalks of celery, and a couple of carrots. Soak some dried boletus edulis mushrooms (porcini in Italian and American, or cèpes in French) in hot water to rehydrate them. If you don't want to chop the mushrooms into smaller pieces for the soup, just put them right in to the broth without soaking them first. If you do soak the mushrooms, add the soaking liquid to the soup broth. Chopped, fresh button mushrooms would be good too, if you have them, with no soaking required. 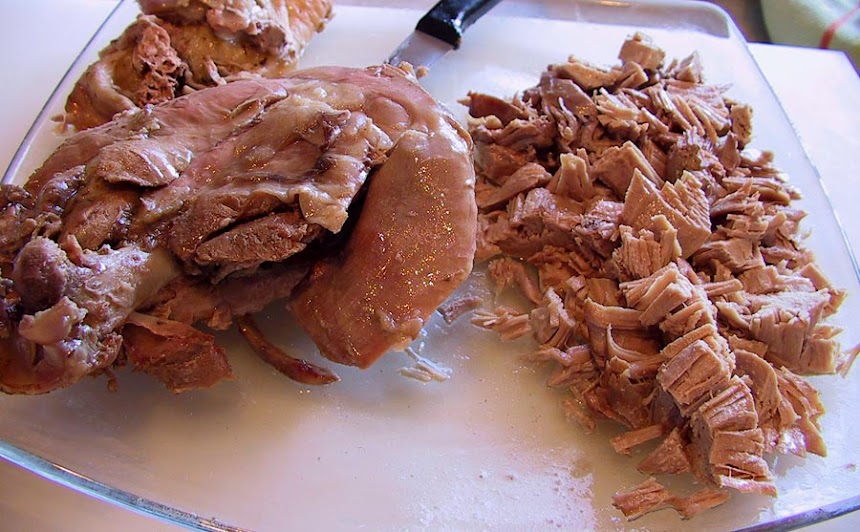 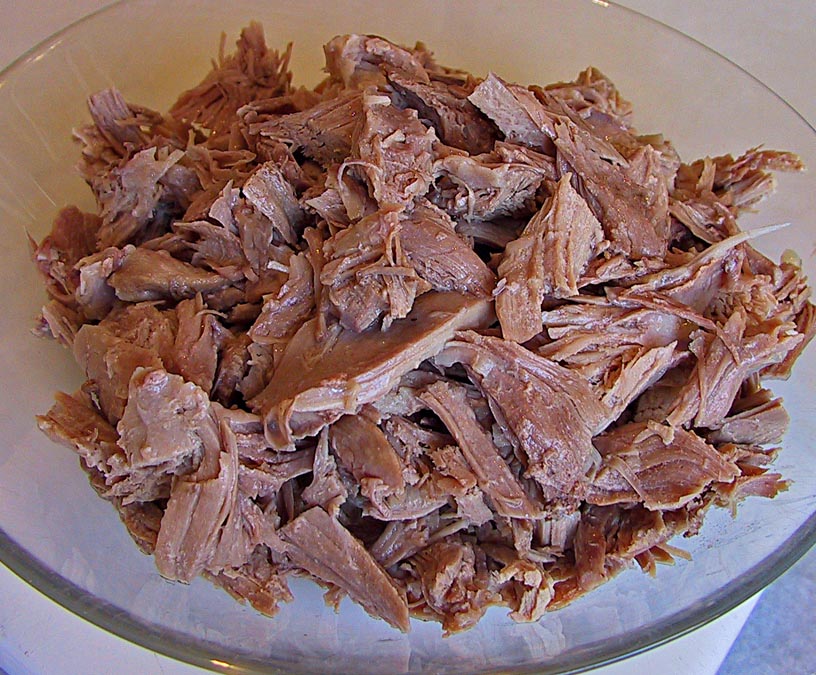 A deboned, shredded turkey thigh
It is a good idea to cook the barley separately before adding it to the soup. Take some broth out of the stock pot, say 3 or 4 cups, and cook the barley in it in a smaller saucepan for 30 to 40 minutes. If everything is cooked just right before being added to the soup broth, you won't end up with some ingredients overcooked and others not cooked enough. Or everything overcooked, in other words.

"Pearl" barley is called that because of the whitish color of the barley kernel once the brown husk has been ground away. Pearl barley cooks a lot faster than whole barley.

Once the turkey is shredded and chopped, and when the vegetables are sufficiently cooked and the barley is tender, everything just needs to be stirred into the broth and the whole thing heated up again. By the time you serve and eat it, it will all be perfectly done. 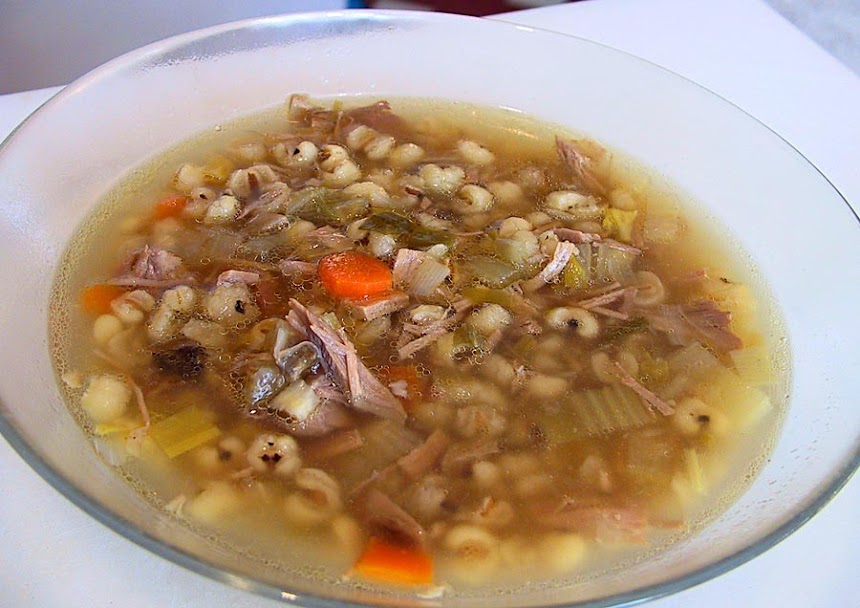 Soup's on.
Serve the soup with — au choix — crème fraîche, butter, or tabasco sauce (especially that smokey chipotle tabasco). Whatever condiments you want. And bread of course.

Here's a similar turkey soup recipe on Elise's Simply Recipes blog. She explains how to make the stock and "sweat" the vegetables. Substitute barley for the noodles, rice, or potatoes. All the grain/starch options are good ones.
Posted by Ken Broadhurst at 07:39