Lunch and a walk in Preuilly

It was a very easy drive down to Preuilly-sur-Claise yesterday. There was practically no traffic on the roads — there were a few cars in Châtillon-sur-Indre, where we stopped to get some cash out of the ATM at a Crédit Agricole office — and it didn't rain at all. Temperatures were slightly above freezing and skies were gray in the morning.

We drove in and found Susan & Simon's place without any trouble. We'd been there once before, last June, and I remembered how to get there. They were waiting for us in their warm main room, heated with electric radiators while they figure out what the best kind of heating system to have put in in their historic old house.

We had a gift exchange. We took S&S a bottle of Jean-Noël Guerrier's red Côt wine and a bottle of white Sauvignon wine from the Domaine de la Méchinière, both of them wineries in Mareuil-sur-Cher not much more than a kilometer from our house. We also took them a jar of apple jelly I made from our back-yard apples last summer, and a jar of plum preserves that I made from our own plums in 2007.

S&S gave us a fruitcake that Susan made, and we ate some of it when we got home last night. It's dark, sweet, slightly spicy, and full of nice fruits confits — delicious. Not at all like that same old dry American fruitcake that's been making the holiday rounds for umpteen years. 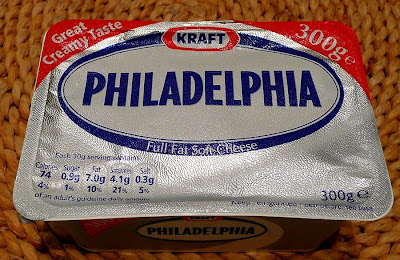 I see home-made bagels in our future.
S&S also brought us a special American present from London: I big tub of Philadelphia cream cheese. It never occurred to me that Kraft Philadelphia cream cheese was available in England. We can't get it here. Walt makes a mean bagel, as you might know, and now the pressure is on. Doesn't a bagel with cream cheese and a slice of smoked trout or salmon, with a big cup of black coffee (and maybe a glass of champagne!) sound like a fine way to start the new year?

Simon also made us a DVD of a British TV satire show about the American presidential election. We'll be able to watch that as we munch on bagels and cream cheese. Simon also poured a nice glass of sparkling wine from Saumur as a pre-lunch apéritif.

For lunch we walked just around the corner from their house to the Hôtel-Restaurant de l'Image. I posted a link to one of S&S's posts about it yesterday. I had my camera in my pocket and fully intended to take some pictures of the interior of the restaurant and the food we were eating. But we were so involved in conversation that I completely forgot. We were finishing dessert when I remembered. It was obviously too late.

What did we have? Well, Simon, Walt, and I all had an œuf cocotte avec jambon et crème as our starter course. That was an egg broken over a piece of ham in a ramekin with some cream around it. I can imagine the cream was poured on boiling hot so that the egg white cooked, and then the whole thing was quickly heated up in a hot oven. The yolk was still runny and we were given a big soup spoon with which to eat the contents of the ramekin. It was delicious.

Susan had a salade piémontaise, which is a kind of potato salad with mayonnaise and also other chunks of vegetables in it — tomatoes and sour gherkins (cornichons) especially — along with some chopped hard-boiled egg and some ham. It looked very good.

As our main course, Simon, Walt, and I all had a tajine d'agneau, a Moroccan-style braise of lamb with spices. It was served either with potatoes au gratin (that's what Walt had) or mixed vegetables (Simon and I had the veg'). The meat was tender and tasty, subtly spiced.

Susan had a duo of salmon and a white fish (brochet, pike, maybe) cut into chunks and cooked in a sauce in a gratin dish. It was very good too, she said.

For wine, we just ordered two little carafes of the house wine, a red and a white. Both were more than pleasant. In a little restaurant at lunchtime, that's the thing to do. Order wine by the pitcher. It's less expensive, it meant we could sample some red and some white wine, and it is always good. A nice little restaurant is not going to serve you a wine that isn't good or doesn't go with the food they are serving.

For dessert, Walt and I each had a "floating island" — île flottante — which is a couple of dollops of sweetened, beaten egg whites floating on dish of English custard (crème anglaise) with some shaved almonds on top. Simon had a cake called a gâteau médiéval, which was made with apples and walnuts. It also sat in a puddle of custard. And Susan had a concoction of prunes and chestnut cream (crème de marrons) served with whipped cream (crème chantilly). Which reminds me that I ought to buy a tin of crème de marrons when we go to the market this morning.

While we ate, Callie slept in a corner, halfway under our table and out of the way of the wait staff. We pretty much forgot she was there until, toward the end of the meal, she started making the little grunting and squealing sounds she makes when she is having a particularly enjoyable dream, probably about chasing a rabbit or a deer out in the vineyard. By then, we were the only people left in the restaurant.

So the Restaurant de l'Image gets high marks in my book. I enjoyed the meal and and the atmosphere. I obviously enjoyed the conversation, to the point of forgetting to take photos. The owner knows Susan and Simon, of course, and he came and spent 10 or 15 minutes talking with us as we finished our after-dinner coffees. He's interested in their house renovations and plans. We talked about heating systems of different kinds, and what makes the most sense for the future.

The sun had come out. We went out for a nace walk around the town with Callie, up by the château and the church and through some narrow residential streets....
Posted by Ken Broadhurst at 07:37