Hushpuppies (no, not the shoes)

Yes, Hushpuppies (capital H) are a brand of shoes. But in a large part of the United States, hushpuppies (lowercase H) are a kind of fried cornbread. The unofficial etymology of the term has to do with cooking around a campfire and throwing some of the fried cornbread to the "pups" to keep them quiet. Who knows?

In my home town there is a very big seafood restaurant called, of all names, the Sanitary Fish Market & Restaurant. The restaurant's web site explains the name (but with quite a few typos). My maternal grandfather, who died in 1939, worked with the two men who founded the restaurant. Both of them were still active in the business in the 1960s and 1970s, when I was growing up.

The Sanitary (a.k.a Tony's among local people) is famous for its hushpuppies. Here is the recipe for the restaurant's fried cornbread that you will find on the Sanitary web site. 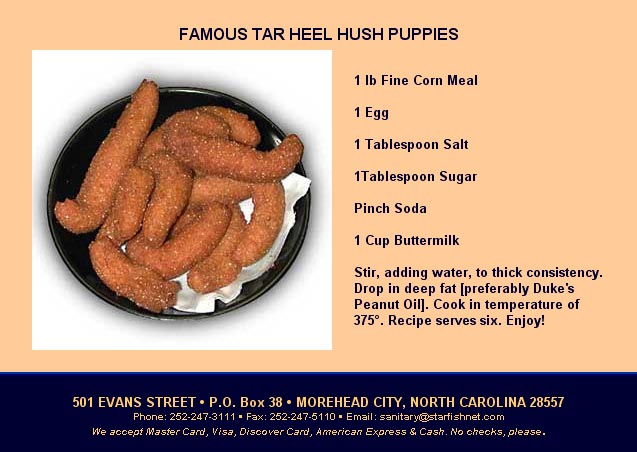 Tar Heels are people from North Carolina, as Sooners
are from Oklahoma and Hoosiers are from Indiana.

And here is my mother's recipe. It's not very different:

Add enough water to the mixture to make a very stiff batter. Cut the batter with a wet spoon and drop in hot oil. Cook the hushpuppies until they're golden brown. Dip the spoon in water each time to keep the batter from sticking to it. Serve the hushpuppies with butter.

Some people who are new to eating hushpuppies have a a hard time understanding that they are a kind of bread. You don't normally eat them with ketchup or tartar sauce. They do not replace a vegetable or French-fried potatoes. They do replace other kinds of bread. 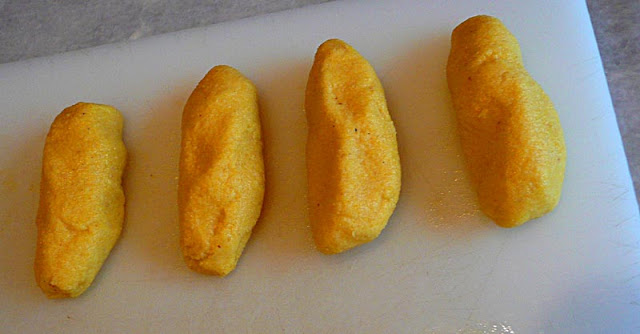 Hushpuppies shaped by hand rather than dropped from a spoon

Hushpuppies surely date back to a time or developed in situations when people didn't have easy access to an oven for bread-baking. You can heat a pan or pot of oil on a campfire, for example, and cook hushpuppies just fine that way. If you are on an overnight fishing trip, you can cook your catch in cornmeal and make hushpuppies to enjoy with the fish.

Some cooks put minced or chopped onion in their hushpuppy batter. Others, like many people in eastern North Carolina, are purists about such things. But personally, I admit that some onion in the hushpuppies can be pretty good. My mother lists adding 1 or 2 tablespoons of finely minced onion as a variation on her recipe.

You can substitute plain yogurt or a 50-50 mixture of milk and yogurt for the buttermilk (buttermilk being hard to find in France). Or you can add a tablespoon of distilled vinegar (vinaigre blanc) to a cup of milk and use that in the place of buttermilk. 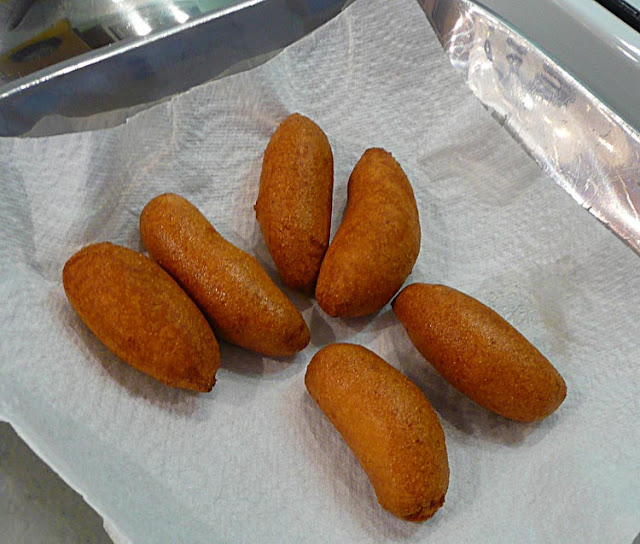 Some recipes might include some amount of wheat flour in the hushpuppy batter. I can't see why you'd want to put that in. Don't use cornmeal that's too coarsely ground, however, like French semoule de maïs, or the batter won't hold its shape. You'll end up with a fryer full of burned crumbs instead of nicely shaped, golden hushpuppies. Use farine de maïs if you're in France.

In North Carolina, we eat hushpuppies with fried seafood, but we also eat them with barbecued pork, which is dressed with a vinegar and red pepper sauce. And always hot, with butter. Don't eat too many! 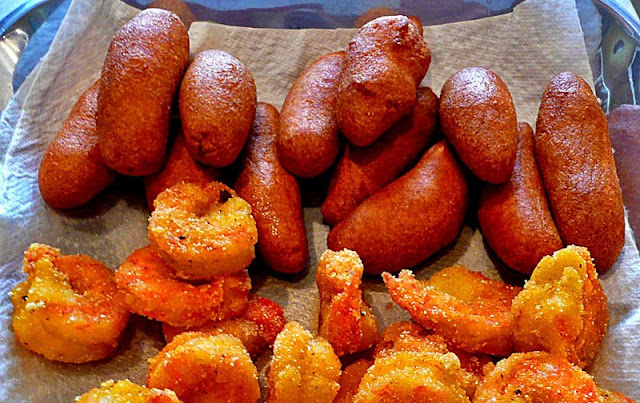 In his book Classical Southern Cooking (1995), Damon Lee Fowler says this about hushpuppies:


These morsels of fried cornmeal batter are something of an enigma. They are so commonplace in Southern cookery nowadays that it seems as if they have always been around. There is even a popular legend, supported by early recipes titled Fried Pone, crediting them to American Indians. However, the earliest recipes I have found that are recognizably like modern hush puppies date no earlier than turn-of-the-century New Orleans. They were called beignets de maïs and were lightly sweetened puffs of cornmeal, egg, and milk, deep-fat fried and dusted with sugar. Only in the second decade of the twentieth century did unsweetened recipes for fried pone and cornmeal fritters begin to appear...

Modern hush puppies know no in-between. When they are good, there is nothing better, and when they are not good, well, nothing is worse.