I'm not sure where the idea to make veggie burgers came from. For weeks we've been saying we wanted soon to make ourselves some good hamburgers, since that's something we don't get here. I even went out and bought some nice lean beef we might grind up. 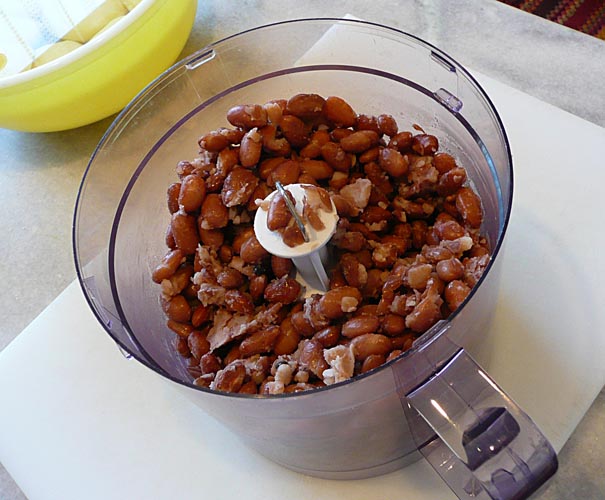 Instead of beef, beans

I told Walt he should make some buns for our burgers. We had seen a French Cuisine TV cooking show not too long ago where the cook made such buns. Hamburgers seem to be all the rage right now, judging from the shows we see on Cuisine TV. 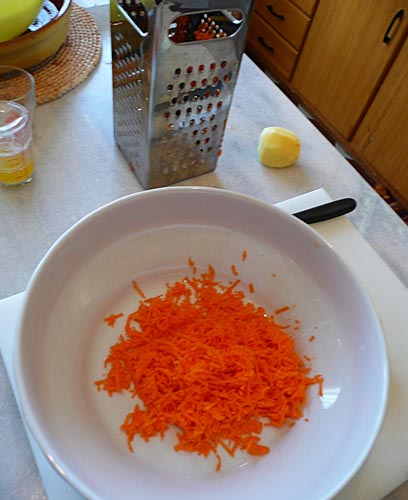 Grate a carrot, a zucchini, and a couple of potatoes


And now that I've written that, I remember that it was chef Eric Léautey on his current cooking show who showed how to make veggie burgers last week. He also made foie gras burgers on the same show. We went for the veggie burgers, but didn't end up using his recipe.

So our hamburgers became veggie burgers, and that actually sounded even better. I did some searching on the Internet and came up with a few ideas. We adapted the best looking recipe among them to our ingredients. By the way, I've never seen pre-made veggie burgers in the freezer sections at our local supermarkets. Making them from scratch is better anyway. 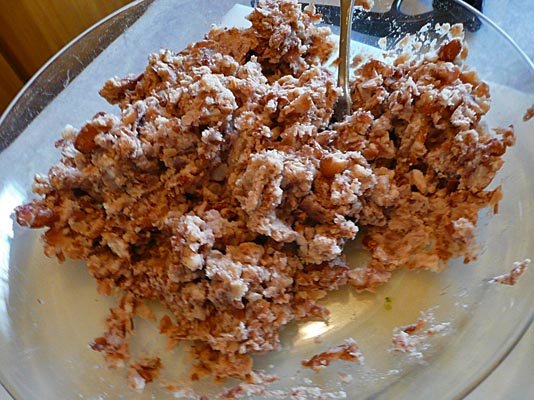 
For example, many veggie burger recipes call for black beans. We don't get those here in the French countryside. But I did have half a bag of dried pinto beans in the cellar. I decided to use those, and I cooked them in water with a bay leaf, a little onion, a couple of allspice berries, and half a dozen black pepper corns. That took about 2 hours, for the quick soaking and the cooking. 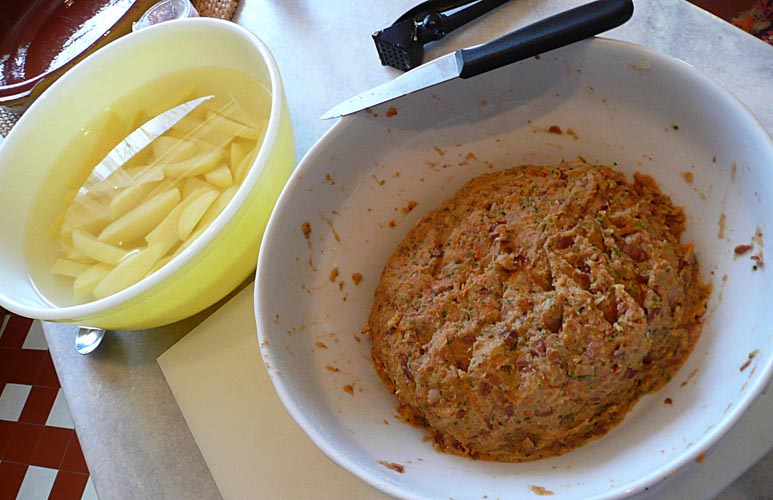 Veggie burger mixture and some wedges of potato


Meanwhile I grated a big carrot and a small raw onion. We have bags of grated zucchini from the garden in the freezer — grating raw zucchini is a good way to prepare it for freezing. When you thaw it, the water comes out and you can use that in soup. Press the grated pulp to remove as much water as possible if you are going to use it in a veggie burger mixture or in a quiche. Or cook it with the water in a soup. 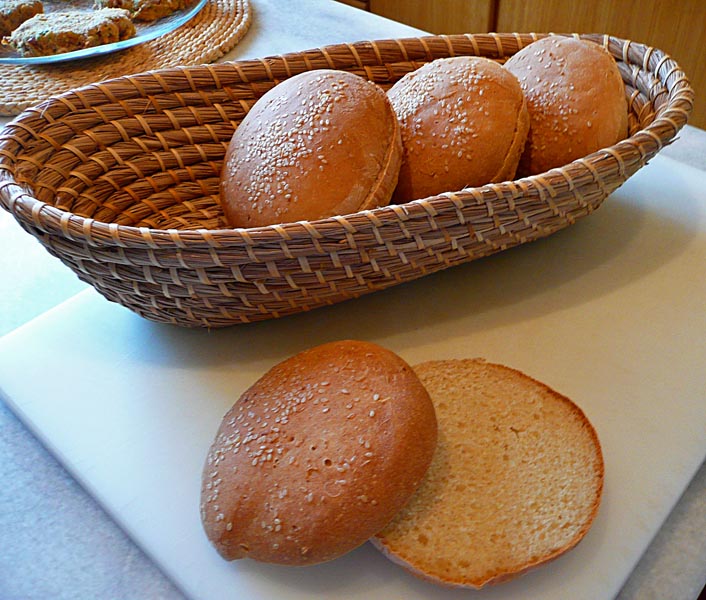 The buns Walt made with a French chef's recipe


I also grated three small potatoes. The beans were done, so we drained them and Walt mashed them with the potato masher. (I tried to pulse them in the food processor, but that wasn't a good idea so I took them back out for mashing.) Two good cups of beans went in with the grated vegetables to make the burgers. 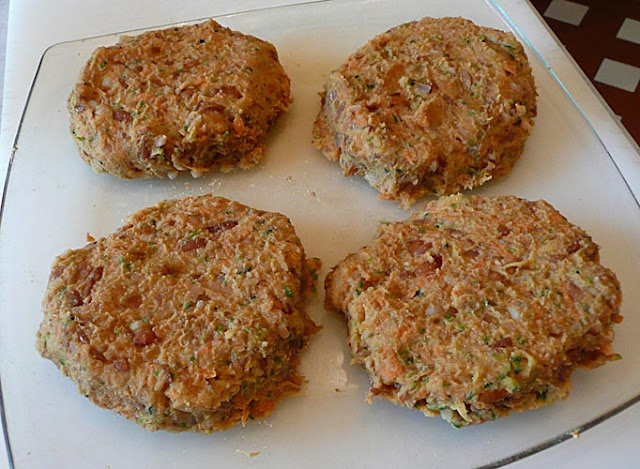 
We added maybe half a cup of corn meal to the mixture to make it dry enough for forming patties. And we spiced it with a good amount of salt and black pepper along with two or three tablespoons of curry powder. You could use about any mixture of cumin, cayenne, paprika, ginger, nutmeg, cinnamon, or other spices — or none at all. To taste, in other words. 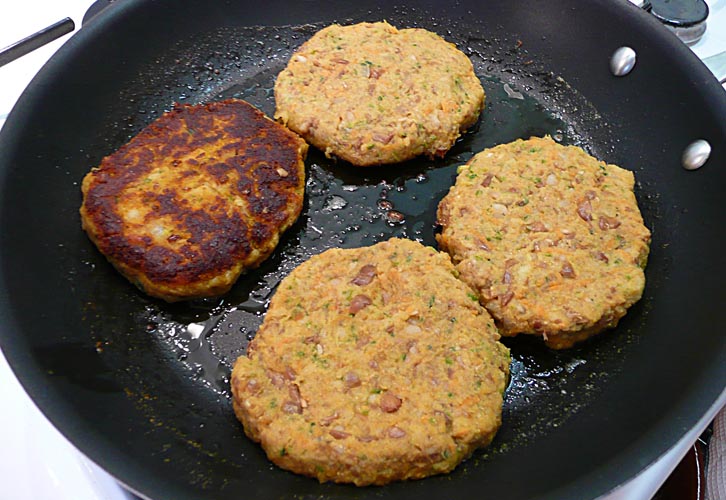 
There was enough veggie mix to make eight veggie patties. Four of them went into the freezer for later and four of them got cooked. Only two got eaten, because they were pretty filling.Walt had made buns the day before. At first he said he didn't like the recipe, but in the end the buns came out great. You can see that from the pictures. 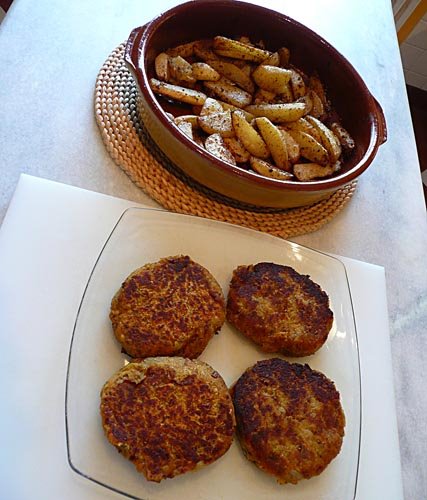 
We also made curried, oven roasted potatoes from a recipe that Loulou posted on her blog in two parts — here and here. They were perfect with the veggie burgers. Loulou of Chez Loulou is posting a lot of good exotic recipes these days, including this one for corn chowder. I'm going to make that one soon.
Posted by Ken Broadhurst at 07:49