Last Monday, the morning after C & J arrived for their visit, we received a special delivery of good boulangerie products. On Saturday, I had asked Sylvie, la boulangère, to bring us four croissants, two pains aux raisins (raisin rolls), a sliced pain aux céréales (multi-grain bread), and our regular baguette. In fact, I ended up buying a pain (500 grams) and a baguette (250 grams) that day. 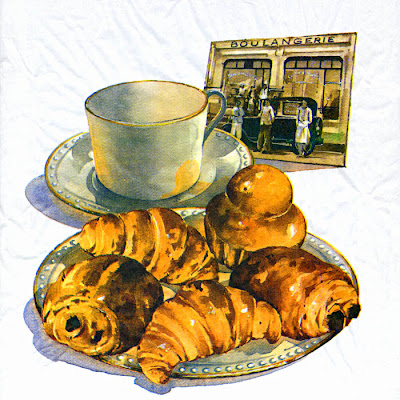 Sylvie put some of the items in a nice paper bag with the artwork above on it. Usually she just hands us our daily baguette, with no paper changing hands. In other words, it isn't wrapped. And we almost always pay in the coin of the Republic.

On Wednesday, we went to one of the butcher shops in Saint-Aignan — there are two of them — to buy some sausages for dinner. We had a boudin noir (blood sausage), a boudin blanc (veal sausage), a saucisse de Toulouse (plain pork sausage), and a saucisse fumée (smoked pork sausage). The four of us shared those and I made a scalloped potato dish with onions to go with them. We also bought a slice of what is called tête persillée — head cheese made with the little chunks of meat picked off a cooked calf's head and a lot of parsley — to have as an appetizer the next day. 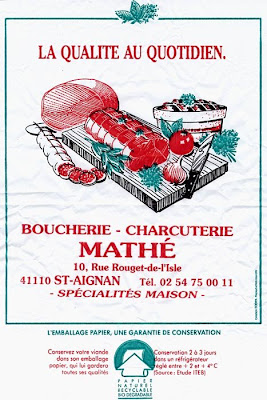 The sausages from the Boucherie-Charcuterie Mathé came wrapped in the paper above. This was the first time I realized that this butcher shop also advertises itself as a charcuterie (pork products) shop.

We also went to the other butcher in town that afternoon, to buy a leg of lamb for Thanksgiving dinner. It was a big leg, and the butcher there trimmed it up beautifully. It's always fascinating to watch the butcher prepare a roast and admire his or her skills with a knife and a length of string. 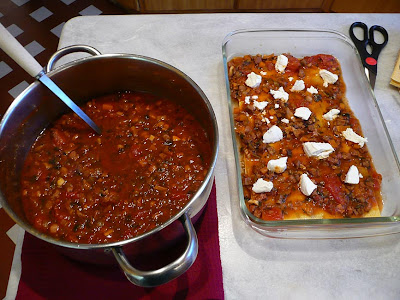 Making lasagna with a lamb-vegetable-tomato sauce and ricotta cheese
The leg of lamb cost 44.00€, which is a lot of money to me. But so far, we have had two meals for four people out of it. And yesterday I made lamb lasagna with part of the leftovers. That served the two of us yesterday and there are four portions left that I put in the freezer. In the fridge there is still enough nice lean lamb for two — today's lunch. If you add all that up, it comes to 16 generous portions. So about 2.75€ per portion. That's not too bad, especially since it is so tasty.
Posted by Ken Broadhurst at 08:40