This is a special Christmas post to all those who have sent greetings to La Renaudière for the holiday season, whether by mail or in comments on the blogs. I won't start naming names because I'd be bound to leave somebody out. Peace on Earth. Merry Christmas.

Let me say a special word to Mimi in Boston, though. Thank you for the card and the messages. I'm afraid I'm a lousy correspondent. You are in our thoughts, mine and Walt's, during this season. I hope you are able to spend the holidays with friends and family. 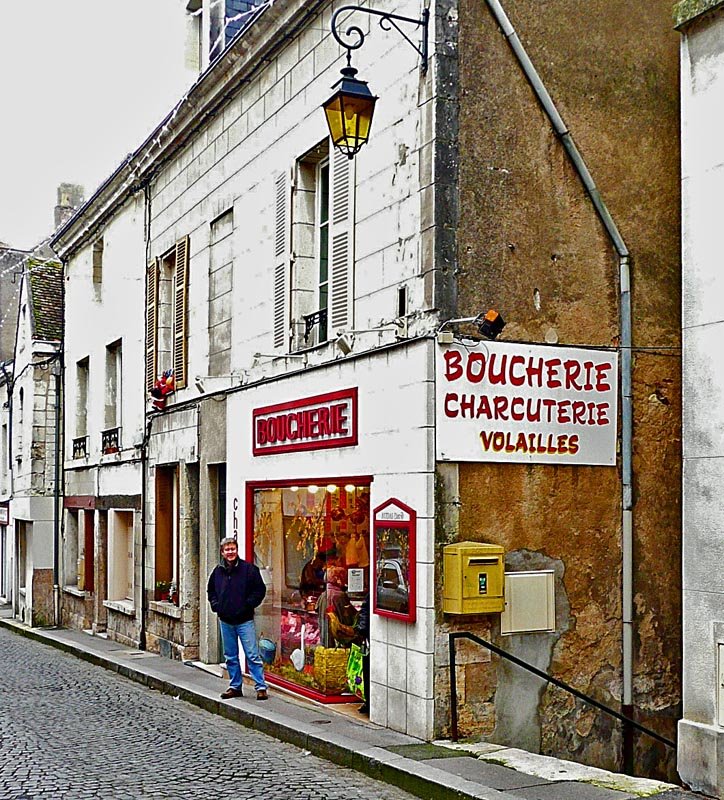 Here's Walt yesterday in front of one of the
two butcher shops in Saint-Aignan.
It is French tradition to send greetings for the New Year rather than for Christmas, which is still a family holiday here and is fairly private. People spend Christmas with family and New Year's Eve with friends and neighbors. In January, people sometimes send cards, but more often they make a special effort to see or telephone people to offer them the expression of their Meilleurs Vœux — Best Wishes — for the year to come, and especially Bonne Santé — Good Health.

Some of the people we make a point of saying our Meilleurs Vœux to include Madame Smith and her colleagues at the pharmacy; our neighbors the mayor and her husband; Sylvie the boulangère who delivers our daily bread; our summer neighbors who up live in Blois; the woman we bought our house from, who now lives in Tours; Madame Barbier who cuts our hair; Bruno and Patricia who operate the Domaine de la Renaudie winery; and several other people we've become friends with in the village. And all of you who read our blogs, of course.

We had a beautiful Christmas Eve afternoon here in Saint-Aignan. After a foggy, chilly morning, the sun broke through early in the afternoon. It didn't warm up much outside, but with the sun my afternoon walk with the dog was very pleasant. 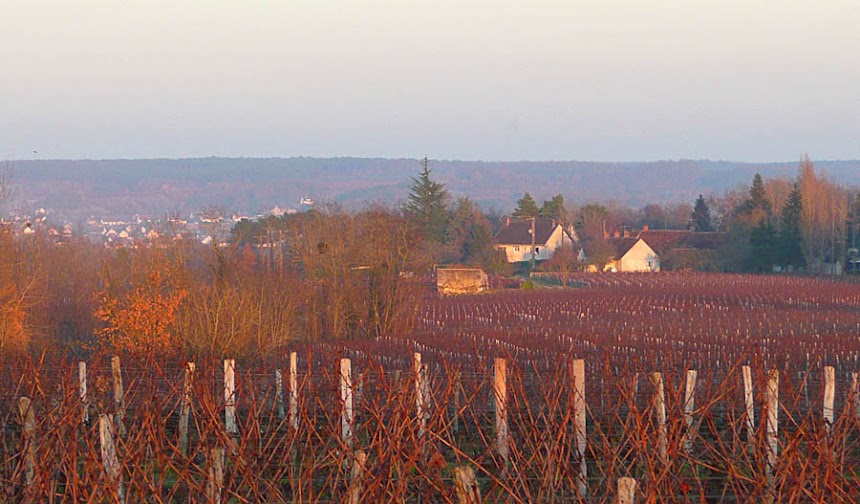 Christmas Eve at La Renaudière.
It looks peaceful, and it was is.
In the morning, we went into town to get some fruit and bread to have with our cheese fondue. We'd been told that there might be vendors from Alsace at the special Christmas Eve market in Saint-Aignan, but we didn't see any. Only about half the regular Saturday vendors were there, but those included the big seafood stand, the mushroom lady, and at least two each of poultry vendors, selling both raw and cooked birds, and produce stands.

After looking around the market and buying some apples, we drove up to the bread bakery in the vineyard to get bread that is cooked in a wood-fired oven. We got what they call a Tourte de Meule, which is a round loaf of brown bread that will be good, toasted, with foie gras; a Pain de Tradition, white bread that we had with the fondue; and a little Pain aux Châtaignes, a dense and slightly sweet bread that is made with chestnut flour.

In the afternoon, we were busy in the kitchen. I made stuffing for today's capon using a pan of cornbread I'd made a few days ago, some multi-grain bread, a lot of onions and celery, some dried figs, and some sausage, along with herbs and spices, butter and chicken broth. Walt made crêpes — he's going to use them to make Crêpes Suzette this afternoon. 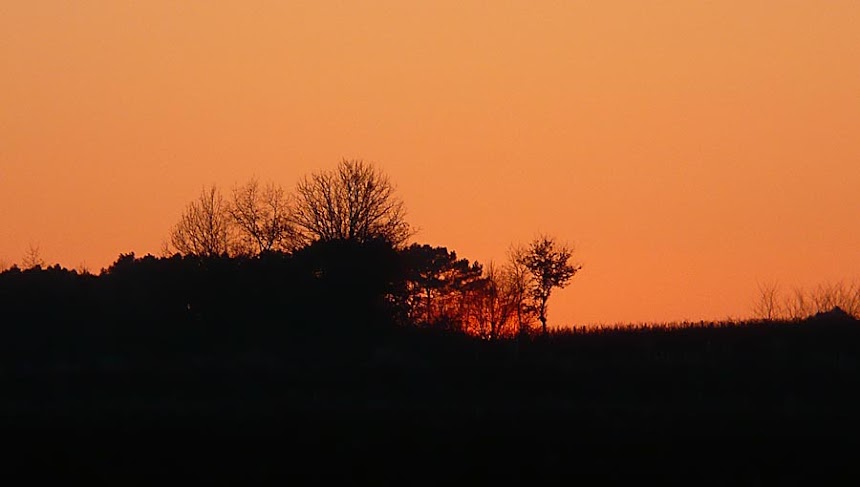 The sun was setting behind some trees
when I was out walking Callie.
Then we had our fondue. It was a great success. And guess what. When I was getting the cheese out of the fridge, I found a 100 g piece of Saint-Nectaire that we had forgotten in there for a few days. I trimmed it up, took off the crust, and put it in the fondue with the Cantal, Comté, and Gruyère. The melted cheeses were smooth and creamy. They didn't separate as they have sometimes in the past, and they didn't get stringy. It was delicious.
Posted by Ken Broadhurst at 07:52