In the spring of 2000, we decided to plan a trip to France from California for our annual vacation. A good friend, Sue, was going to make the trip with us. We decided to come to the Loire Valley and I started looking for a gîte rural — a vacation rental house — for the three of us. The most attractive one I found happened to be in Vouvray. By then I had certainly heard of the wine, but I'd never seen the village. 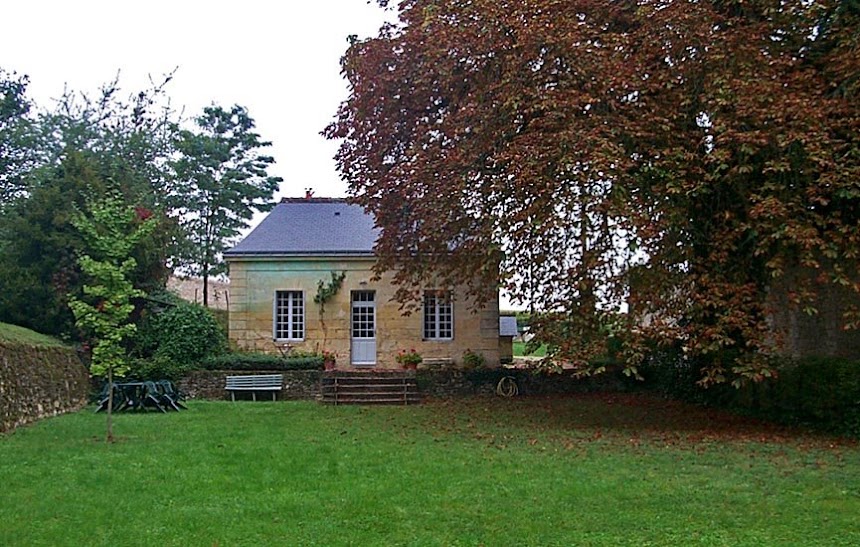 The little stone house in Vouvray that we rented
for about $300 a week — two bedrooms, nice bath
Sue was spending a lot of time reading guidebooks to prepare for the trip. She read about Vouvray in one of them, and it said in a kind of flip way that Vouvray wine was good but that the village itself was kind of plain and didn't have any big attractions in it. Sue said, now why exactly are we going there? They say it's ordinary. 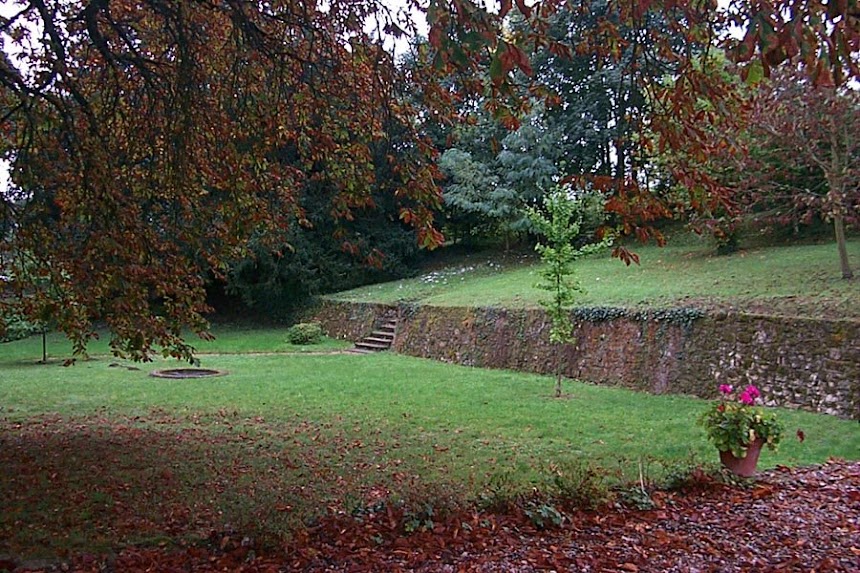 The front yard of the rental house
Well, I guess I insisted because I could tell that the rental house was really charming. And I could see from the maps that in Vouvray we would be well situated to drive around the region, from Amboise to Chenonceaux, Blois, and Chambord. We would be close enough to be able to go over to the other side of Tours to see Azay-le-Rideau, Chinon, and Langeais.

Besides, I was tired of searching the Internet for just the right place for our one-week stay. I had a full-time job back then. 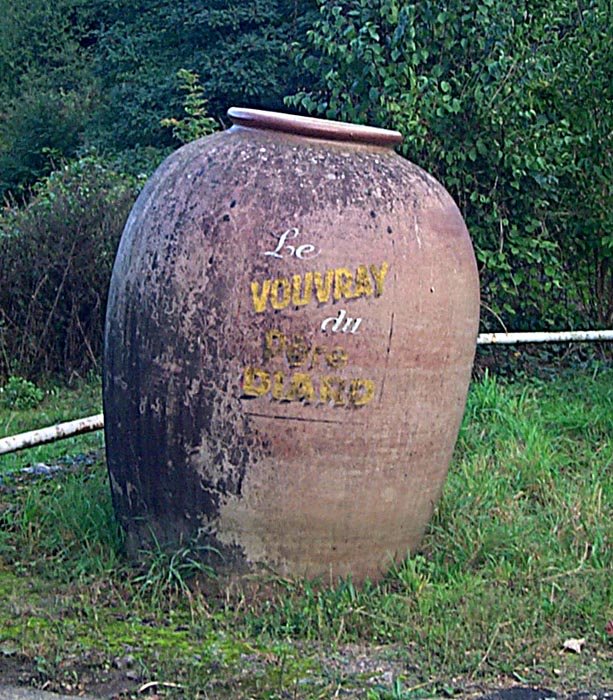 An old wine jug in the Vallée Coquette
We arrived in Vouvray in early October to start our vacation — one week in the Loire, one divided between Champagne and Normandy, and a third in Paris. The day after our arrival, a Sunday, we decided not to drive anywhere, but just to walk around the village and up through the vineyards. After traveling from San Francisco to Vouvray, we needed to keep our feet on the ground for a day.

The weather was beautiful. We went walking with our cameras and took dozens... scores..., no, hundreds of pictures in and around the village. I was using a digital camera by then and starting to develop an interest in photography for the first time in my life. 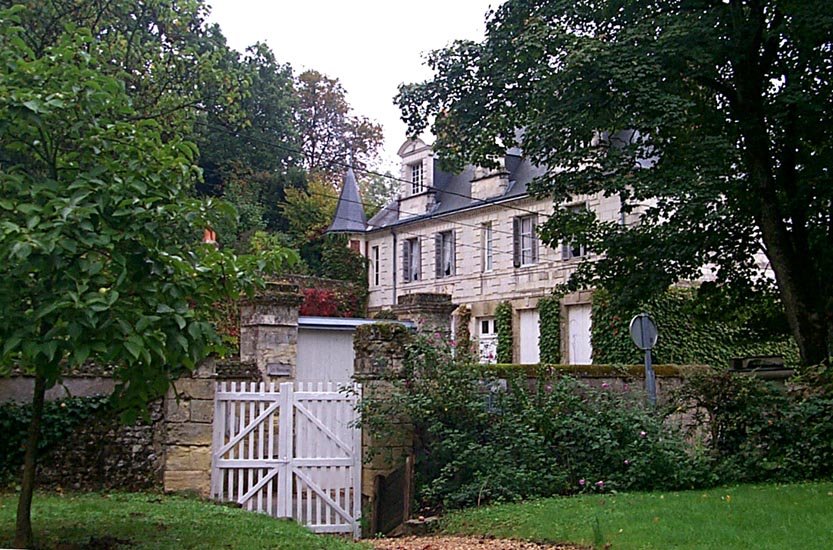 The owner's house seen from the front door of the gîte
Sue was snapping pictures of everything with her film camera. I didn't think much about it. I was used to seeing her take a lot of photos. She obviously thought it was interesting, if not beautiful. I figured that at least she wasn't disappointed with the place we, I, had chosen. We spent a very nice day around Vouvray, finding it all very picturesque. The beautiful late-summer-type weather helped, of course. 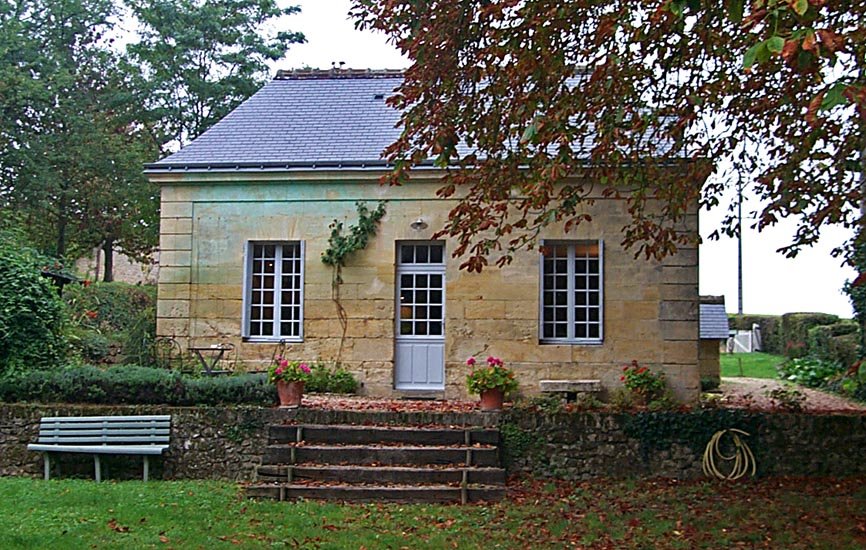 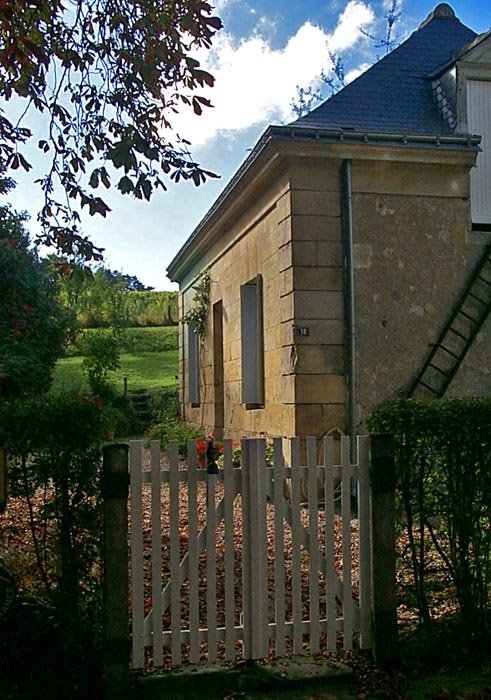 Two more views of the gîte we rented
The next day we got in the car and went to see the Château de Chenonceau. It might have been the first time for all of us. Then we went to Montrichard, where we had lunch, and in the afternoon we drove on to Fougères-sur-Bièvre, whose château CHM had recommended as interesting, and Chaumont-sur-Loire, one the main Loire attractions. It was all a lot of fun. 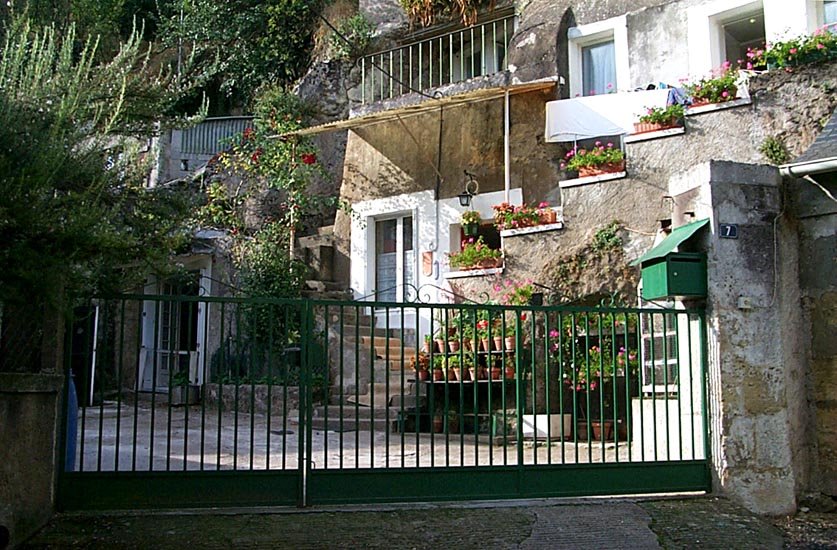 Troglodyte dwellings near the Château de Moncontour
At some point, Sue said: "Why didn't you guys tell me all these little towns were going to be at least as pretty as Vouvray? I took way too many pictures yesterday — I already used up a lot of my film, just in Vouvray." She was going to have to buy more before the trip was over.
Posted by Ken Broadhurst at 07:52