Should I buy a new VCR or try to get the old Toshiba repaired? In the end, I decided to take the old machine back to Darty, because when they repaired it several years ago they said it was a simple adjustment (un réglage). Now why a VCR would need periodic réglages beyond what you can do using the remote control and adjustment features, I don't know. I guess the machine is just a piece of... on va dire... junk.

One day back in September or early October, we drove up to Blois. We took the Toshiba VCR and stopped chez Darty. At the customer service desk, the man I talked to said I would do better to just forget it. "We charge 45 euros an hour for labor," he said. "And the repair will take at least four weeks. You might as well just buy a new VCR. It won't cost any more than the repair, and we'll be glad to sell you one. Go have a look around."

That's galling to me. I paid good money for the Toshiba (200 euros in 2003), hardly used it at all, and it went seriously out of adjustment two times, requiring intervention by a technician. 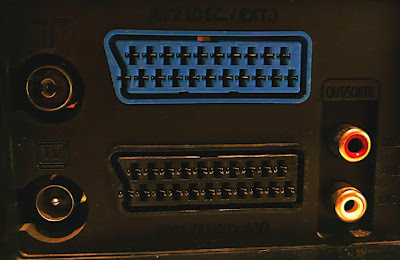 European video components — TVs, VCRs, DVD players —
use these big connectors called
SCART in English or péritel in French.
Meanwhile, the Panasonic DVD player I had bought from an online store at about the same time had also stopped working after only about two years. I gave up on that one, feeling not half lucky, and just bought a new model, a Pioneer. It has given good service for several years now.

By the way, the Philips TV we had bought chez Darty had had to be repaired too. A first attempt to repair it by a Darty technician who came to the house was unsuccessful, and the second time Darty just sent a truck and hauled the big old clunker back to Blois for repair in their shop. When it came back — just a few days later, I must say — the technician told me it was also « un simple réglage. » But it was an adjustment they had to do in the shop. Fortunately, it has continued to function perfectly since then, and that was several years ago.

I don't know about you, but that was the first time I'd had to have a TV set repaired in my life. I've had Sony, JVC, Panasonic, General Electric, and Sears models over the years. We've had several TV sets and VCRs that have given us 10, 15, or even 20 years of good service without ever needing a repair. Are these machines made for the French market that much more complex because they are designed to read not only PAL broadcasts, but SECAM and NTSC signals as well?

I left the Darty store with the defective Toshiba machine under my arm. But back in Saint-Aignan, I decided to try one more time. I looked in the yellow pages (les pages jaunes) and found a man who repairs TVs, VCRs, and other appliances in Saint-Aignan. He has a workshop in an electronics and appliance store called Expert, part of a national chain, over near SuperU. So I took the VCR to that shop.

There, a young man listened to and wrote down my description of the problem I was having with the Toshiba. He said he would hand it off to a technician who would charge 23 euros an hour for his time. Hey, that was half the Darty rate! And the boy man assured me that the technician would be able to determine in very short order whether the machine could be repaired or not. If it couldn't be repaired, he would telephone me to let me know.

That gave me the impression that there wasn't a great risk involved in leaving the VCR in their care. That was around the middle of October.

About 10 days later, I got a call from the "Expert" technician. (You will soon understand why I put that word in, as they say in England, inverted commas.) He wanted to know what exactly was wrong with the VCR. I told him that I had explained all that to the person who had taken it in, and that person had written it all down. But the technician wanted to hear it all again. So I explained once more.

Another week later, I got another phone call. The VCR was ready for pick-up. I went and retrieved it the next day. The bill was 60 euros! I was shocked. But I bit my tongue, even when the woman who seems to be in charge of the store, if not the owner, told me that the technician had done nothing more than a thorough cleaning of the machine. He hadn't been able to find any other problem with it, except that it was dirty — sale. I suspected that that was not really true, since it had hardly ever been used. And I wondered if the guy had even bothered to insert a tape to check whether the machine worked properly or not.

Sixty euros! For a cleaning! I could have bought a new VCR for not much more than that. I brought the Toshiba home, plugged it in, and put in a tape. Guess what! It worked — or didn't work — exactly as it had when I took it in for repair. There was absolutely no change in the picture on my TV screen. Had the technician done anything at all? It was a Saturday morning. I threw the Toshiba back into the car and returned to the Expert store tout de suite.

More about the video capture device tomorrow.
Posted by Ken Broadhurst at 07:49