I'm posting pictures of leftover food again. Maybe that's getting pretty desperate for material, but the food was good and the pictures are ones I took using the tripod. 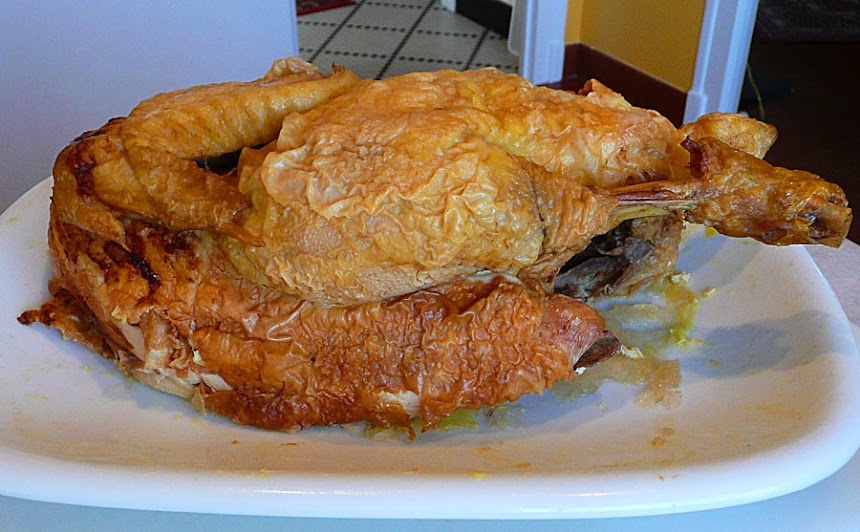 A capon poached for an hour and then browned in a hot oven
for 20 to 30 minutes. This was the leftovers the next day...

One of the things we make as dressing for Christmas birds — turkey, guinea fowl, capons — is cornbread stuffing. I don't usually stuff it into the bird though. I just cook the dressing, moistened with chicken or turkey broth, pan drippings, and some melted butter if needed, in a baking dish. 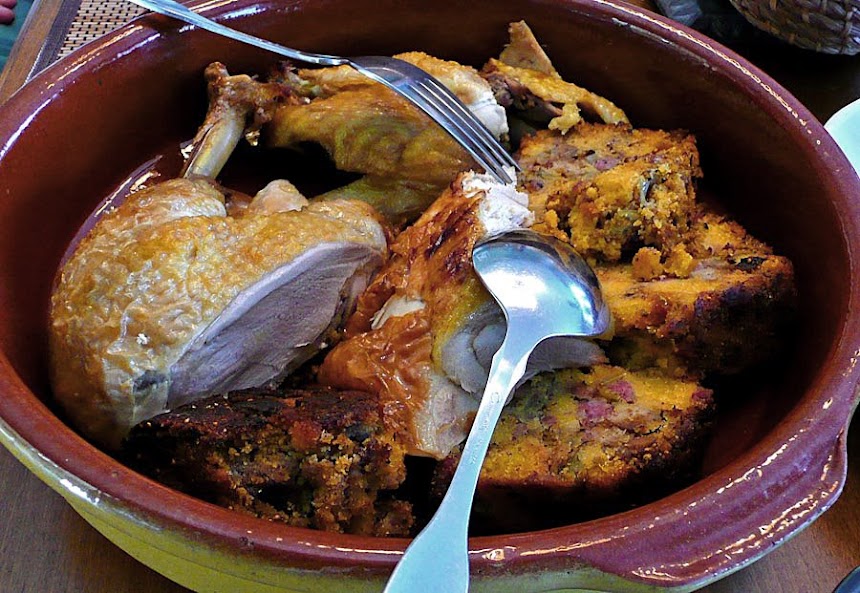 The way it looked at the table

This year the cornbread dressing was based on celery, since we had just bought a big head of céleri-branches. I think céleri-rave, celery root, would be good too. Or fennel. All give a distinctive flavor that goes well with the crumbled or cubed cornbread and the poultry. 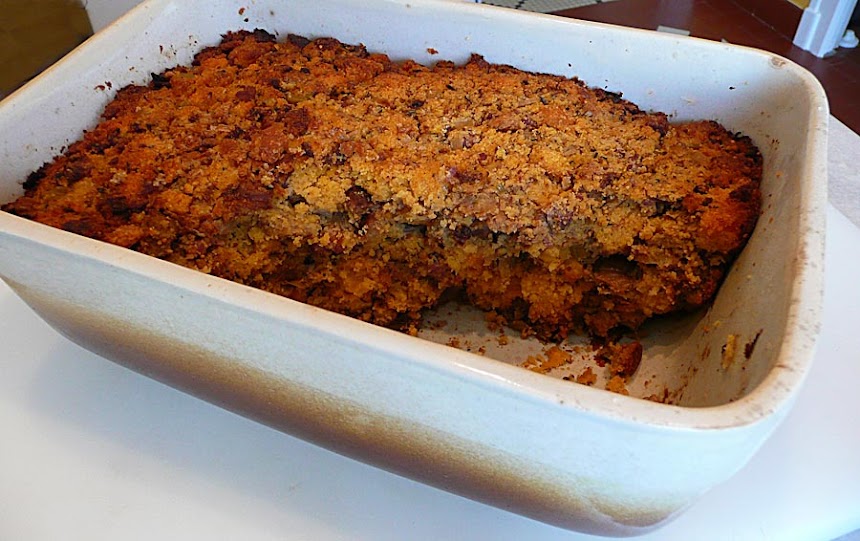 Cornbread dressing baked in the oven

I like to make the cornbread with coarsely ground cornmeal because it gives the bread and the resulting dressing a gritty texture. You don't end up with mushy dressing.

The other addition this time was some sausage meat. I used mild pork sausages, similar to saucisses de Toulouse, which are made with nothing but pork and salt. In other words, ground pork, or even ground chicken or turkey, would be good, or what we call Italian sausages.

Of course, giblets — the cooked and chopped heart, liver, and gizzard of the bird — would be really good in the dressing too, whether with or in place of the ground pork. But in France, chickens and other birds don't come with giblets, which are considered delicacies and are sold separately.

The sausages I used had herbs, probably mostly parsley, mixed in with the sausage meat. If you are using sausages, remove the casings and break the meat up into chunks. Cook it before you mix it with the cornbread cubes. Add some grain or white bread cubes or crusts if you need more bread. 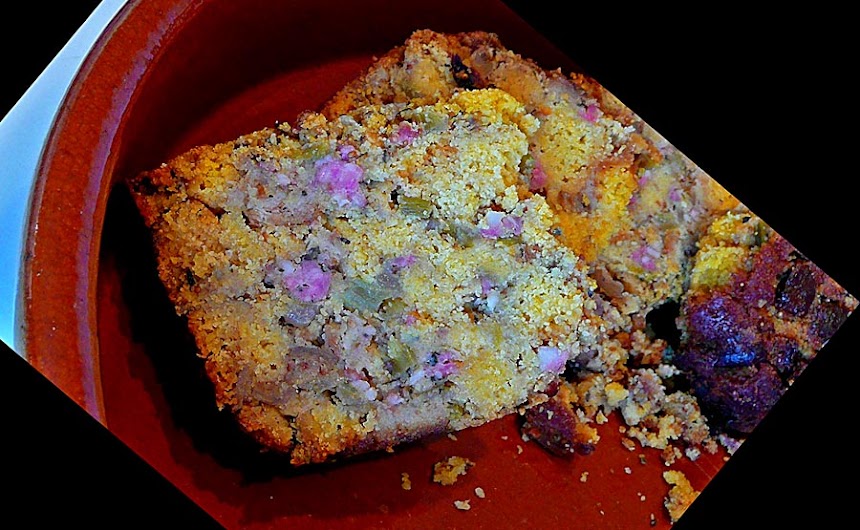 Here you can see the texture of the cornbread dressing
with celery, sausage meat, and dried figs.

Dried fruit is also good in this kind of dressing. We had dried figs, which I had rehydrated in strong hot tea. I cut some of them into chunks and mixed them in with celery, onions, cornbread cubes, and sausage meat. Raisins, prunes, dried apricots, dried cranberries, or dried cherries would be very good in it. Or chopped pecans or walnuts.

Moisten the mixture with enough broth and pan drippings from the bird, or melted butter, to make it more or less hold together. Don't wet it so much that it all melts into a sludge. Add spices, like a little curry powder, poultry seasoning, parsley, oregano, thyme, or red pepper flakes, to taste. 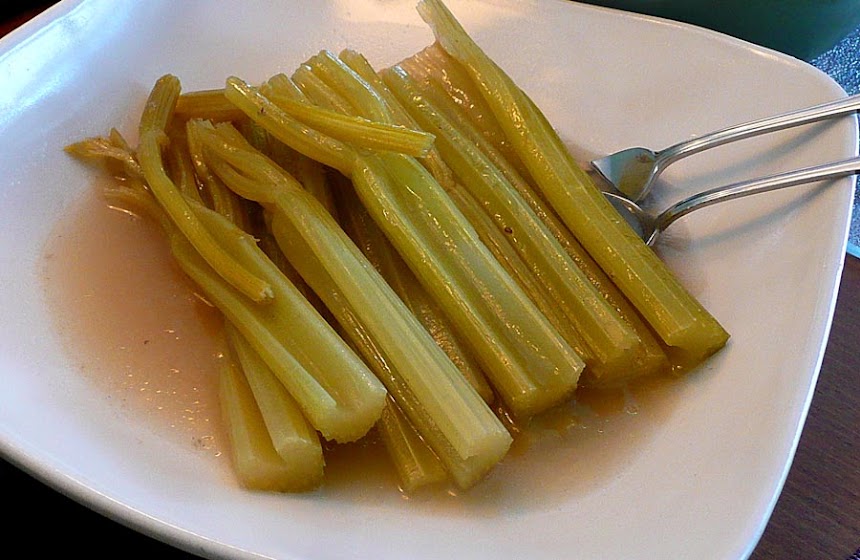 We had celery in the dressing and then
braised celery as a vegetable the next day.

This year, I didn't use eggs in the dressing, and I think the result is fine. After the mixture cooked in a medium oven for 45 minutes or so, covered at first but then uncovered so a nice crust would form on the top and the liquid would evaporate more, it was easy to cut into slices for serving.

And it was good with the capon and some gravy made with pan drippings, flour, and broth. If you first poach the poultry in water or broth, you have plenty of good broth to use in the dressing, the gravy, and then soup the next day using the leftover fowl, celery, and other vegetables or grains. And you can skim the fat off the top of the broth and put some of it on the bird to make it brown nicely in the oven, as well as use it with flour to make the roux for gravy. Nothing gets thrown out. 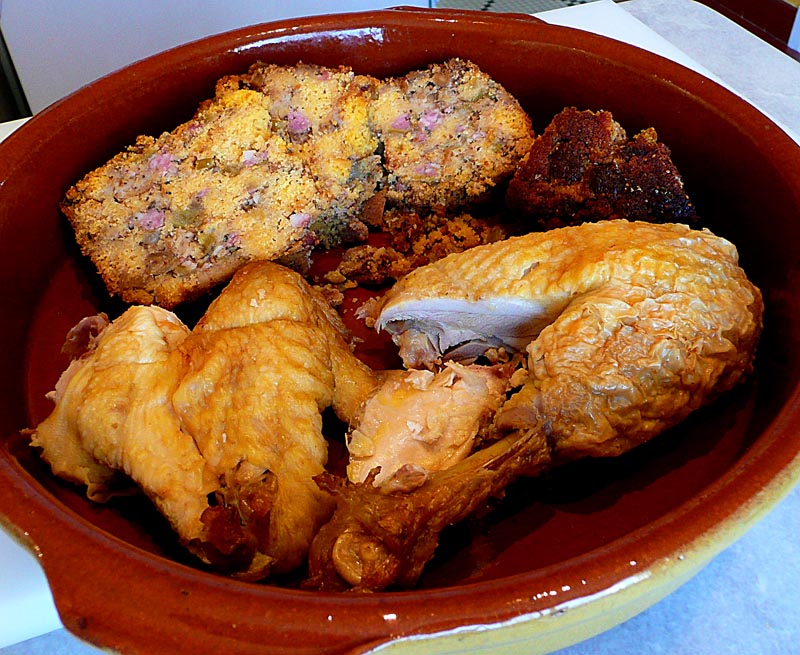 Aren't the leftovers often even better than the first meal?

Yesterday, we were invited to lunch by our friends up in Blois who own the house across the street from us here at Saint-Aignan. The menu, as I said in a comment yesterday, was nearly the same as our Christmas dinner menu, minus the cornbread stuffing. Mme M. served an appetizer of foie gras (very generous portions, I have to say) with fruit preserves as a kind of chutney, and then a roast guinea-fowl capon. With the capon she had chestnuts and shallots as a dressing, along with a big dish of green beans.

So that really is holiday food in France. It's a lot like our classic Thanksgiving turkey in the U.S., with variations as to the kind of bird you choose. Next year, we are planning to cook a goose.
Posted by Ken Broadhurst at 08:58