Entertainment where you can find it

I guess you might have figured out that I came to my senses and decided not to buy that old Renault 6 from my mechanic over in Noyers. I went back and looked at it a couple of times, but I never did ask to drive it. What stopped me was not having a place to keep the car. We have a garage, but only one car will fit in it easily. The door is too small. We could try to rearrange all the other stuff in the garage to make room for a second car and squeeze it in there, but it's not really worth it. 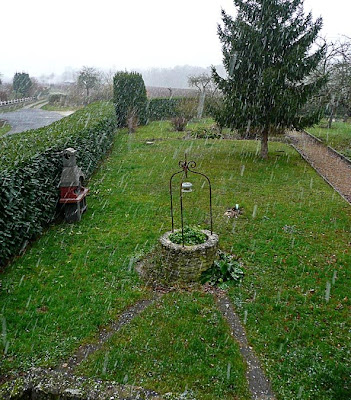 Winter weather — a snow shower earlier this week
The old Renault has one bad patch of rust on it. But if I leave it outdoors over the winter for a year or two, it will have many more. The winters are just too wet and sunless here. Last year I left the Peugeot outside a lot of the time, because it wasn't very cold in January, February, or March. And by spring I noticed green algae or moss growing on it in all the seams and indentations. I vowed that I would keep it in the garage this year, even though opening and closing the garage doors is a lot of trouble. But what else do I have to do with my time? I only go out once or twice a week, anyway.

So no old Renault will be turning into a heap of rust in our driveway. At least for now. And no old Peugeot either. The Peugeot is a nice car and I want to keep it that way. If I keep it nice long enough, it will turn into an old collector's car (the old collector being yours truly) like the Renault. 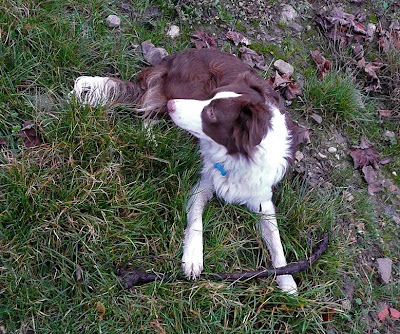 Callie in the vineyard with the stick she's taking home this time
Right now, we have enough appliances and systems acting up without asking for more trouble. Our boiler is still not working right (see Walt's topic). We get heat, but we have to operate the thing manually because the controls that regulate when the heat comes on and goes off, at at what temperature, are not functioning correctly. It's an electrical problem, maybe a bad contact in one of the dials.

The VCR we bought when we got here in 2003 was not working right back in October. I took it in for repair and adjustment and it stayed in the shop for nearly two months. Now, 60 euros later, it works again, sort of. In the kitchen, the espresso machine has sprung a leak and is not usable. I dropped the food processor bowl on the hard tile floor and broke it. 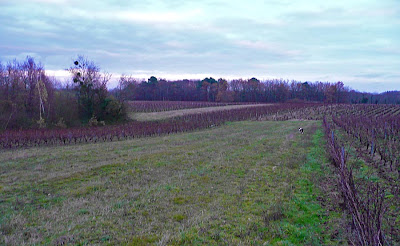 The Renaudière vineyard in winter, with dog
How much trouble can a person stand? So no Renault.

Did I ever mention how long that 15€ tank of butane that we bought for our cooking stove lasted? We bought it in mid-July and it finally ran out in early December. That's not bad — just short of 4 months — considering the amount of cooking we do. The gas cooker was a good investment, I think.

I'm writing this on Friday night and the temperature is about 30ºF (-2ºFC). We hardly made it above freezing today, despite a bright blue sky and full sunshine. The sun is so low in the southern sky at this time of year that it doesn't really heat anything up. There was still a lot of frost on the ground, especially in shady places, when I took Callie out for her afternoon walk at about 5 p.m. 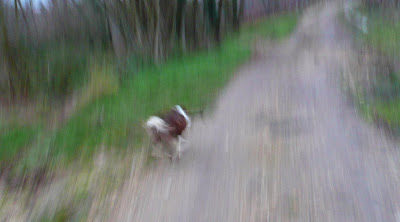 When I pretend I'm going to get Callie's stick from her,
she takes off running toward home
Tomorrow it is supposed to be cold in the morning, with clouds coming it. And we are supposed to have rain in the afternoon and evening. For a change. 2008 has been by far the rainiest year we have had in Saint-Aignan since we moved here in 2003.

Today is also Tom Lloyd's birthday. I heard from him last week. Maybe he'll read this and see my happy birthday message.

Walt's birthday is in about a week. Chery's was last Monday. Everybody I know is getting really old. 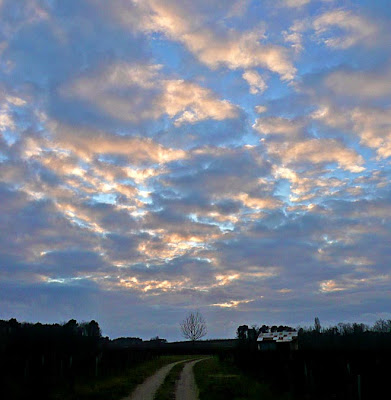 December skies
Since it's Christmas and since I realized I shouldn't by that rusty old Renault, I bought myself... er, us... a different Christmas present. It's a new 32-inch LCD television. Prices are low, the dollar is high(er), and we deserve a present. This time of year, we watch TV a lot. But it's in French most of the time, so it's good for our language skills. Often it's cooking shows on Cuisine TV, but we also watch documentaries, talk shows, news broadcasts, and movies. And DVDs. Some people say they don't watch much TV, but we'd be lying if we said that, especially in winter.

After all, there isn't much nightlife around Saint-Aignan. We've been to most of the restaurants several times, and we like to cook too much to go out to eat very often. Who wants to be out on the highways at night anyway? And in winter, we can't really be outdoors much, even in the daytime, except when we walk the dog (who insists, most days, whatever the weather).

This time of year, I really would like to be in a city — Paris, de préférence — and be distracted and entertained by the hustle and bustle of the streets, shops, and stores. Out here in the country, we have to entertain ourselves as best we can. Cooking is one of our biggest entertainments, I guess. Our pharmacist in Saint-Aignan, Mme Smith, told me this a few years ago: when you spend the winter in the countryside, il vous faut une occupation, otherwise you get bored and depressed. We have occupations, what with the dog, the kitchen, the TV, and the Internet.

Watching that old Renault rust away, now that might have been quite a hoot on gloomy winter days.

P.S. Still Friday evening. Just as I finished typing the above, the phone rang. That's quite unusual in our house. It was local friends, and Englishwoman whose partner is French, that we have known for nearly five years now. They're having a party a week from Sunday and we're invited.
Posted by Ken Broadhurst at 07:43