Breads for the holidays

Because our bread deliveries have been partially suspended by the holidays, on Wednesday we went up to the bread bakery in the vineyard — la boulangerie du Chêne du Renard ("the fox's oak bakery") in Mareuil-sur-Cher — and that's always a special treat. 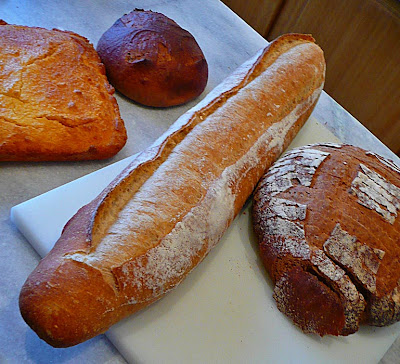 Un petit pain aux châtaignes (small chestnut-flour loaf),
une tourte de meule (round loaf of dark bread — meule = millstone),
une baguette de tradition (an old-fashioned French loaf),
et un pain de maïs (cornbread that I made using semoule
de maïs, a coarsely ground cornmeal I bought here)
The cornbread went to make stuffing for the Christmas bird, with sausage, figs, onions, celery, and herbs and spices. The big round bread was for toasting and eating with duck foie gras. Most of the baguette got eaten with the cheese fondue. And the little chestnut loaf was just because we wanted to try it. It is dense and slightly sweet — half way between bread and cake, I'd say.

Bread deliveries start up again tomorrow (Saturday). Next week, we'll get bread on Monday and Tuesday, but not on Wednesday, Thursday, or Friday. That will give us a good excuse to go back to the Chêne du Renard for some more special breads, including a loaf of rye bread to have with our oysters on New Year's Eve.

The food, including breads and cheeses, is one of the main reasons I love living in France.

Oh, here's a translation of my old fondue recipe, the one I posted a couple of days ago:

Prepare the sauce pan or fondue pot by rubbing it with 2 cloves of garlic. Set the pot containing white wine on a very hot flame or burner on the stove. Gradually add grated cheese while stirring the mixture in a figure-eight pattern.

When the cheese has all melted, add half a teaspoon of cornstarch mixed into a little kirsch (or other clear brandy). Grate in some nutmeg and grind in some black pepper. Then set the fondue pot on its stand, over a flame, at the table.

The proportion of wine to cheese is pretty complicated. Basically, you need a cup of dry white wine for every pound of cheese. And besides Comté and Emmental, other cheeses, as I've mentioned, are really good in fondue as well.