(I started this story yesterday, in this topic.)
Jean-Noël and his father moved out of the cellar doorway so we couldn't see them any more. There was an awkward silence, and then Chantal said: "That man is Jean-Noël's father." I told her I had assumed that he was.

"He has Alzheimer's disease and it's really hard right now," Chantal said. Oh, I thought. That explains the way he glared at me when I barged in the day before. Mr. Guerrior senior is 87 years old. 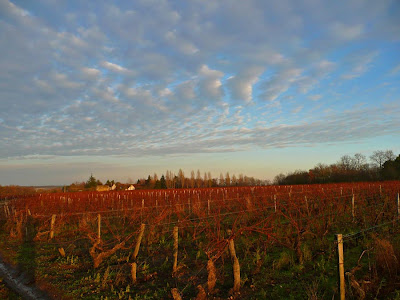 The Renaudière vineyards with the hamlet in the distance
"He lives in the house above, doesn't he?" I asked. I knew he did and I was just making conversation while we waited for Jean-Noël to come back in. « Oui, c'est ça », Chantal said.

« Et sa femme aussi ? » I continued. « Non, elle est morte en juillet. » Jean-Noël's mother passed away last July. We didn't know that. It doesn't seem like it was much longer ago than that when we last saw both couples out in the vineyard, pruning the vines. Walt talked to them one day out there, but I had only seen them from a distance. They know Callie.

Chantal said the situation was very difficult now because they have to see to all her father-in-law's meals, check to see that he hasn't turned on the stove and left a burner going or left the water running in the bathroom or kitchen, and keep tabs on the old man's whereabouts all the time. 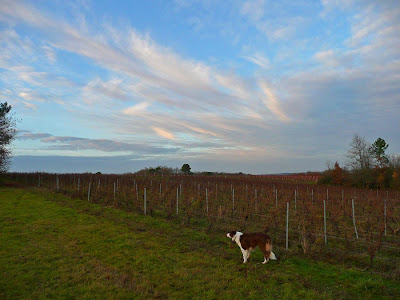 Callie in the vines on a December afternoon
Jean-Noël came back into the cellar. He heard us talking and realized Chantal had told us about his father. He said the hardest thing is that his father doesn't even know Jean-Noël as his son anymore. "He has no idea who I am, and he doesn't understand why I'm doing the work in the vineyard and cellar while he has nothing to do," Jean-Noël said. "He's my father and he doesn't recognize me now."

Jean-Noël went on to say that he had taken his father to the village cemetery a few weeks ago to show him his wife's grave. "This woman was your wife. She was my mother. I am your son," he told his father. "No you are not my son. And I've never been married. I don't know who you are or why you brought me here," the father replied.

The old man was born and grew up over in Saint-Romain, on the other side of the Cher River. Sometime in the late 1800s, the family had taken over the old farm where they work and live now. An ancestor excavated the cellar and built the house where Jean-Noël's parents ended up living. As a boy, the old man would walk down to the river, row across to the other side, and then walk up to the old family home in Saint-Romain. 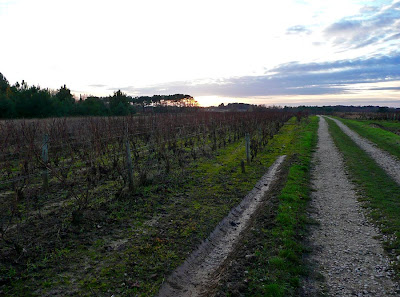 The Guerriers' Chenin Blanc grapes in winter
And that's what he keeps trying to do nowadays. A few times they have realized the old man is missing and they have found him down at the river looking for his skiff. He wants to go see his parents or grandparents. The emotion showed on Jean-Noël's face and in his eyes as he told us this story.

We realized we needed to leave and let Jean-Noël and Chantal deal with their family and business responsibilities — not to mention finish their lunch. It was getting close to 2:00 p.m. and we were hungry too. We talked a little more about the weather over the past five years and how it has affected grape-growers. It's been a hot, dry period here in the Loire Valley, but now it's turning chillier and wetter again.

2008 was the first year in a while in which the weather has allowed grape-growers to wait until late September and early October to begin harvesting. The Guerriers harvested those Chenin Blanc grapes out in the Renaudière vineyard around October 20. In 2003, the hottest recent year, all the grapes had to be harvested in late August and very early September.

I told Jean-Noël I wanted to buy 10 liters of the 2007 Côt red, and he filled my jerrycan from the big tank where the wine is stored. I asked him if we could get 6 bottles of the 2006 Côt as well — that's one I enjoyed so much last year and earlier in 2008. It's all in bottles now, so I couldn't buy any in bulk, to bottle it myself. He happily got us the 6 bottles.

I asked about rosé — the Guerriers make a rosé from a blend of Gamay and Pineau d'Aunis grapes that we like — but he said he had sold out and wouldn't have any more until next April, when the 2008 vintage is released. We'll have to wait for that, and for the 2008 Chenin Blanc. 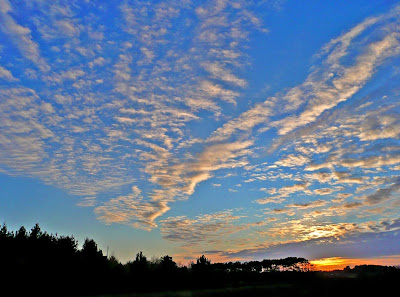 Sunset at La Renaudière, 2 December 2008
Chantal totaled up our order — she runs the business side of things, her husband said — and it came to 26.40€ for the 10 liter jug and the six bottles. That's the equivalent of 19 bottles of wine. And Jean-Noël threw in a bottle of 2005 Côt as a bonus, so that we could taste the three vintages side-by-side.

We did that comparison tasting that very afternoon, with some nice cheeses. We had leftover leg of lamb for dinner that night, and we realized just how floral and spicy the 2007 Côt is after it's been left to breathe for an hour or so. I plan to go back for more of that one.
Posted by Ken Broadhurst at 08:31