No, not eating it all, but cooking it. I started with a recipe for corn chowder that Loulou posted on her blog a couple of week ago. I recommend it. But I wanted to add some clams to it. 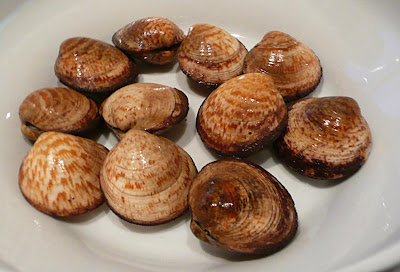 Amandes de mer — "dog cockles" in English.
At the supermarket I'd been looking at little clams called amandes de mer — "sea almonds." They are inexpensive at 2.00€ a kilogram. Other clams like palourdes or praires cost five to six times as much. For chowder, I thought the amandes would be fine.

I looked up amande de mer on the French Wikipedia site, where I read that it is a coquillage comestible — an edible shellfish — that lives in the northwest Atlantic Ocean and the Mediterranean Sea. 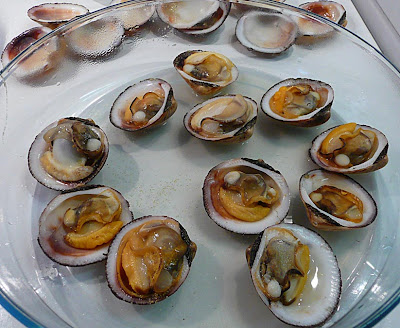 Put clams for chowder in the microwave for 2 minutes on high.
They pop right open and you can pull off the top shell.
I got the scientific name, Glycymeris glycymeris, from the French site and searched for that on the English Wikipedia site. Imagine my surprise when I read there:

The dog cockle or European bittersweet, Glycymeris glycymeris, is a species of marine clam, a coastal bivalve mollusc of European waters. It is not closely related to the common cockle. This bivalve is considered not suitable to eat by humans, because the flesh is tough after cooking, hence the common name "dog cockle", which implies that it is not valued by humans, and might only be suitable as food for dogs and similar animals.

The amande is "considered not suitable to eat by humans"! Ha! Tell that to Walt, who had a plate full of them as his appetizer in a restaurant in Dieppe, up on the English Channel, a couple of years ago. He said he remembered them as being delicious.

Clams are always tough anyway, compared to scallops or oysters. For chowder, you chop the clams finely with a knife. You can even run them through a meat grinder. You could also use cockles — des coques — I'm sure, and they are easy to find here. They're not expensive, and they are tough like clams. We had them when we went to the Ile d'Oléron last spring.

I bought only a dozen amandes because I just wanted to try them in the corn chowder. That set me back a euro. So a kilo of these clams would give you about two dozen. Here's a link to a post I did about a fish monger's shop in Paris, with photos of coques, praires, palourdes, and other shellfish, fin fish, and crustaceans. 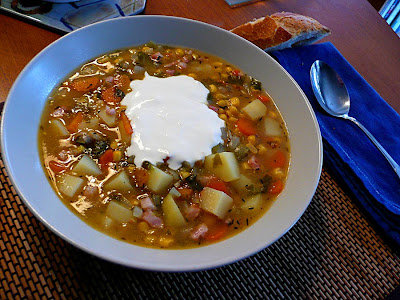 Serve the chowder with cream if you want. You can also add cream
directly to the pot, but if you serve it at the table it can be optional
and you can see how much you are putting in.
To make the soup, first you cook the bacon or lardons in a big pot to render their fat. Meanwhile, chop the clams and a couple of onions. Cook the clams and onions for 20 to 30 minutes on low in the bacon fat. Add some grated carrots if you want. Season with pepper, celery, thyme, and bay leaves.

Pour 5 or 6 cups of chicken broth or water over the cooked clams, onions, and carrots. Put in half a dozen potatoes, cubed, and a couple of cups of corn. If you want to thicken the soup, grate a raw potato directly into the pot. Or make a slurry of cornmeal and cold water and slowly pour that into the hot soup while stirring it. Then let the soup cook for 30 to 45 minutes on low. Add the bacon in at the end and serve with cream if you want it. 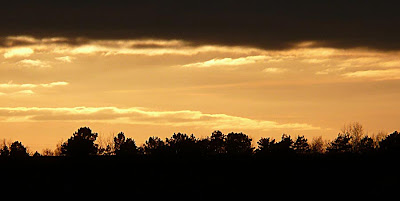 Winter skies at Saint-Aignan
After a good bowl of chowder, I was fortified for my afternoon walk with the dog. Actually, it's not very cold right now, and it's been fairly dry for a week or so.
Posted by Ken Broadhurst at 07:40