The title of my blog leaves me a lot of latitude to write about anything and everything that is going on here in Saint-Aignan. So let me tell you the story of my VCR — mon magnétoscope, in French.

Maybe you don't know that U.S. and European television signals do not at all conform to the same standards. That means that you can't bring an American TV set or video cassette recorder to France and expect it to work, even if you have a transformer to step the electric current down from Europe's 220 volts to America's 110 volts. The U.S. set won't receive French TV signals correctly, and neither will the VCR. 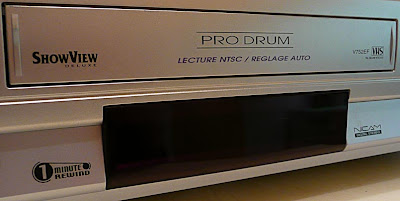 In the U.S. (and Canada and Japan), televisions receive broadcasts in the NTSC standard, while in most of Europe it's PAL — with France and some other countries using a system called SECAM. Luckily, NTSC video cassettes and DVDs are common enough in Europe that most manufacturers build into their TVs, VCRs, and DVD players the ability to at least read NTSC tapes or discs. So if you make your purchases carefully, you'll end up with machines on which you can play media that you recorded or purchased in the U.S. or Canada.

When we left California, we left all our TVs and VCRs and DVD players behind. We sold some of them, and we gave others to friends and relatives. We had collected quite a bit of such equipment over nearly 20 years of life together.

After arrival in France, we went almost immediately to one of the big chain electronics and appliance stores, Darty, and bought everything we needed to set up housekeeping in Saint-Aignan. That included a television set, a video cassette recorder, and a DVD player. Actually, we bought two TV sets, but never mind.

The first VCR I bought was a Philips model. And the first time I put a cassette in it and started it up, it promptly mangled the tape, which was ruined. I was not happy. At the next opportunity, I drove back up to the Darty store, which is 45 minutes away in Blois, and expressed my discontent. The people at the store understood my complaint and immediately offered me a new machine to replace the original one. 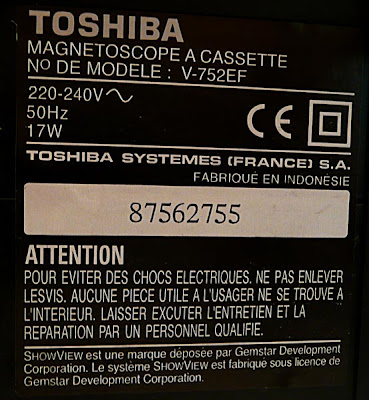 I told them I didn't want another Philips model. They offered me a Toshiba VCR for the same price. I took it. And it worked just fine for nearly two years. We didn't use it much, but it was good to have it. Soon after moving here, we signed up for a satellite TV service and acquired a decoder box with a built-in hard disk for recording and delayed playback of shows and films we were interested in watching.

After two years, just before the warranty expired, the Toshiba VCR went on the fritz. I took it back to Darty and they successfully repaired it in just a few days' time. They said it was a simple adjustment. The machine worked for the next 2 or 2½ years. We hardly used it at all. I did record three or four cassettes during that time. Then the same problem came back. When I played a cassette, there was a distracting white band of static across the bottom of the TV screen
that I couldn't get to go away using the machine's tracking adjustment feature.

It didn't matter. As I said, we hardly used the VCR at all anyway.

That was the situation until one day not too long ago, when I realized that we had about 65 video cassettes on a shelf down in the garage that we might as well get rid of. They were gathering dust and slowly deteriorating. Among them are some recordings that CHM made with his video camera (son caméscope) years ago. We had copied them onto VHS cassettes so that we could have a copy.

One was a video record of a day we spent together in the Napa Valley in California. Another was video of a party attended by a lot of nice people that CHM and I worked with in Washington DC many years ago. I didn't want to lose those. 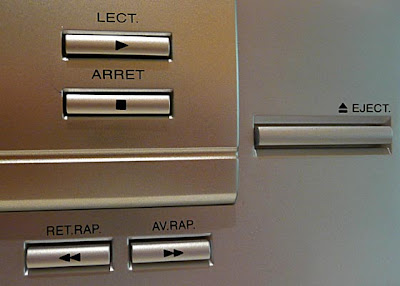 And then there were tapes our friend Sue made with her camera in California. There were Christmases we spent together, and videos of our house in San Francisco. They and others were cassettes that I really wanted to transfer onto DVD so that we'd be able to look at them from time to time. They are part of our history together and with close friends.

So I did some research and bought a gizmo that I can plug into a port on the back of the VCR or TV set and, at the other end, into a USB port on my computer. Voilà! Now I could make my own DVDs. But here I was with a VCR that didn't work right and was no longer under warranty.