I just looked at Walt's blog and it seems like we are overlapping a little bit. I am going to blog about the weather too.

Walt told me the other day that we have had more rain in 2008 than in any year since we starting keeping records in 2004. And that doesn't even count December, because it just started. 2007 seemed very wet, but 2008 has outdone it. So I guess we are still emerging from the recent 5-year drought. 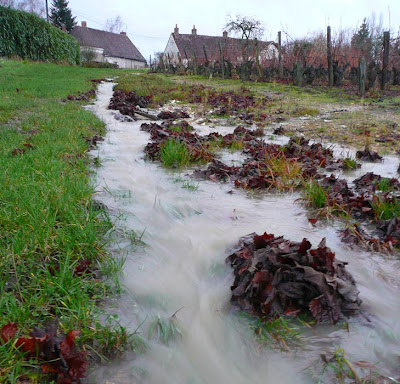 The road becomes a veritable river.
I am convinced weather goes in cycles and that the big changes you see will soon be reversed, at least partially. But you can never predict how long a dry or rainy cycle will last. We had beautiful summers in 2003, '04, '05, and '06. We also had a couple of cold winters. Now we have had mediocre summers for two years running, but mild winters. Lots of rain but no snow. When winter turns cold, I'll assume that warm dry summers won't be far behind.

Anyway, we got about an inch of rain — something over 23 mm — just yesterday. I went out in the morning and nearly got soaked just getting from the car into SuperU. It was windy too. And then in the afternoon the rain came down even harder. It stopped just before dark and I was able to go for a short walk with the dog.

Out behind our back gate there's a road or tractor path that is, I think, a public right of way. But it isn't a gravel road — it's grown over with grass. And a gully is forming because of heavy runoff from the vineyard and the overflow from the pond back there, with all this rain in November and now December. 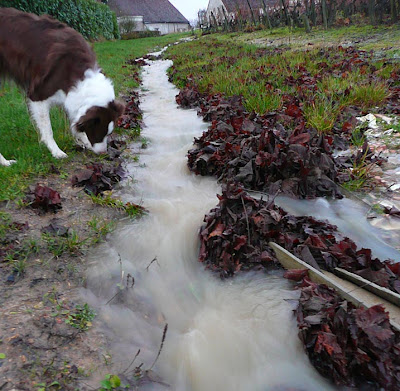 Border collies are not classified as water dogs,
but Callie loves puddles and streams.
The people who work in the vineyards spread small loads of pebbles, gravel, and broken-up tile and bricks out on that "road" — which is obviously a stream in the making — to keep it from eroding too badly. I do the same thing. I'm not sure how well it's working.

The water table does need replenishing, local people assure me. Well, it is being replenished. A lot of the water runs off, ends up in little streams, and dumps into the Cher River. We live between two such streams that run through deep ravines. But a lot of the rainwater also soaks into the squishy, mucky, sucky ground. The soil is clay here, with flint mixed in, so it really sucks at your shoes when you walk on it.

We are still waiting for cold weather. It's only gone down below freezing once or twice, and then just barely. Bring on the frost! Rain, rain go away.
Posted by Ken Broadhurst at 09:27