On Betty C.'s blog called Cuisine Quotidienne (Everyday French Cuisine), she posted a topic on beets (Am. Eng.) or beetroot (Br. Eng.) — betteraves in French. Betteraves are a controversial vegetable; some people detest them. Others, including me, love them. They taste like dirt — or should I say "the earth"? — like some good wines, and that's one of the things I like about them.

On Betty's blog, I left a comment about the way beets are sold at our local Intermarché supermarket. Over there, there is always a crate of them, of some sort. They are cooked. I sneaked a photo at Intermarché this morning to show how they were displayed. Today, instead of a meat fork, there was a set of tongs provided for customers to pick them out of the crate and drop them into a plastic bag. 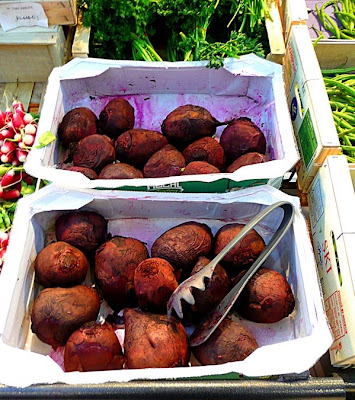 Cooked beets at Intermarché in Noyers-sur-Cher.
Grab one with the tongs and drop it into a plastic bag.
Betteraves are normally sold cooked in France, though there is a farmer who sells raw beets at the market on Saturdays in Saint-Aignan. In California, I had to buy them raw at the supermarket and cook them myself. They take a long time to cook — 45 minutes or an hour or more — whether in boiling water or wrapped in foil in the oven, so the fact is I prefer to buy them already cooked.

I like cooked beets cut into cubes and made into a salad seasoned with a vinaigrette dressing and some minced shallots. Vinaigrette is a mixture of a little Dijon mustard and vinegar whisked together with about three times as much oil. Add a minced shallot, maybe some chopped parsley, some salt and pepper, and there — Bob's your uncle. Toss the cubed beets in it.

Betty gives a lot of other ideas for beet salads on her blog, and there are still others in the comments. They all sound good. 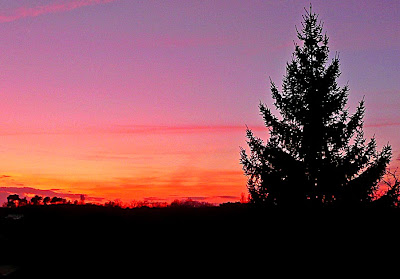 Sunset at La Renaudière, 19 December 2008
Here's a gratuitous snapshot of last night's sunset. We actually had a sunny day in Saint-Aignan. And warm — over 50ºF — that's over 10ºC.
Posted by Ken Broadhurst at 07:49