Lunch in Saint-Aignan at the Crêpiot

Yesterday we decided to go have lunch in one of Saint-Aignan's real institutions, Le Crêpiot. It's a small family-run restaurant on the town's main street, just across the street from the post office, and it has been in business since 1979. Here's the Crêpiot's web site. 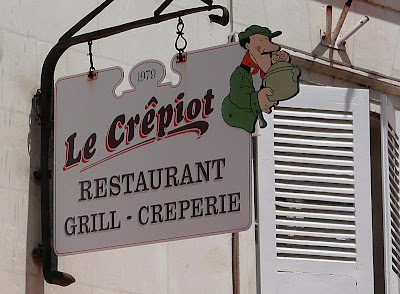 The restaurant's sign hangs out over
Saint-Aignan's narrow, cobblestoned main street
In summer, the Crêpiot puts out a wooden deck with an awning over it and sets up tables for seating outside. It can be very pleasant, even though the cars rumble by right next to diners on the cobblestone street. The interior is — well, it's in the pictures below. It's rustic. We decided to eat inside because for mid-June, there was a slight chill in the air — le fond de l'air était frais. 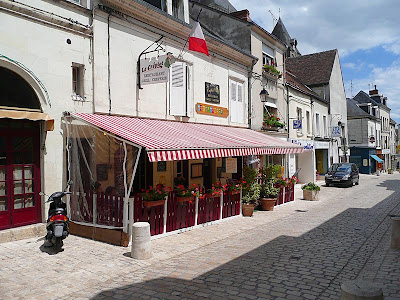 The Crêpiot's summertime terrace,
which is taken down at the end of the season
The owners of the restaurant are Elie and Véronique, and they make it a point to welcome all their customers with a handshake and a big smile. Elie spends his time at the bar in one corner of the small room, and Véronique explains the menu and takes orders. She speaks very clearly and slowly in French. I used to think she spoke extra-slowly to foreigners, but CHM said he had the impression she talked that way to all her customers. She's easy to understand and she takes time to make sure everything about the menu choices is clear. 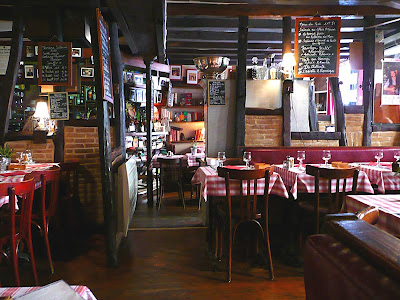 The typically rustic décor at the Crêpiot
Speaking of the menus, there's a daily special at lunchtime for about 12 euros. Yesterday the main course was a grilled slice of ham served with white beans. As a starter, there was a salad with warm goat cheese, a salad with strips of chicken breast, or a half an avocado stuffed with tuna salad. The desserts were tarte aux pommes (apple tart), a "floating island," or two scoops of ice cream (several flavors available). Instead of dessert, you could choose to have the cheese plate, with pieces of two different cheeses.

We decided to have the €16 menu instead, because we wanted steaks. As an entrée, CHM had a salad with Sainte-Maure-de-Touraine goat cheese. There were four big pieces of cheese on the plate with salad greens and chopped walnuts. Walt had a herring salad — two or three fairly large pieces of fish served with sliced boiled potatoes, onions, and salad greens in vinaigrette. I had the half-avocado stuffed with tuna salad. 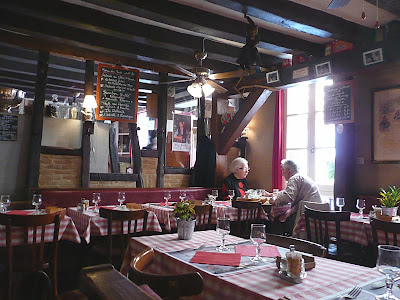 We arrived early and were among the first noontime customers.
The gentleman in this picture was evidently celebrating his
birthday, and Véronique and her wait staff went over and sang
Bon Anniversaire to him when they served the couple's desserts.
Our main dishes were steaks called bavette d'aloyau, which is a sort of flank or skirt steak. It's lean mean with no fat or gristle. We all ordered the steak cooked rare (saignant). Walt and I got frites — French fries — with ours, and CHM decided to substitute sautéed mushrooms for a supplement of one euro. I thought the steak was perfectly cooked and tender (French beef is from grass-fed cattle and therefore very different from American beef). It was served with a pat of parsley butter that melted on top of and flavored the meat. CHM had such a big portion of mushrooms that he couldn't eat them all, but Walt and I both finished our fries.

Our desserts were a crêpe with warm chocolate sauce and vanilla ice cream for CHM, a piece of apple tart for Walt, and a floating island for me. Do you know what an île flottante is? It's blobs of soft meringue sitting in a light crème anglaise — an egg custard — with toasted sliced almonds on top. 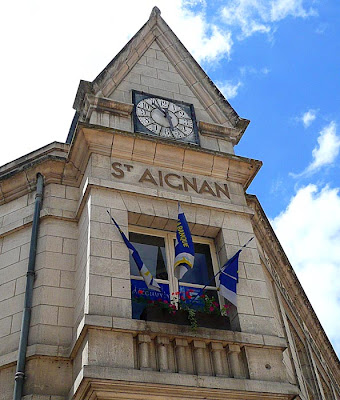 Saint-Aignan's post office is
just across the street a few doors up
I completely forgot to take pictures of the food. I was too busy anticipating and then eating. Oh, and now I almost forgot this detail: the Crêpiot features a locally made wine every month as its vin du mois. This month it is a Cabernet Franc and Côt (aka Malbec) blend made and bottled by a couple over in the village of Couffy, about three miles east of Saint-Aignan. It was tasty.

A number of you who regularly read this blog have had a meal or two at the Crêpiot. I'm thinking of Evelyn, Marie, Luke, BettyAnn, Danielle, John, Candy, Cheryl, and others (it's hard to remember who has eaten where on various visits). The Crêpiot is one of Saint-Aignan's mainstays.
Posted by Ken Broadhurst at 05:25