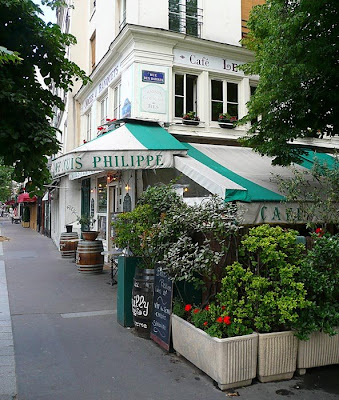 Address: 66, Quai de l'Hôtel de Ville, 75004 Paris
Why is it that some Paris restaurants get on the American tourist circuit while other equally good or even better ones are completely ignored? It's a mystery. One such ignored restaurant is the Café Louis-Philippe in the Marais, right on the Seine across from the Ile Saint-Louis. 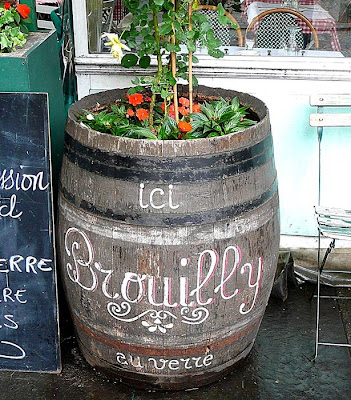 A rustic décor
We looked in all the usual American sources for a review of the Louis-Philippe — the Access guide for Paris, Zagat's, and so on — and we found nothing. We did find it on some French restaurant sites, with mixed reviews.

I've walked by the Louis-Philippe many, many times over the past 15 years, but I'd never managed to go in for a meal. There are so many restaurants in Paris that it's impossible to know or try them all. But my friend Cheryl had eaten at the Louis-Philippe a few years ago and had enjoyed it. We decided to try it last Tuesday for lunch. 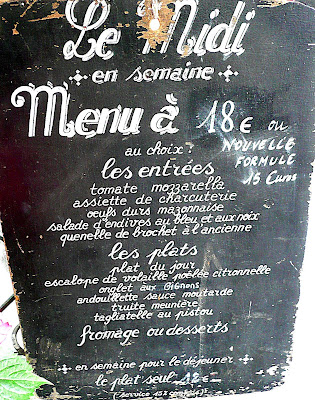 The 18€ menu on Monday 2 June 2008
It was the best restaurant experience I've had in a long time. It was even better than the Trumilou with its delicious canard aux pruneaux (the Trumilou is just up the street). And I must say that I had a good restaurant meal a couple of weeks ago at Le Crêpiot in Saint-Aignan, but here I'm talking about Paris. I really don't go out to eat that often these days, in fact. 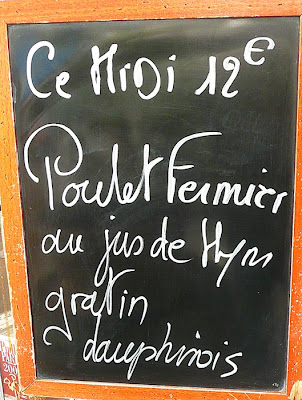 The daily special was chicken roasted with thyme
served with au gratin potatoes
Cheryl and I sat outside on the covered terrace at the Louis-Philippe, which is right at the end of the bridge with the same name that links the "continent" and the Ile Saint-Louis. The weather wasn't great, but the terrace is completely protected from the wind, so it was pleasant.

One of the criticisms I read of the Louis-Philippe is that the service can be erratic and sometimes surly. We didn't experience that. The women waiting on the tables were busy and sometimes were forgetful or distracted, but they didn't leave us sitting with nothing to eat or drink for long periods. They were very friendly and had a good sense of humor. 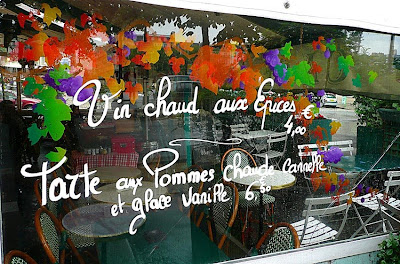 Mulled wine and warm apple pie with cinnamon
and vanilla ice cream were two other specials
We spent three hours enjoying a three-course lunch: starters, main dishes, and cheese. And wine, of course. Then we had coffee but no dessert. The owner gave us each a glass of calvados (apple brandy from Normandy) on the house at the end of the meal.

More about the food tomorrow.
Posted by Ken Broadhurst at 09:29