Le château de la Ferté-Saint-Aubin
Click the mouse on the pictures to enlarge them
Wednesday June 4. It rained a few drops here and there as we drove south from Milly-la-Forêt after lunch in a café. We didn't stop to see much along the way because we both wanted the trip to be over as fast as possible. 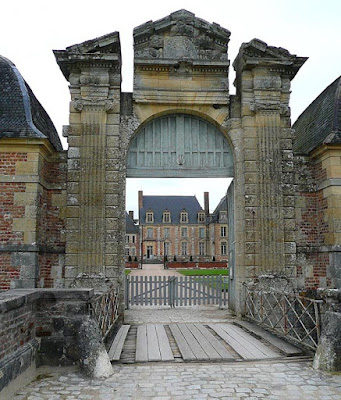 But we did stop in the town called la Ferté-Saint-Aubin, just south of Orléans in the Sologne region. There's a château there that the Michelin Green Guide calls « un superbe château classique ». 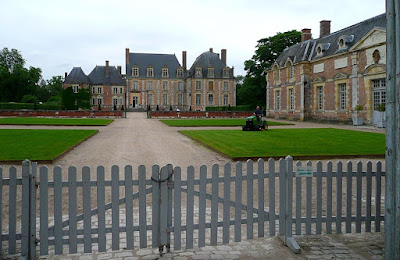 This is another place I have driven by a dozen or more times but where I had never stopped before. We didn't go in; we just took some pictures from out front and from up at the main entrance. 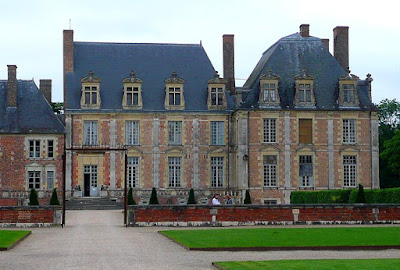 The buildings were built in the 1600s and 1700s of stone and pale-colored brick. Some of the rooms are still furnished with their original 18th-century furniture, according to the Michelin Guide. The château's moats are fed by the Cosson river, which also flows past the imposing Château de Chambord just a few miles downstream.

Unfortunately, a big national highway runs right through the middle of La Ferté-Saint-Aubin, so traffic on the town's narrow main street can be terrible. Ferté, by the way, means "a fortified place," and there are a lot of towns in the Sologne region and up north on the edge of Normandy and the Paris area that are named that way: La Ferté-Imbault, La Ferté-Macé, La Ferté-Allais, and so on. The Michelin road atlas lists about 25 of them.
Posted by Ken Broadhurst at 08:00