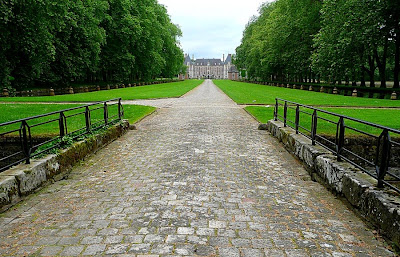 A imposing entrance at Courances
Last Wednesday when I was driving back from Paris with CHM, who is visiting for a couple of weeks, we decided to stop and have a look at a château not far from Paris in the village of Courances. 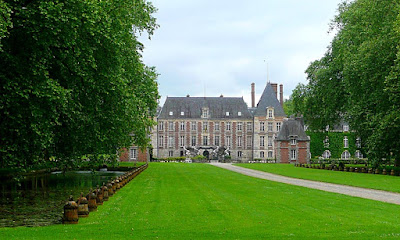 Green lawns and tree-shaded canals
I took my favorite route as I drove out of Paris: down the autoroute almost to Fontainebleau, turned off on little roads just before the first tollbooth, and drove past Courances to Milly-la-Forêt and then on south. I've driven by Courances a dozen or more times over the past five years but had never driven into the village before. 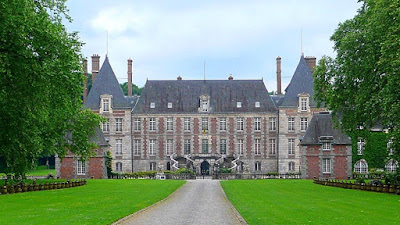 Le Château de Courances, near Fontainebleau
The château de Courances was built in the mid-1500s for King Henri II's secretary of finances. It was then significantly modified in the early 1600s, during the reign of King Louis XIII. Think Place des Vosges in Paris, built during that same period: brick exterior walls, sandstone window framing, and steep rooftops. In the 1800s, a Fontainebleau-style horseshoe staircase was added on to the front of the building. 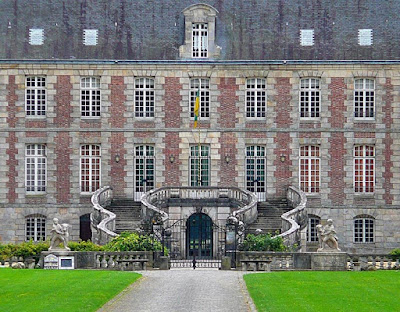 The horseshoe-shaped staircase
imitates the one at Fontainebleau
We didn't take the time to go into the château, which is open to visitors. One of the main attractions at Courances is the château grounds and gardens. There's a water-filled moat as well as several canal-like water features, and at this season everything there is emerald green and lush. 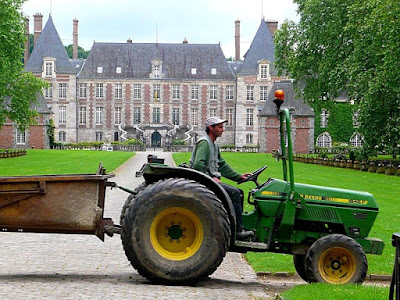 Keeping the park beautiful at Courances
The Michelin Green Guide says that Courances is one of the most "seductive" châteaux in the Paris region. There was a herd of cattle grazing in a field just across the road when we were there. 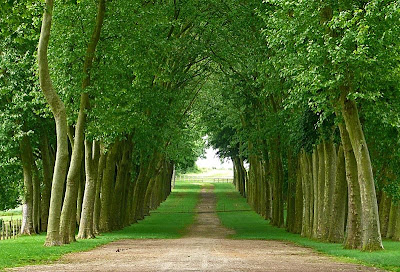 Rows of trees line the alleyways at Courances.
Posted by Ken Broadhurst at 07:29