L'Eglise St-Gervais-St-Protais in the Marais 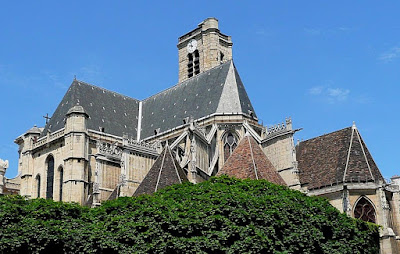 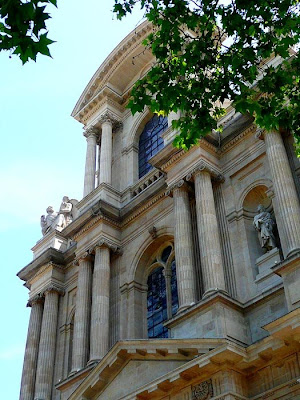 ...behind a classical façade
On the way to the Trumilou restaurant with Cheryl on June 2 (can it have been that long ago already?) we walked past the St-Gervais church on the edge of the Marais neighborhood — just as I have done so many dozens of times over the years. It's official name is l'Eglise St-Gervais-St-Protais, and it's in the same neighborhood as the Trumilou restaurant and the Café Louis-Philippe. 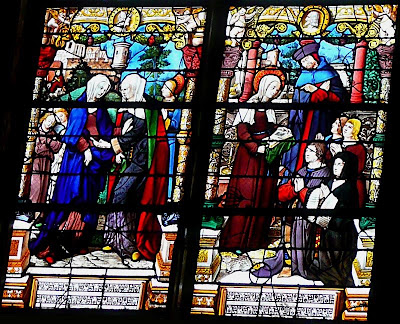 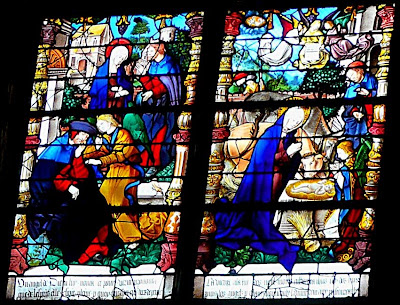 Stained glass windows in the Eglise St-Gervais-St-Protais
The Michelin Green Guide says that Gervais and Protais were brothers and Roman military officers who were martyred during the reign of the emperor Nero. As early as the 6th century, there was a basilica on this same site dedicated to the two sainted brothers. 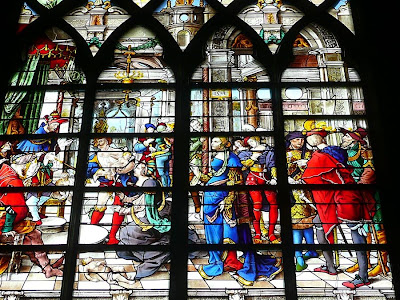 The windows were refurbished in the 1800s
and again over the past ten years by the city of Paris
The window pictured just above is called The Wisdom of Solomon. It shows figures dressed in French Renaissance style and in a Renaissance-style palace. The poses and gestures of the figures are remarkable, as is the detail of their costumes, and this window is an example of technical virtuosity for its time (early 1500s, Flemish school). That's what I read on this site in French.

The current St-Gervais church was built in flamboyant gothic style beginning in 1494 and was completed in 1657. The church's façade is in the French classical style and was built between 1616 and 1621. Some like it, and some don't. In 1918, a German mortar shell hit the church and caused major damage, killing more than 100 people inside. The church was repaired, then, in the 20th century. It is home to a monastic community even now. 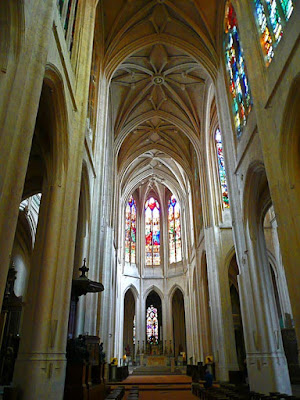 Tall vaulting at St-Gervais-St-Protais
Some of the stained glass windows in the church, dating back to the 1500s, survived the WWI bombing incident, as did the church organ and some of the old carved stone and arches. The organ is in fact the oldest church organ in Paris, and the church has played a big role in the history of French music. 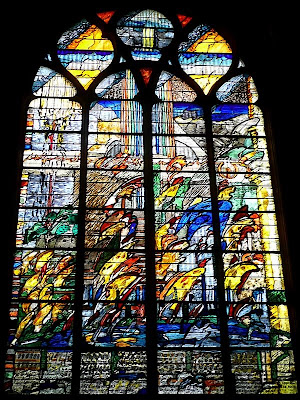 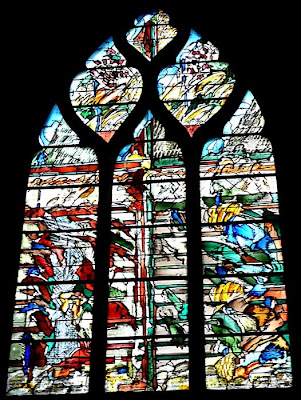 Some of the more contemporary windows at St-Gervais
The pictures in this entry include some parts of the old stained-glass windows and some windows that were obviously done as part of the 20th-century repairs to the building. The old windows feature bright panels in primary colors, red and blue, especially, whereas the newer ones use more muted, earthtone colors and abstract forms.

Be careful what you visit, because the Cadogan Guide to Paris says the Eglise St-Gervais-St-Protais isn't even worth going into. I wonder if the guidebook writers saw the same church I saw.
Posted by Ken Broadhurst at 09:36