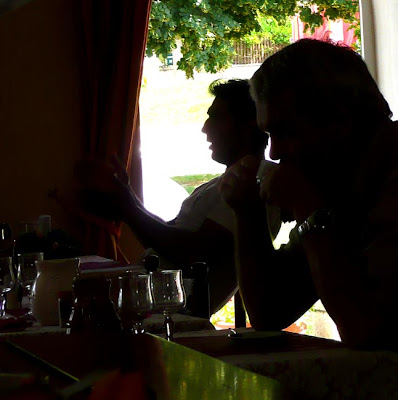 It was warm and the front door of the restaurant
stayed open while we were there.
Yesterday, at the invitation of CHM, we had lunch over in Noyers-sur-Cher at the Grill des Nouettes, which is the place I call the truckstop. One friend described the décor as more like an American Midwest church supper hall, and I think she is right. But his is definitely a truckstop: it has the Relais Routiers sign displayed prominently out front on the road. 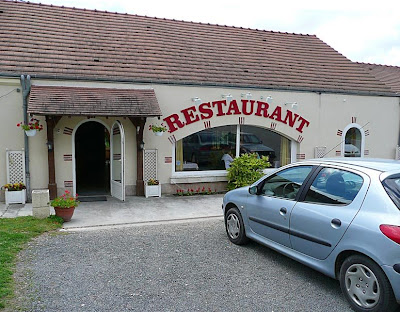 Le Grill des Nouettes in Noyers-sur-Cher
Yesterday there were several big rigs, some cars, and quite a few white vans (little ones and bigger ones) parked on the gravel lot out in front of the restaurant. It was 12:15. We went in and there were a dozen or more guys in t-shirts, jeans, and other workclothes-type outfits in the bar, having their apéritif I guess, and another dozen or so sitting at tables in the restaurant. There was one woman we could see — a 60-something woman having lunch in a corner with, presumably, her husband. 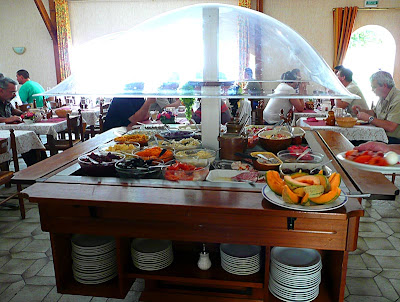 The salad bar at the truckstop
What's the food like? First of all, at noon there's a fixed-price menu for 11 euros. For that price, there's an hors-d'oeuvres buffet (all you can eat) featuring standard French salads of carrots, beetroots, and grated celery root as well as mussels, salami, local rillons, cantaloupe, hard-boiled eggs, and so on. It's quite a spread. 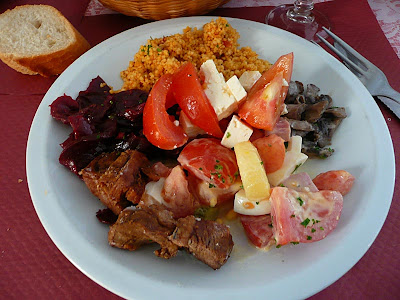 Beets, tomatoes & mozarella, mushrooms à la crème,
taboulé, and rillons
There are two main courses that change daily. The constant is that one choice is always meat or fowl and the other is fish. Yesterday, the two choices were (1) a brochette or shish-kebab or (2) a truite aux amandes, a whole pan-roasted trout served with slivered almonds. 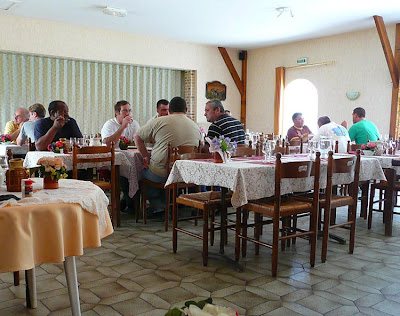 The room. I think we counted three women
among many dozens of men.
We asked what the brochette was. Lamb? No, beef, the waitress said. Beef and kidneys, actually. Presumably veal kidneys. We all ordered that and then went to the salad bar for our appetizers.

Kidneys for lunch twice in one week. That's a record. Especially since Walt had only eaten kidneys once before in his life, and I hadn't eaten kidneys many times over the past 10 years (I do remember having then at Astier in Paris in 2006). The brochette was big chunks of meat served in a thick brown sauce that had plenty of Dijon mustard in it. That made it very tasty. The meat was cooked rare, and the beef and the kidneys were tender. The accompanying noodles were just so-so. 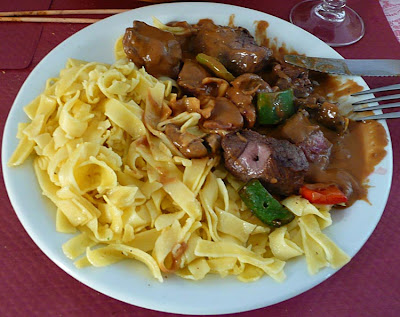 Beef and kidneys in a brown sauce with noodles
The third course at the truckstop is cheese, which is served without ceremony. A platter with half-a-dozen cheeses is passed around from table to table by the waitresses. When one piece of cheese has been eaten up, another is added to the plate. As you can see from my photo, the cheeses are varied, going from Swiss-type cow's-milk cheeses to brie to blue to goat's-milk cheese. The plate is left on your table and you take what you want. 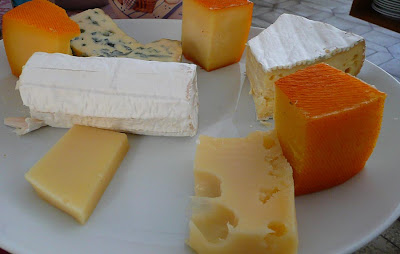 The truckstop cheese platter
As for wine, it's included in the price of the lunch. The waitress brings a 50 cl carafe of local red wine to the table when she comes to take your order. That's the equivalent of two-thirds of a bottle, and it doesn't matter if you are one person or four at the table, that's what you get. But wait: you can get more. You just tell the waitress you need more wine, and she brings it. No extra charge. You also get a carafe of tap water. 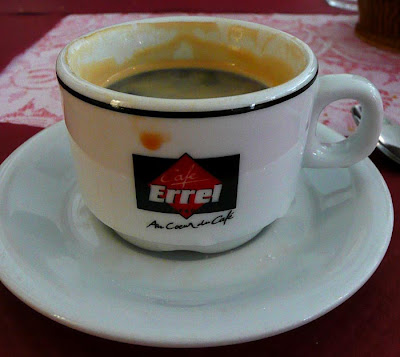 The coffee is espresso
And then there's dessert. Floating islands was one choice yesterday. We all three decided to have ice cream, or glaces. Two scoops each. There were many flavors. CHM had two scoops of black-currant. Walt had pistachio and vanilla. I had pistachio and chocolate.

Then we had coffee. The bill for three people came to 37 euros. The meal was definitely worth the price.
Posted by Ken Broadhurst at 08:07