The food at the Trumilou restaurant

So lunch at the Trumilou. The restaurant's specialty is the canard aux pruneaux, duck in a brown sauce with prunes. I imagine the sauce is made with red wine, but I don't know for sure. 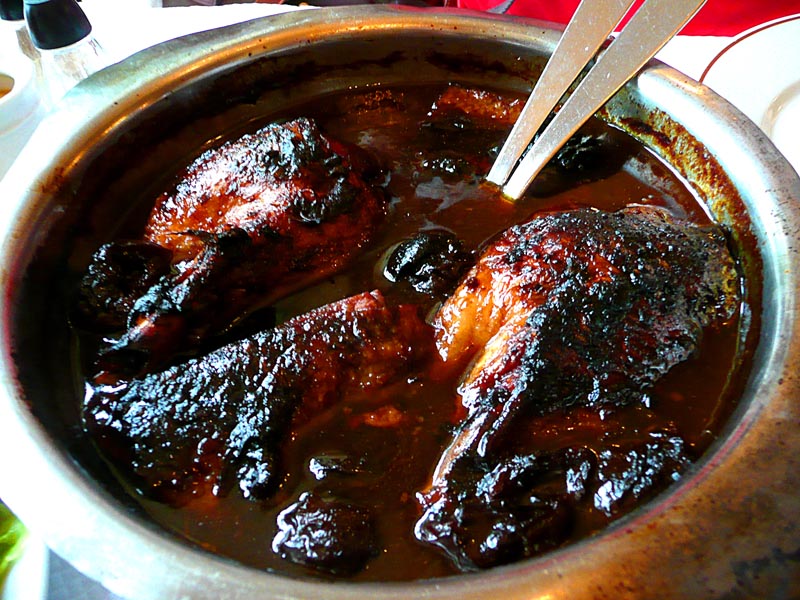 Canard aux pruneaux at the Trumilou restaurant
near the Hôtel de Ville
For once, I decided to have the dish that the restaurant is known for rather than a dish that sounded more exotic, or something I don't make at home. It meant ordering à la carte rather than a prix fixe menu. Claude decided she was going to have the same thing. That put the pressure on me: this restaurant had better make a good canard aux pruneaux, I thought. Otherwise, Claude was going to think it was my fault! 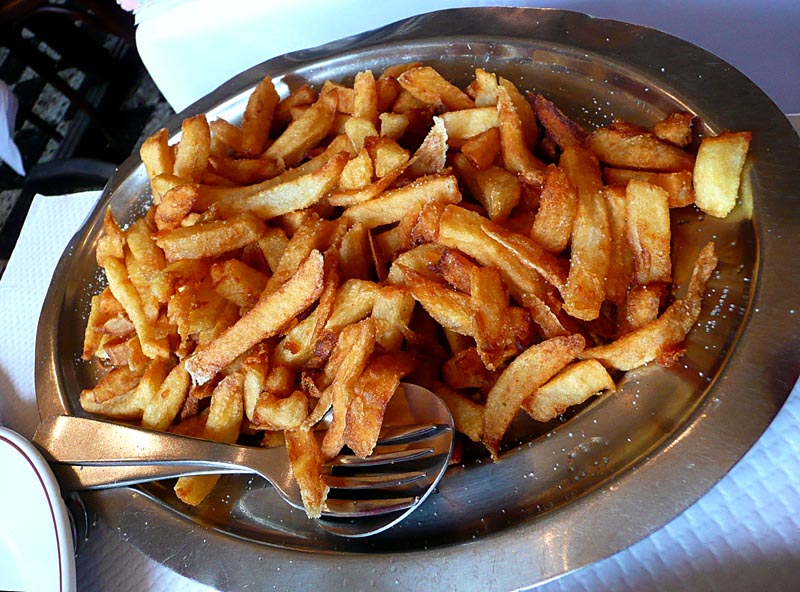 Pommes frites
Often in restaurants I have a hard time making up my mind, so I hesitate and hem and haw and at the last possible moment I choose a dish that ends up disappointing me. Advice to self: play to the restaurants strong suit. If the canard aux pruneaux or andouillette grillée is what the place is known for, have that. Seems simple enough, doesn't it? 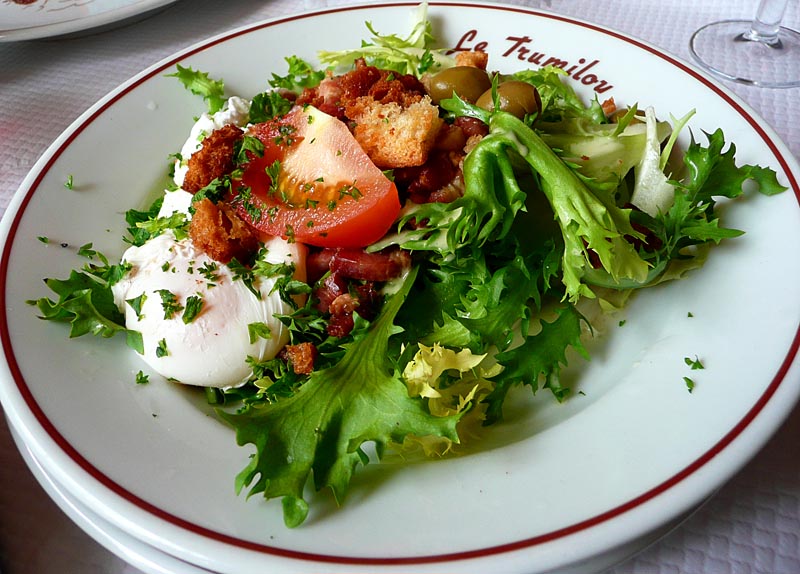 « Frisée aux lardons et son œuf poché »
Cheryl wanted to be raisonnable, sensible, so she ordered a salad. She had already had quite a few restaurant meals over the past few days. Well, she missed out on the duck. And her salad turned out to be more cheese than greens — bland cheeses like mozzarella, at that. 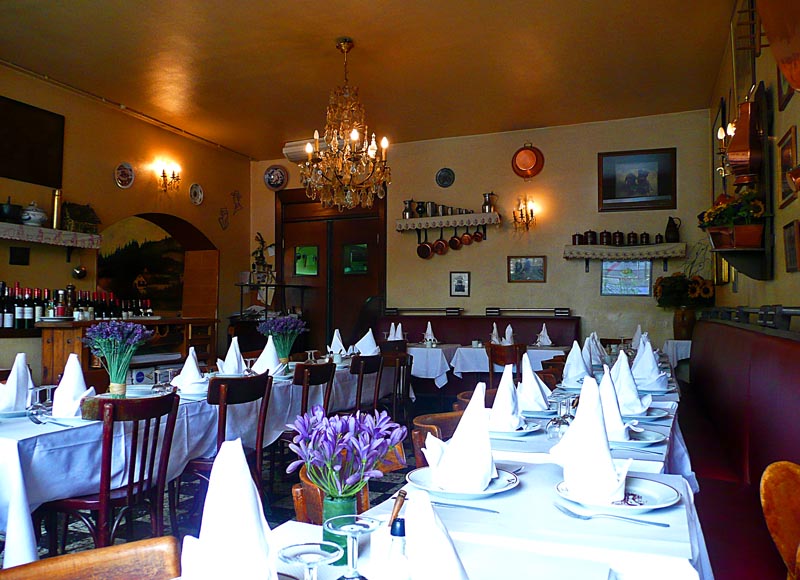 The "tired" décor at the Trumilou
Claude ate frites off the serving platter rather than put a pile of them on her plate. She said she thought she might eat fewer of them that way. They were very good, by the way: in one review I had read, somebody commented that the frites at the Trumilou could stand to be crispier. Well, they were plenty crispy. I went ahead and piled some on my plate — probably twice. When will I learn... 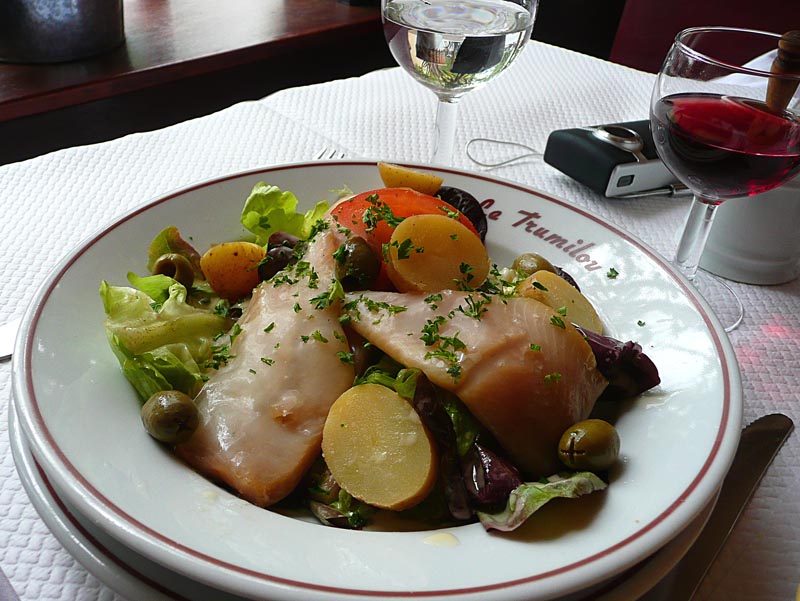 Filets de hareng et pommes à l'huile,
another French classic
The duck was tender and almost falling off the bone. The sauce was rich but not too thick and certainly not gloppy; as I said, it probably was made with red wine. And the prunes were well cooked. Their sweetness complemented the salty tenderness of the duck, which included two thigh & drumstick pieces and two pieces of magret, the breast. 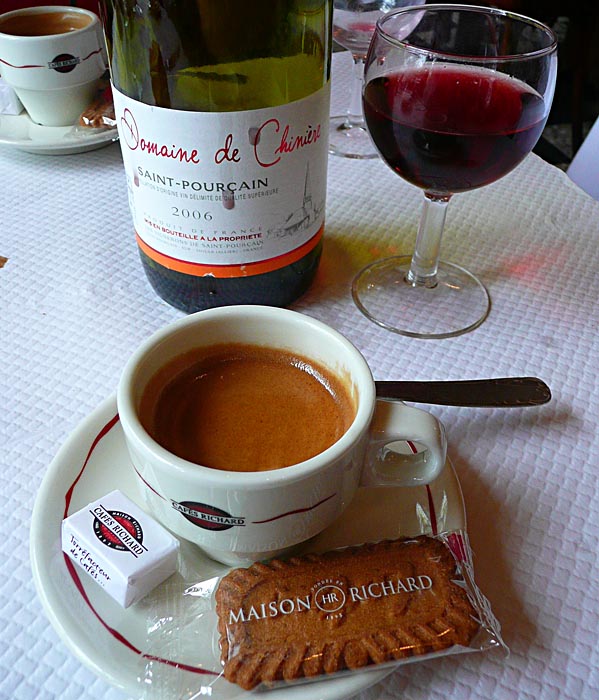 Saint-Pourçain wine and an after-lunch espresso
As an appetizer, Cheryl chose a salad with pickled herring (filets de hareng, pommes à l'huile), Claude had a simple green salad with vinaigrette, and I had frisée aux lardons et son œuf poché, a salad of curly endive with bacon and a poached egg. Cheryl said her herring was not very salty, and I thought the same thing about my salad: it could have benefited from a little more salt, which is unusual in a salad containing lardons.

With our meal, we had a bottle of the restaurant's house wine, a Saint-Pourçain red. I asked the waitress what grapes the wine is made with, and she went off to ask somebody. She came back and said it was an assemblage of Gamay and Pinot Noir varietals. It was just right with the duck and prunes: light and drinkable, fruity and dry.

So there you have it. We had a good meal and we were the last customers to leave the restaurant after the lunch service. In other words, we closed the place down. And then we went around and took a lot of pictures of the décor, which the guidebooks and Internet restaurant review sites consistently describe as old-fashioned if not frankly tired and worn. I didn't agree: I thought the décor was just fine and provided a perfect backdrop for the experience and the classic French country-style food.
Posted by Ken Broadhurst at 09:20