The main courses at the Café Louis-Philippe

Here's the story of the rest of the lunch we had last Tuesday at the Café Louis-Philippe in the Marais district of Paris. After our so-called salads — in France, a first- or main-course salad often contains as much meat or cheese as it does salad greens — we moved on to the mains 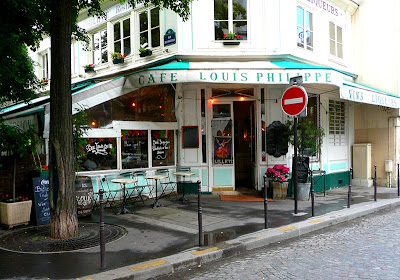 Café Louis-Philippe on the Seine in Paris
In fact, we didn't order full main courses. Instead, we ordered off a short list of petits plats — small plates. The waitress assured us that the salads plus a petit plat wouldn't be too skimpy to make a perfectly good lunch. And she was right.

Since we still had quite a bit of wine left in our bottle of Pouilly, believe it or not, we both decided to order main dishes that would go with the dry Sauvignon Blanc. In restaurants, I often try to order something that I don't make at home. This time it was a quenelle de brochet — a fish dumpling that is first poached and then covered in a béchamel sauce and put in the oven to brown on top, or gratiner. A brochet is a river fish— a pike in English. There's a recipe in French for making quenelles on this blog. 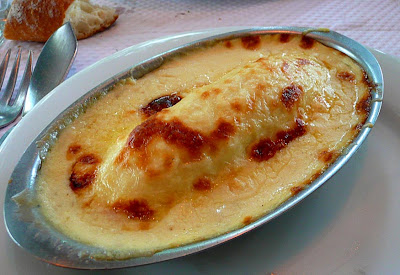 Delicious: a fish dumpling in béchamel sauce
(quenelle de brochet au gratin)
Cheryl decided to have a dish that she doesn't make at home and that you don't see in America very often: cuisses de grenouille or frogs' legs. These were cooked à la provençale — in a garlic-parsley butter with tomatoes and zucchini, and also steamed potatoes. The frogs' legs were lightly floured and then panned in butter. 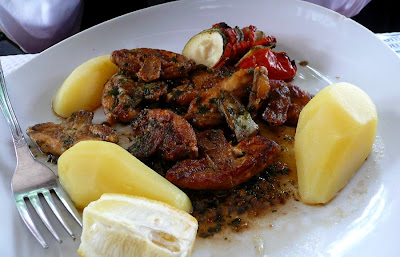 Contrary to what you might think, people in France
don't eat frogs' legs very often.
When we finished the main courses, the waitress came to clear away the plates. She asked us if we had finished licking them! Afterwards, we decided to have some cheese. The service got bogged down at that point and we waited a few minutes. Actually, the waitress forgot that we had ordered cheese and some red wine — she came back to the table and asked a second time if we wanted cheese or dessert. 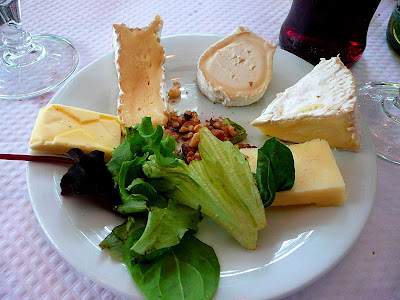 The cheese plate at the Café Louis-Philippe — plenty for two people
So it took a few minutes. We got a half bottle of Gamay wine and we thought we would each get a little plate of cheese (at €6,50 a plate). But when it came, there was only one plate, and that was good because it was a lot of cheese. We certainly didn't need two servings. There was brie, camembert, cantal, goat cheese, and butter. 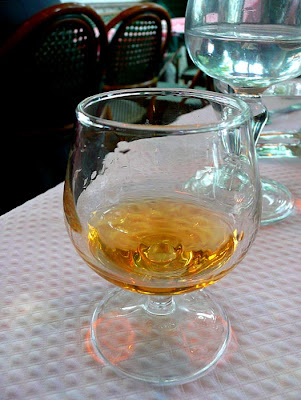 Calvados
At the end of the meal, after coffees, when it came time to pay the bill (€90, kind of expensive but then it was a great meal with a very good wine), the owner of the café gave us two snifters of calvados — Normandy apple brandy — on the house. Then we took a walk around the neighborhood before we went to get the car out of the parking garage for a ride around the city.
Posted by Ken Broadhurst at 08:08