CHM and I had driven up to Contres Friday afternoon to do some shopping at the big SuperU store up there. We were wandering through the butcher section when there, on a shelf in a refrigerated cabinet, we saw packages of lamb kidneys. (And also packages of chicken livers, of which I bought some too, but that's an organ of a different color). 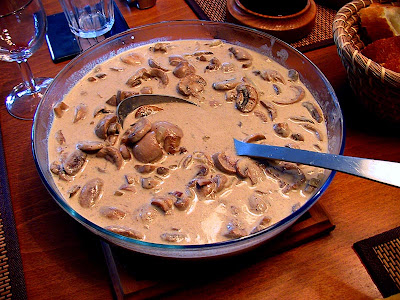 CHM said he had never tried lamb kidneys before, but he has cooked and enjoyed veal kidneys many times. I used to cook lamb kidneys back in the 1970s when I lived in Champaign-Urbana, Illinois, but hadn't cooked or eaten them in about 30 years.

Back then, I must have had them in France once or twice between 1970 and 1976. Remembering that, one day I went to the a supermarket in Champaign and looked around. No kidneys were to be found. I rang the bell and talked to a butcher. He said he could order me some lamb kidneys but it would take 48 hours to get them in. Fine, I said. I'll come back day after tomorrow.

When I went back, the butcher carefully wrapped up the five or six kidneys and handed them to me. "Your cat is going to feast on these tonight and tomorrow, I bet," he said. I just smiled. 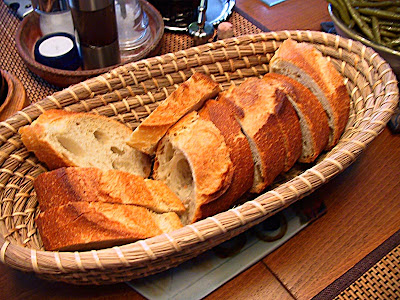 How about some good bread to soak up the sauce with?

« Les rognons d'agneau sont les plus fins des rognons. » That's what it says on one web site I found: "Lamb kidneys are the choicest of kidneys." That same web page gives a recipe that is about the same one that I used back in the late 1970s. I followed it yesterday. Here it is in general terms.

What you need is about two lamb kidneys per person, mushrooms, an onion, cognac (you could use white wine), cream, Dijon mustard, salt, and pepper. Lamb kidneys weigh two or three ounces each.

Cut the lamb kidneys in two — butterfly them, in other words — and with a sharp knife remove the lump of fat in the top middle of each half (sorry, I didn't take any pictures). Cut each kidney half into three or four pieces, or slice them thinly if you prefer. 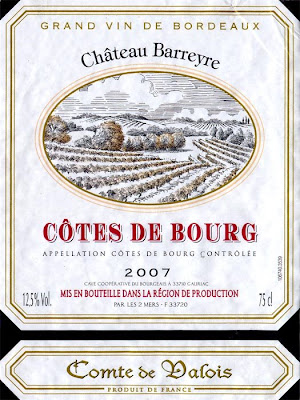 And a nice bottle of Bordeaux red...

Put all the pieces of kidney in a cold water bath for an hour or so to disgorge them. You can add a squirt of vinegar or lemon juice to the water if you want — that takes away any gamy smell. Change the water two or three times over the course of the hour and then rinse the kidney pieces well under cold running water.

Meanwhile, clean and slice about half a pound of mushrooms — or more if you want. Sauté them in some butter or oil. Also chop a medium onion or a couple of shallots and sauté those too. Slice, chop, or mash some garlic and add that too if you want to. 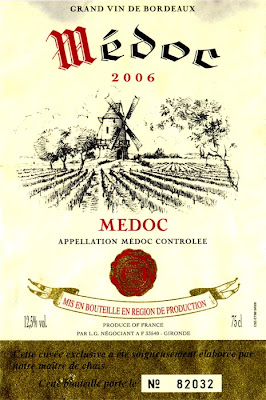 Put the mushrooms and the onions/shallots/garlic aside. Sauté the kidney pieces in the same pan at very high temperature. Don't cook them for more than five minutes (less time for smaller pieces) or they might get tough and rubbery. When they have browned slightly, pour half a cup or so of cognac or armagnac into the pan and let that evaporate. Grind in a good quantity of black pepper, along with salt to taste.

Finally, add about a cup of cream, a big tablespoon of Dijon mustard, and the sautéed mushrooms and onions. As soon as the sauce is hot and bubbling, the kidneys are ready to eat. Serve them with rice, pasta, boiled potatoes, or French fries. And a green salad or some steamed green beans.

The British eat kidneys in their traditional steak-and-kidney pie. I don't think many Americans eat them at all. Have you ever tried them?
Posted by Ken Broadhurst at 09:16