I don't plan to use the French keyboard that will come with my new computer, which is scheduled for delivery on Monday. I still have a couple of American-layout keyboards lying around, and I'll use one of those.

What are the main differences between the two layouts? One has to to with accents, which French is full of and English doesn't use. There are keys and key combinations that make it easier to enter accented characters: é, à, ô, ç, ï, etc. There are so many more characters on the French keyboard that there is an extra ALT key to make it possible to type them.

That's fine. But there are two or three small differences in key placement that make it very hard to adapt to the French keyboard if you are a touch typist (remember that expression?). The first is that the A key is in the place of the Q, and vice versa. So you really have to work to train yourself not to type qnd for and and hqve for have, and so on. You can see how that would really slow you down.

All that makes it nearly impossible for somebody who knows the American English keyboard to type on a French keyboard. Think about that when you plan a trip to France and think you'll just pop into an Internet café to check your mail and send a few quick messages to friends and family. It's very frustrating.

I learned the French keyboard at one time in my life. I lived in Paris from 1979 to 1982 and worked as a teacher and translator. I had to have use of a typewriter (this was before computers were widely used). What I ended up with was a tiny blue manual typewriter with a French keyboard. To some of you, the term "manual typewriter" might not mean much. 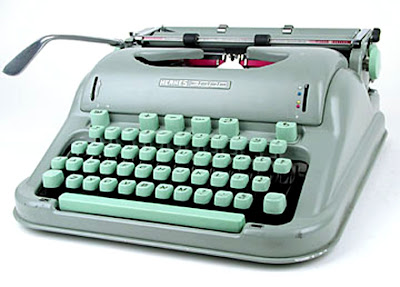 Look Ma, no power cord!
I got to be pretty proficient with that little machine. Then I moved back to the U.S. in 1982 and I had to learn the U.S. keyboard all over again. For a few weeks I again typed qnd and hqve, not to mention zho, zhich, and zhqt, most of the time. At least I was working on a computer by then, so I didn't have to keep quarts (auqrts?) of White-Out on hand.
Posted by Ken Broadhurst at 06:48