As usual, I have many more pictures than I can post or than you could possibly want to see. Yesterday morning, I picked Claude up at the Grand Hôtel de Saint-Aignan, just a couple of miles up the road from our house. I got there at 8:30, and Claude was already out warming up her camera. She was taking pictures, in other words. 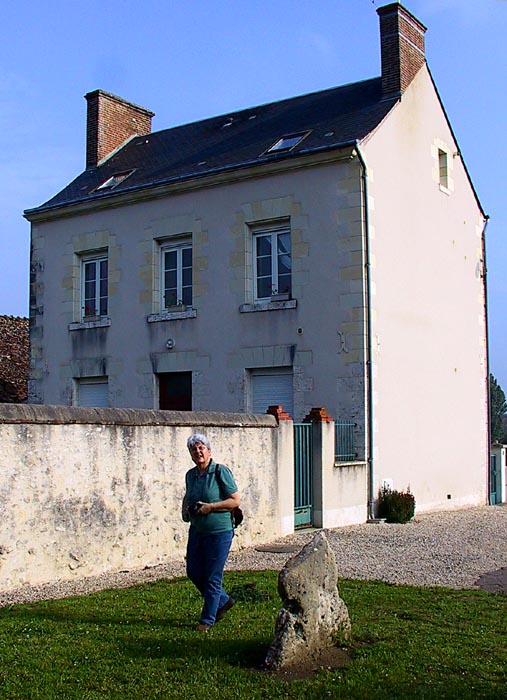 Claude in Méhers sizing up the old church for a picture.
We wondered if the stone in the foreground was a menhir.

I needed to drop my car off the have the air-conditioning serviced (yes, the weather has turned warm, verging on hot) so Claude followed me to the garage across the river in Noyers-sur-Cher. We left the car there and Claude did the driving as we spent the morning over on that side of the river. We drove up through the wine village called Saint-Romain-
sur-Cher and out into the countryside, headed for the villages called Méhers and Chémery. 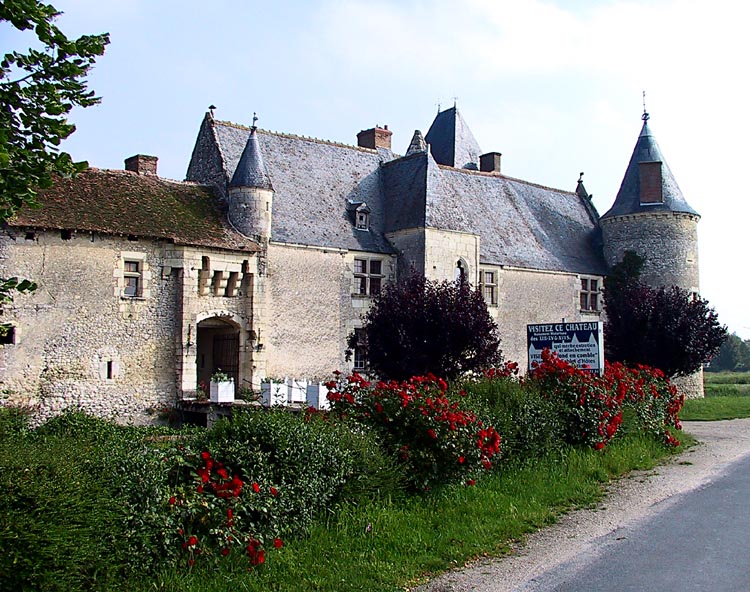 At Méhers, we stopped to see if we could go inside the old church, but the doors were locked. So we drove on to Chémery to see the château there. All of this is within 15 minutes of Saint-Aignan by car. The weather was clear, and it was warm and muggy even at 9:00 a.m. 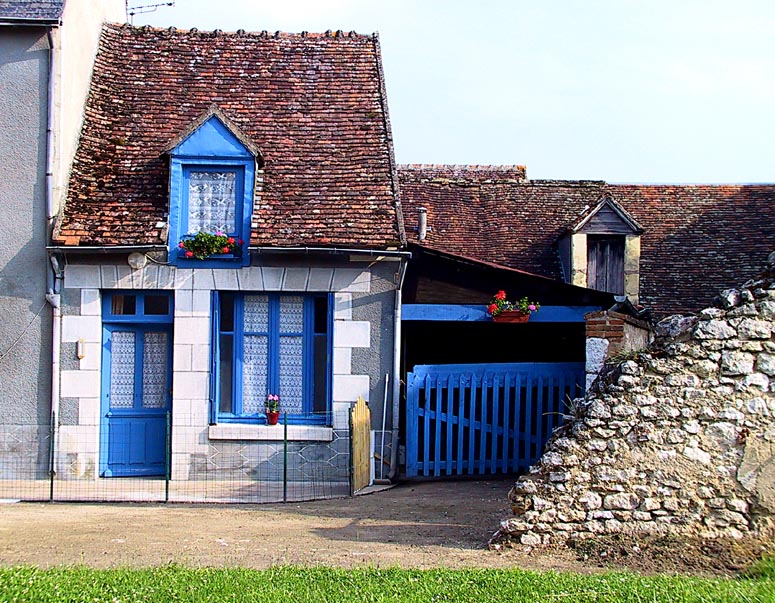 A blue-trimmed house near the château in Chémery

At Chémery, where the 15th century château has been a restoration project for its owners for the past 25 years, the moat was full of reeds and croaking frogs. We looked for a while to see what these frogs looked like, but they remained invisible while being highly audible. 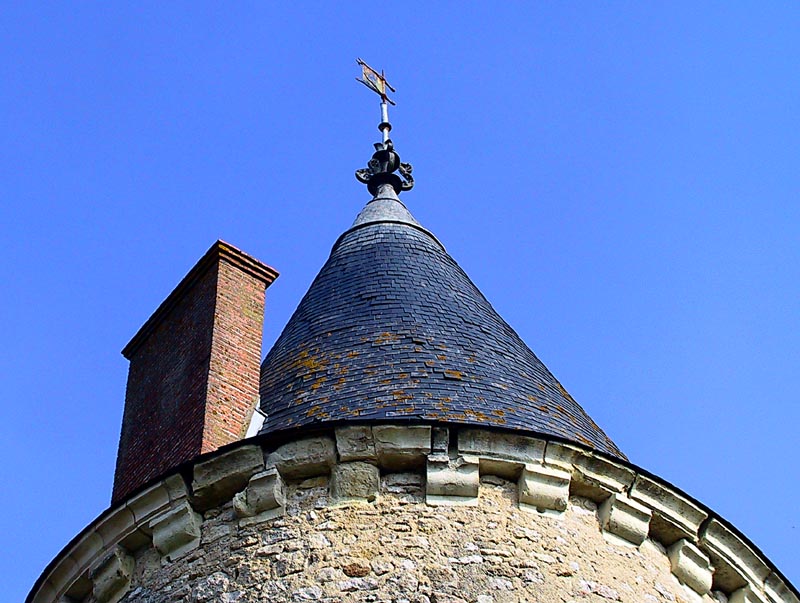 We walked all around the château and into the courtyard. Parts of the roof are stripped of tiles, leaving the wooden slats underneath exposed. In other words, the restoration work is ongoing. There was nobody around, and the big dog that I've seen guarding the courtyard on past visits was nowhere to be seen. We had the place all to ourselves. 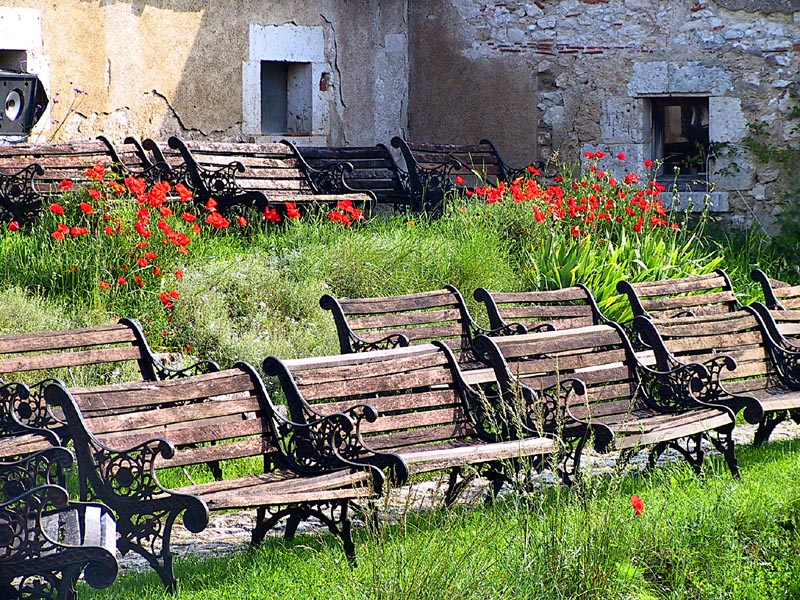 In the courtyard of the château a little outdoor theatre had been set up; I don't know what kind of performances are put on there. The theatre consisted of an old stone pad that serves as a stage and rows of old park benches that provide seating for the audience. It's all very rustic, as you can see. Red poppies grow all around. 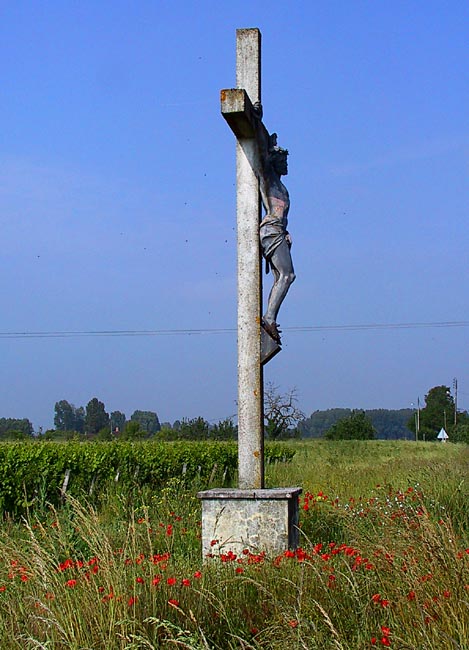 Just outside Chémery, on the road to Méhers,
stands this impressive calvaire, a roadside crucifix.

After a walk around Chémery, we headed back toward Méhers and would have continued on to Noyers-sur-Cher to see an old chapel there, but the cemetery in Méhers caught our eye. We decided to stop and talk some pictures there, and as it worked out we ended up getting a guided tour the old church thanks to the hospitality of the village mayor. 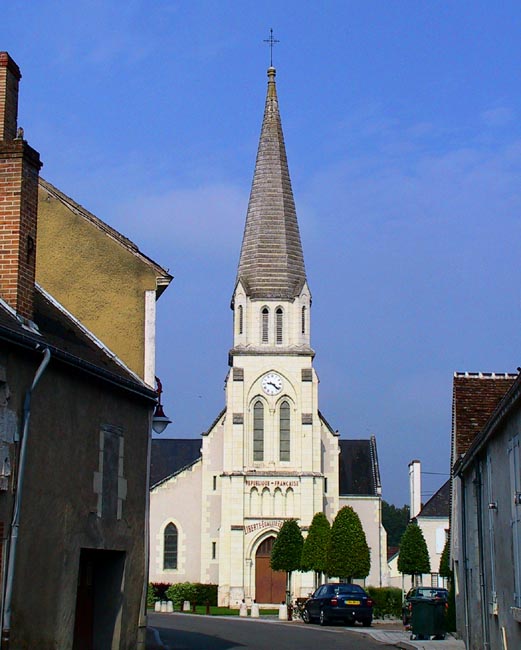 The church in Chémery carries the inscription
République Française — Liberté, Egalité, Fraternité on its front.

Tomorrow, more about Méhers and the other places we visited yesterday morning — the chapel called Saint-Lazare in Noyers (inhabited by a big white owl) and the Château du Gué-Péan in Monthou-sur-Cher (with its stables and horses). 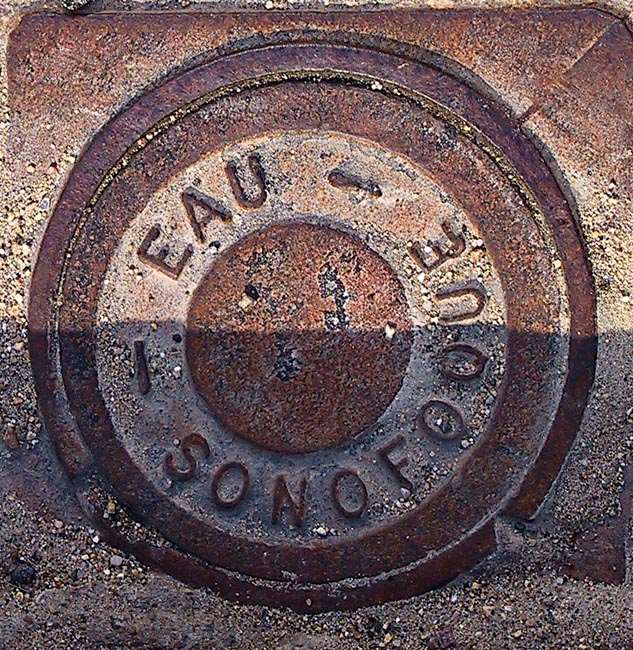 If you know Claude's Blogging in Paris site,
you'll recognize this as a squared circle (or squircle).