Heavy weather and a scared dog

As Walt has written on his blog, we had a gully-washer (also know as a frog-strangler — how appropriate!) of a rainstorm this morning between 7:00 and 8:30 or so. I just checked the rain gauge — it was close to overflowing, and the amount of water in it was higher than the highest graduation mark, which is 30 mm. 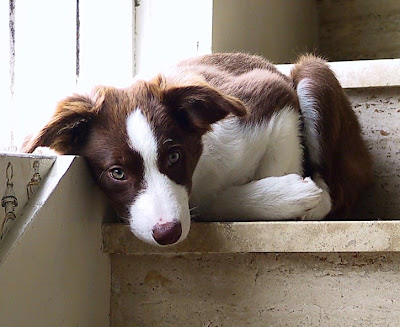 Callie posing on the stairs, 31 May 2007
So I can only estimate the total rainfall, which I'm putting at 35 mm — that's 1.4 inches in about an hour. There were big puddles all around the house, which is something we almost never see. Depending on where you live, this much rainfall in such a short amount of time may or may not seem like a big deal. Here, it is a big deal. We won't have to water the garden for a few days, that's for sure. 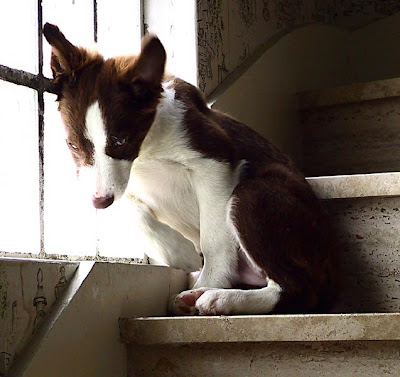 Isn't this an unusual look?
Reminds me of "her master's voice."
The worst thing is that a crack opened up in the kitchen ceiling a water gushed in — well, it dripped in, in pretty big drops. The insurance company will have to tell us what they think happened and what they can do to help us get it fixed. I'll call or go see Mme Janvier in the morning. Her office isn't open on Mondays. 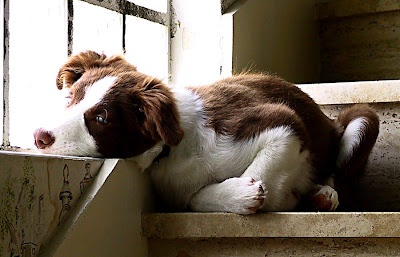 Getting bored with the photo shoot
OK, just called the insurance company. Our agent, Mme Janvier, is on vacation. I have to write a letter stating that as a result of a violent thunderstorm and heavy rain, there was a "infiltration" of water in the kitchen at my residence and the plaster and paint were damaged. Then I have to get estimates for the repair work. At that point, the insurance company will decide whether to send out an claims adjuster to inspect the damage. 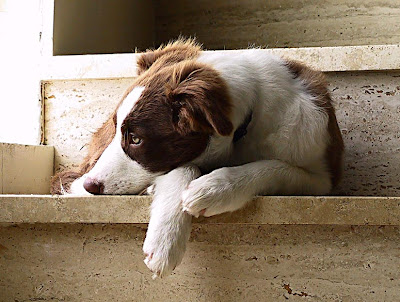 Pretending to look elsewhere
At one point this morning, after the first hard downpour but before the hardest rain fell, I went out on the front deck (la terrasse) to sweep the water off. Callie came out with me. While she was chasing the broom around as I tried to sweep, there was a very close and very sharp lightning bolt and, immediately, a deafening clap of thunder. 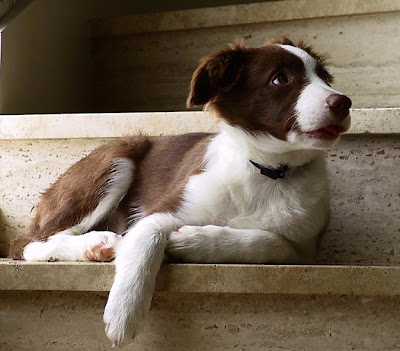 Getting ready to speak her mind?
Callie looked panic-stricken and turned and ran into the house. Her feet were wet so she went sliding across the tile floor and crashed into a bookcase. With her tail between her legs she headed for the stairs to go down and hide, I guess, in the utility room or garage. I called her back and then Walt calmed her down. We had some more close lightning and loud thunder. Poor Callie. It's all new to her.

Oh well. Got to write that letter to the insurance company.
Posted by Ken Broadhurst at 07:08