Do you ever cook and eat fresh artichokes? If you are in California, probably. Elsewhere, maybe not. Most of the artichokes grown and sold in the U.S. come from the northern California coast, I believe. In France, a lot of them come from Brittany, which has a similar coastline as far as geography and climate go.

But even here in Touraine, our neighbor François, who lives down at the end of our road where it joins up with the highway, has six or eight huge artichoke plants in his garden. His plants are about four feet tall and are covered with big artichokes — there must be at least two dozen of them. I'll have to go take a picture. 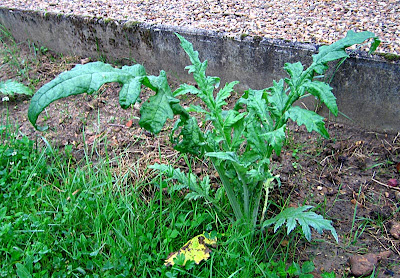 Our artichoke plants are just starting to grow now.

We planted artichokes ourselves a month or so ago. They are starting to grow. I hope they have put down a lot of roots by now. Somebody told us not to expect them to produce any artichokes the first year, so we won't. We have five plants, and maybe we'll get a good crop in 2008, if the plants survive the winter.

Yesterday morning I went shopping at the SuperU supermarket in Saint-Aignan. I noticed these big globe artichokes in the produce department, and I bought two for our lunch today. Each one is about six inches (15 cm) in diameter. 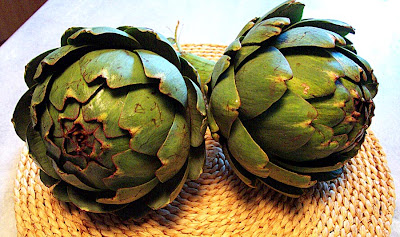 Artichokes from SuperU in Saint-Aignan

A year ago we were in Paris in the springtime. One day we took a walk around Les Halles. On the rue Montmartre, near the church called Saint-Eustache and not far from the famous restaurant called Au Pied de Cochon, there was a street market set up to sell produce, meats, and other food products.

I noticed that one vendor had beautiful globe artichokes on his stand. They looked pretty much like the ones I bought at SuperU this morning. We were staying in an apartment near Arts et Métiers and eating most of our evening meals there. The artichokes looked like something good to fix for dinner, steamed or boiled and eaten warm or cold with vinaigrette or mayonnaise.

So I approached the vendor's stand and said I'd have two artichokes, s'il vous plaît. The man picked out two nice ones, weighed them, and dropped them into a plastic bag. That'll be 29 euros, he said. 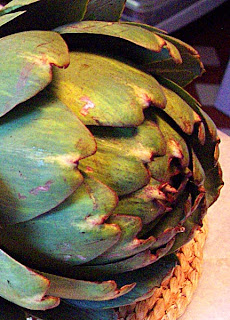 Twenty-nine euros!
I was flabbergasted. That's nearly $40.00 U.S., for two artichokes. How ridiculous can you get? I told the man that they were far too expensive, and said I'd changed my mind.

He acted like he was offended. "I'm glad most of my customers aren't like you," he said in French. I told him I was sure he was glad of that. He was ripping people off big-time if he was selling any artichokes at all at that price.

The lesson: in a French market, don't be afraid to say you've changed your mind if you are surprised at the high price of some item you thought you wanted to buy. And buyer beware. You won't be able to bargain — that's not really the custom in France — but you can always just say no.

How much did I pay for the two artichokes I bought at SuperU this morning? Well, they were 90 eurocents apiece — that's about $1.20 each, or $2.40 for the both of them. Compare that to nearly $40 for two artichokes at the market in Paris.
Posted by Ken Broadhurst at 14:07