I'm in the throes of setting up my new computer. Did you know that all the disk connectors for data and power have recently been changed? Now the disks have SATA, not IDE/ATA, connectors. Who knew? That means the older disk I have, the one with all my digital photographs on it, won't work in the new computer. 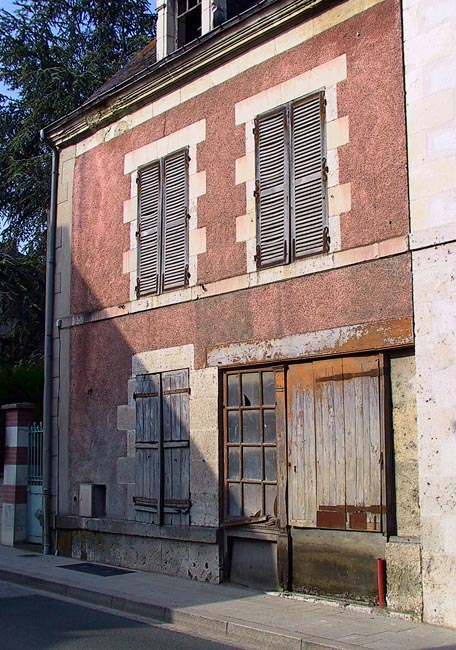 A house in need of repair in Chémery

Fortunately, I wasn't planning to keep that disk and use it in the new machine. It will go into Walt's machine to boost his computer's storage capacity. His computer is a couple of years old and is based on the old IDE standard for hard disks and CD/DVD readers and burners. 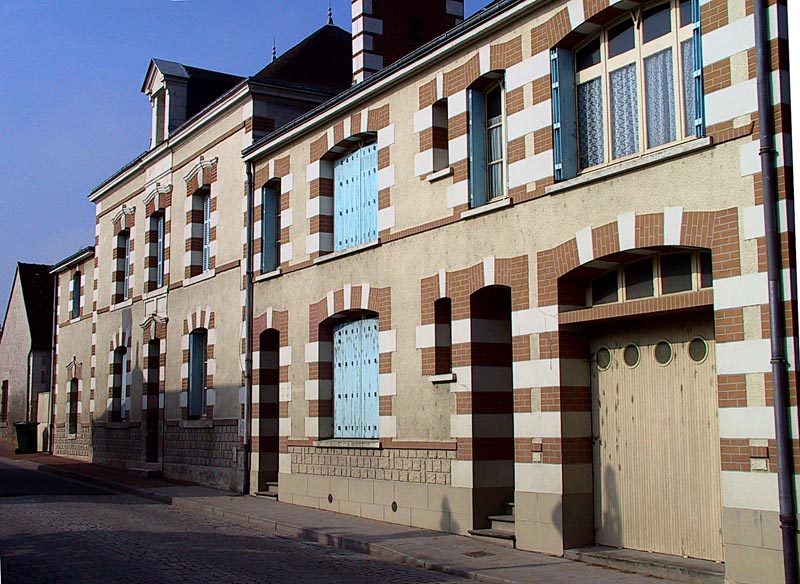 Be that as it may, I did count on installing the old disk in my new computer long enough to copy the 120 GB of pictures off it and onto the new hard disk. Since that wasn't possible, I've spent the last three days copying all that data off the old computer and onto the new one over our home network. That has taken many dozens of hours over several days. But it is done now. 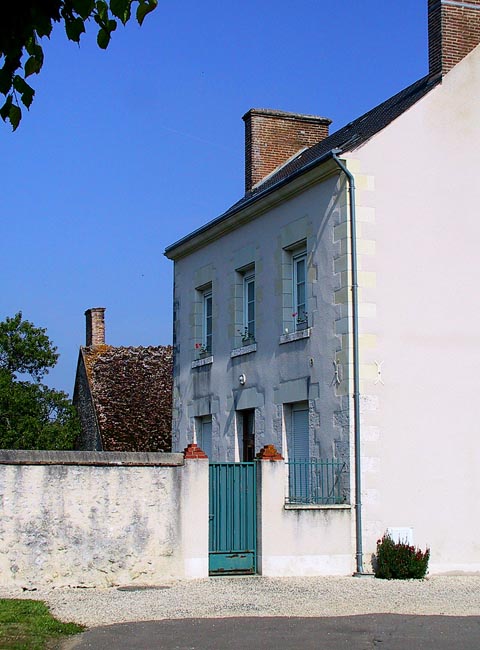 A house on the Place de l'Eglise in Méhers

I also have two DVD burners in my old computer that won't work in the new machine. Anybody want one? You need a computer that can use IDE-standard devices. Again fortunately, the new computer has a DVD burner in it. I don't really need two burners, but I do need two CD/DVD readers because I have two French dictionaries that require me to keep CDs in the drives to be able to run them. And I use them all the time. So now I have to buy a new DVD reader that will work with the SATA connectors. 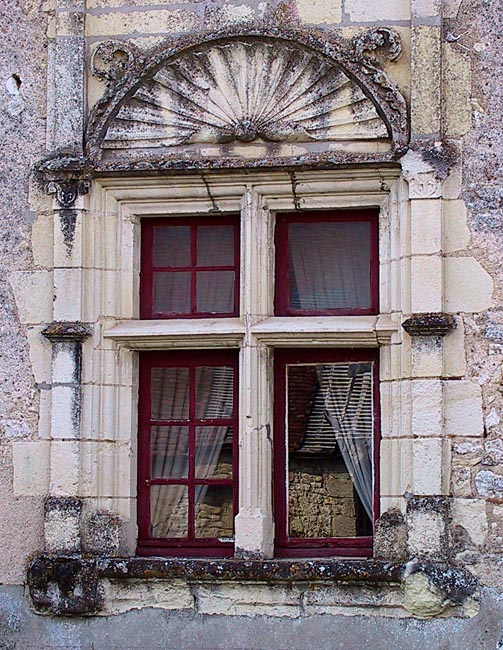 A window at the château de Chémery...

Oh, and by the way, my nice old IBM keyboards won't work with the new computer either. I am sorry to have to give them up, because they are heavy, solid, and quiet. They've been a pleasure to use over the years. But neither will work as USB devices. They connect to a PS2 port on the old computer, and the new computer doesn't have a PS2 port. 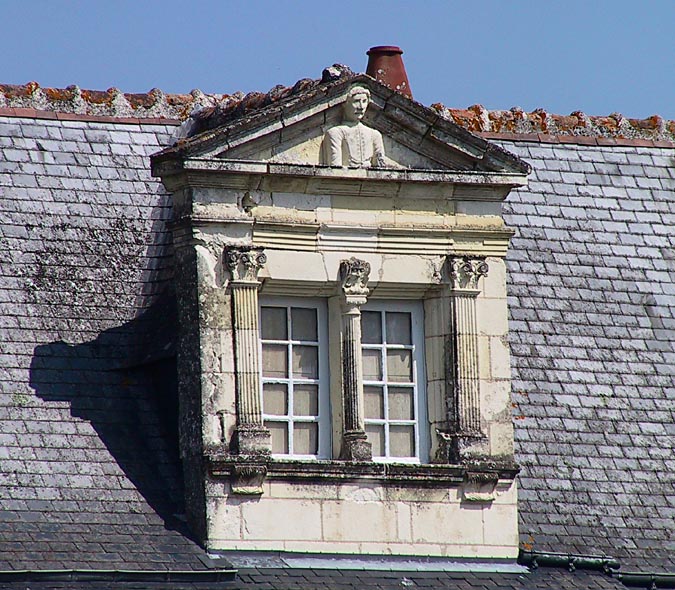 ...and one at the nearby château du Gué-Péan

On Tuesday I went to our one local computer store and bought an adapter that is supposed to let you plug a PS2 device into a USB port. I plugged it all in, and it didn't work. I tried it with my two PS2 keyboards and with my PS2 mouse. Nothing doing. 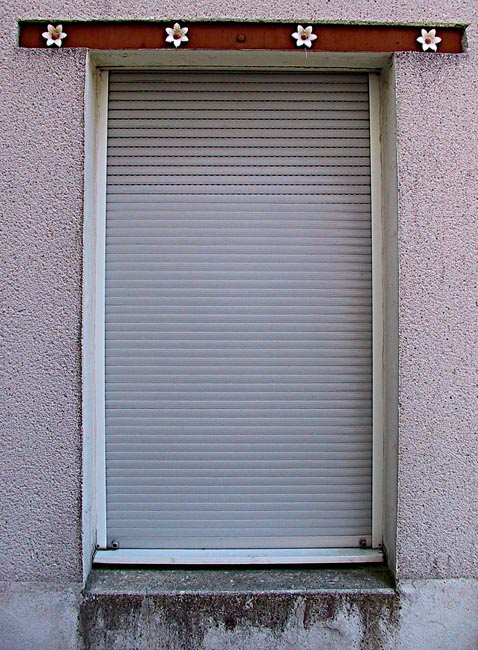 A window, shuttered, in the Salle des Fêtes in Méhers...

Then I looked more carefully at the package the adapter came in. It says: Adaptateur pour brancher sur un port USB une souris PS2 prévue pour fonctionner également en USB (adapter to plug a USB-compatible PS2 device to a USB port). My PS2 keyboards and mouse don't qualify — they were not designed with USB capabilities, I'm sure. They are too old. 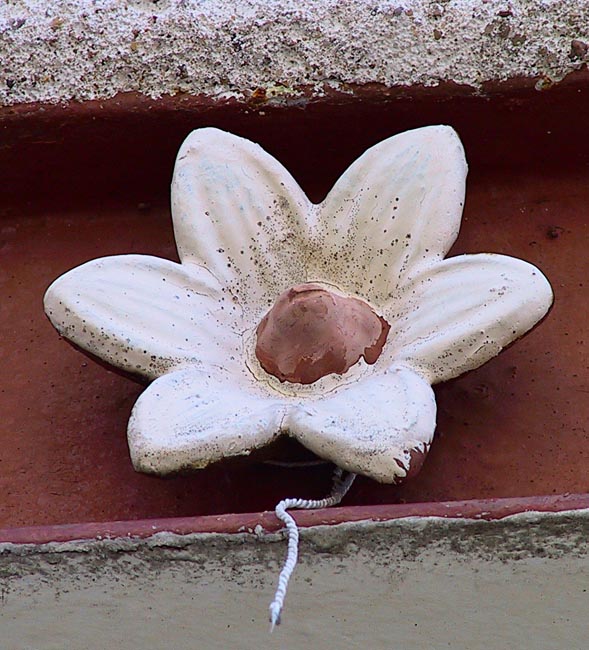 ...and a detail from the same window (a decorative screw head)

I went back to the computer store to take the adapter back and order a US-standard QWERTY keyboard. It should come in next week. Meanwhile, I've set up the French AZERTY keyboard as if were a QWERTY model, and as long as I don't look at the keys while I'm typing, it's fine. If I look at the keys, however, I get confused, because they aren't labeled "correctly."

Meanwhile, I'm posting a few photos of houses and windows that I took earlier this week when I was out riding around with Claude. 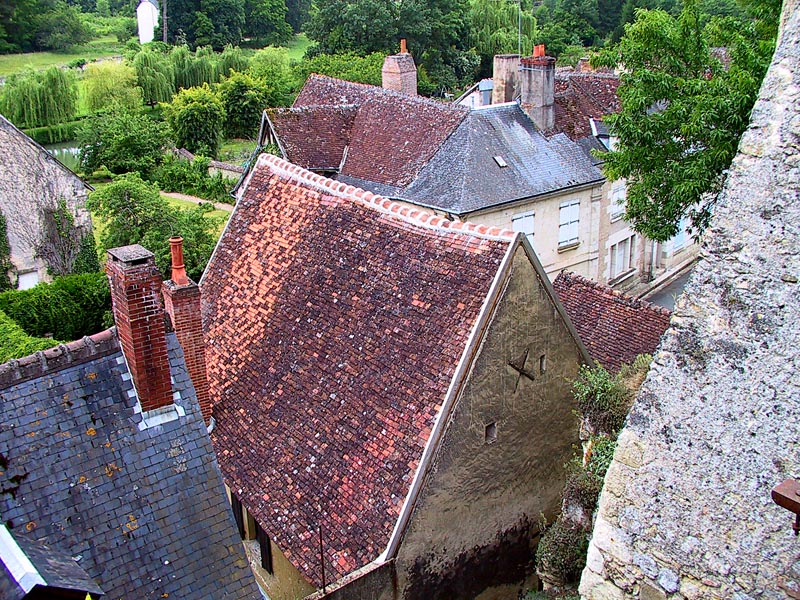 The rooftops of Montrésor, 20 km south of Saint-Aignan

Speaking of houses, in Saint-Aignan there are two old townhouses on the market square (where the farmers' market is set up on Saturday mornings) that are being remodeled for sale. One is finished and has been on the market for a few months. Work on the other house started in March.

The people doing the remodeling are English. They have lived here for nearly 20 years and they have remodeled several houses over that time. The new house is three stories with steep interior staircases. The living room and kitchen are on the ground floor, and there are two medium-size bedrooms on the second floor U.S. (premier étage in French). The third floor is a very big space that could be used as a TV or game room, more sleeping space, or whatever. 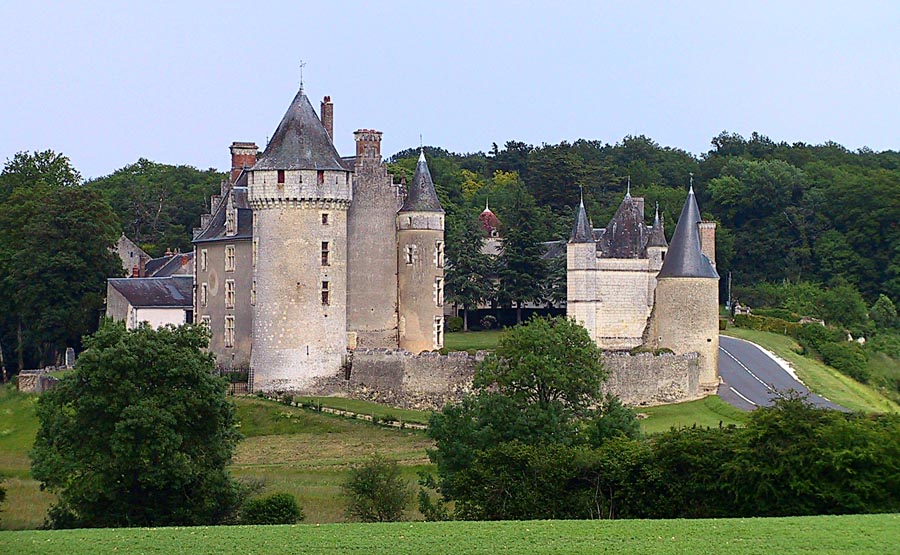 The ultimate in French housing styles: the château de Montpoupon

From a window on that top level, there is a drop-dead view out over the rooftops of old Saint-Aignan looking toward the church. The place would almost be worth buying just for that view — not to mention its location in the center of town, right on the market square.

We went to see the remodeling work yesterday but I didn't have my camera with me. I'll go back and take some pictures next week.

Callie went to see the vet yesterday. She has gained 2.3 kg in a month and now weighs a little over 8 kg. That's a gain of just over 5 lbs. and a current weight of 18 lbs.
Posted by Ken Broadhurst at 08:49