We had a pretty nice day in Saint-Aignan yesterday, though it wasn't particularly warm, and there were times when it got pretty windy. It didn't rain — that's what makes me say it was pretty nice. On the radio they're saying another front is moving in off the ocean this morning, so we can expect rain this afternoon. So what else is new? 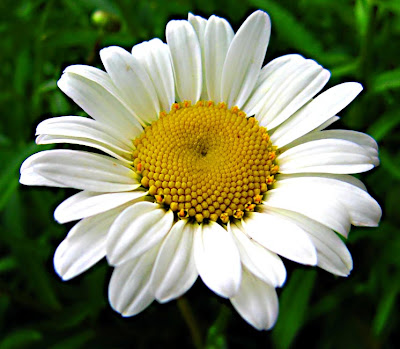 Despite the rain and cool temperatures,
daisies are starting to bloom in the yard
I took Callie out for a walk in the late afternoon; I'm trying to make a habit out of doing that. We had walked out just a few hundred yards and were approaching the little cabane de vigneron — the vineyard workers' shed. These little stone buildings are used nowadays exclusively for tool and equipment storage, but in the past they were a place to spend the night instead of walking all the way back home and returning early the next day to continue working in the vines. I noticed a white car parked next to the cabane. 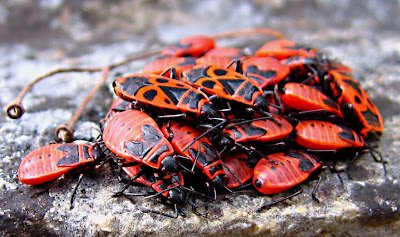 What to you suppose these gendarme bugs are up to?
Then off to the right, on a tractor trail that runs diagonally off the gravel road, I saw an older gentlemen dressed in blue work clothes and accompanied by two dogs. I waved bonjour his way and planned to walk on by with Callie, who was trotting along right next to me. Then I saw the man's two dogs running toward me at full speed. Uh-oh.

Callie saw them too and turned a ran at full speed herself, down a row of grape vines back toward our back gate. She was headed home. One of the man's two dogs was right behind her, but the other one stopped and stayed near me. I turned around and walked down a row toward the back gate too, figuring I would find Callie sitting there waiting to be let into the yard. 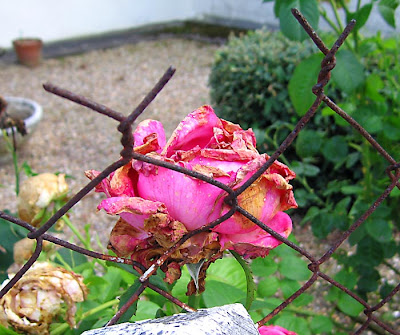 A fading rose in a neighbor's yard
When I got to the end of the long row and could see the back gate, there was no Callie in sight. Then I saw the man in blue waving at me, telling me that Callie had come back to him with his dog. So I walked back around the pond and up the gravel road to where I had started.

The man turned out to be Monsieur Denis, who owns all the vineyards out back. He is more or less retired now and his son Bruno operates the winery, along with his wife Patricia. They must be in their mid-40s. We know them and buy wine from them. This is not the first time I have seen the senior M. Denis out in the vineyard over these past four years. 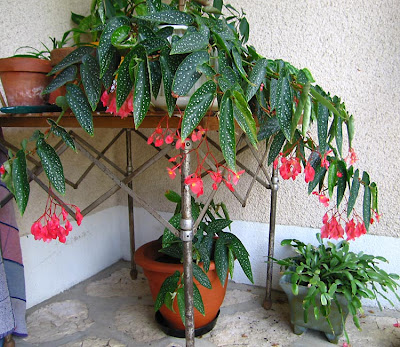 Our friend Gisèle gave us a cutting off her begonia a couple
of years ago. This summer it is thriving on the front porch.
The drooping clusters of pink flowers are beautiful.
In fact, one day in January or February 2006 I was walking Collette out there and we stopped and said hello to M. Denis. He asked me what kind of dog Collette was, and I told him she was a Sheltie-mix SPCA dog that we had brought with us from California.

A few weeks later, Collette had a stroke and died. It was mid-March. Before long, I ran into M. Denis in the vineyard again, on one of the times when I tried to go for a walk by myself out there. 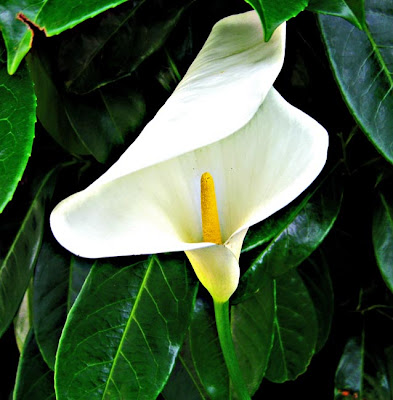 Walt transplanted some cala lilies earlier in the spring.
They enjoy the rainy, cool weather we've been having.
Yesterday M. Denis and I stood and talked a lot longer, while the dogs played. I told him Callie was not yet four months old, and he said one of his two dogs was just five months old itself. The other one is 11 years old. She's a basset hound or beagle, I would guess, and the younger one is the kind of spaniel, maybe a Brittany spaniel, that they use for hunting around here. M. Denis said it was the first time he had brought his puppy out into the vineyard to run around.

He said his work in the vineyard was finished for the season. He told me what it was he had done to the vines, but he used a technical term that went right by me. Then he said he couldn't very well get the the workers' way or do their work for them, so he was off for the summer. I got the distinct impression he wasn't too happy about the situation, but I could just hear his son telling him to take it easy and not try to do so much.

I asked him if the five-month-old puppy was a replacement for one of Bruno and Patricia's dogs, which I knew had been run over by a car last year. It was very traumatic for their children, Bruno had told me. No, M. Denis said, this puppy was his. But Bruno had taken another puppy from the same litter, so now his family had a new dog too. Both the Denis men are hunters.

Part of the Denis' vineyard
I told him that Callie is a border collie. « Ça chasse, ces chiens-là ? » he asked. Will she hunt? No, I told him, border collies are sheep dogs. I told him some friends had suggested we get a couple of sheep for the back yard so Callie would have an occupation, and he just laughed. He said he had had to put up an electric fence around his vegetable garden to keep the dogs from going in and breaking down all the plants — « ils allaient tout casser, » he said — but with sheep it would be even worse. 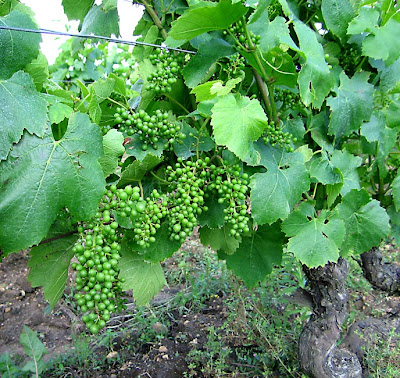 Grapes are starting to grow.
He said he'd noticed that his dogs were afraid of the wires the grape vines are strung along out in the vineyard, because they apparently thought those wires were electrified like the ones he had strung around his garden. He thought that was funny. « Chat échaudé, vous savez... » I told him, referring to the French version of the proverb that says "once burned, twice shy." He nodded and said that must be it.

After a few minutes he put his dogs in his little white van and headed for home, but not before Callie and the puppy jumped all over him and almost knocked him over. I was afraid I was going to have to pick him up off the ground, but there wasn't much I could do to keep the dogs off him and he didn't really seem to mind. 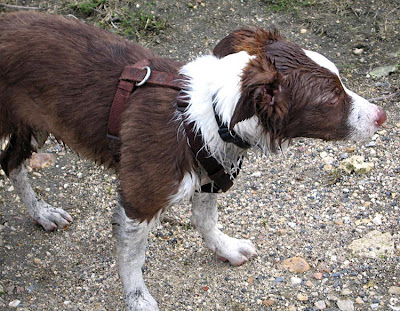 Callie after her afternoon mud bath
After he left, Callie headed straight for a big pool of standing water and did a repeat of her water-slapping act the day before. We walked on a ways, with me hoping she would dry out and rid herself of the sand and mud stuck in her fur. But I still had to wash her down when we got home, before I could let her back in the house.
Posted by Ken Broadhurst at 07:11